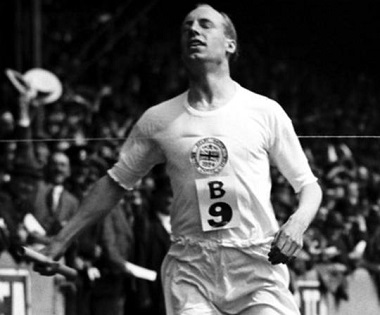 How often does a Chinese-born missionary to China become the subject of an academy award-winning movie? The people of China see Eric Liddell as their first Olympic gold medalist, even recently unveiling a statue of him.

His daughter, Patricia Liddell, commented, “My father was multi-faceted, he didn’t just appeal to religious people. He was born in China, he worked in China, he died in China. He’s their Olympic hero.”

In the movie, Chariots of Fire, he is shown running for the glory of God in the 1924 Olympics. Known as the ‘Flying Scotsman,’ he famously said: “God made me fast, and when I run, I feel His pleasure.”

When asked how he ran so quickly, he often said that he ran as fast as he could for the first half of a race, and then asked God to help him run even faster for the second half. Liddell won so much gold and silver that his mother hid his trophies under her bed at night, in case of burglary.

Missionary families often make great sacrifices for the sake of the lost. Born in 1903 at Siao Chang on the Great Plain of Northern China, Liddell, and his older brother Robert, were sent in 1912 to the Eltham missionary boarding school in London. While at Eltham, Liddell earned the Blackheath Cup as the best athlete of his year, becoming the captain of both the cricket and rugby union teams. He did not see his mother again for seven years, and his dad for 13 years. Since he only knew Chinese culture, he experienced enormous culture shock in his parents’ homeland of Scotland.

While earning a chemistry degree at the University of Edinburgh, he was not only a track and field runner, but also became an award-winning rugby player for the Scottish national team. Being painfully shy, Liddell never could have imagined that he would become the most famous person in Scotland.

Chemistry Professor Neil Campbell at Edinburgh commented, “No athlete has ever made a bigger impact on people all around the world, and the description of him as ‘the most famous, the most popular, and best-loved athlete Scotland has ever produced’ is no exaggeration.” Dunky Wright, Scotland’s greatest long-distance runner, said, “He was without doubt the most glorious runner I have ever seen . . . with such a high moral Christian character . . .”

Liddell had a unique running style that coaches tried to cure without success. The New York Times noted that he seemed to do everything wrong. The Daily Mail sketched him in a cartoon as if he were a rubber contortionist. Throwing his head back, he swayed and rocked like an overloaded express train. He was compared to a startled deer, a windmill with its sails off kilter, a terrified ghost and someone whose joints had never been oiled. Jack Moakley, the wisest and oldest of the American Olympic running team, said, “That lad Liddell’s an awful runner, but he’s got something. I think he’s got what it takes.”

It hurt Liddell deeply when many called him a traitor for being unwilling to run on Sunday at the Olympics. His strong Christian convictions led him to refuse to work on Sundays, including winning gold medals. His stunning gold Olympic win in the 400 metres turned him from a national embarrassment to a celebrated hero. The closest parallel to his new fame was Beatlemania, complete with an actual Eric Liddell fan club.

For Liddell, the 1924 Olympics was just a brief diversion on his way to serve as a missionary in China. Before he boarded the boat to China, enormous crowds came to hear him speak in churches. More than 1,000 people had to be turned away sometimes because there was no more room.

Liddell served in China as a missionary chemistry teacher from 1925 to 1943, first in Tientsin (Tianjin) and later in Siaochan. In 1941, the fighting between the Chinese and invading Japanese forces became so dangerous that he was forced to send his Canadian wife Florence and their three children back to Canada. Kissing his wife goodbye, he whispered in her ear, ‘Those who love God never meet for the last time.’

The Japanese occupiers did not allow Liddell to hold church services with any more than 10 people present. So he met nine people for afternoon tea, giving out copies of his sermon. These nine people then each met nine other people giving them copies of the sermon until everyone was reached. This became known as the Afternoon Tea Church.

Over 1,000 missionaries were imprisoned by the Japanese, many of whom died. In 1943, Liddell was sent to the Weixhan Internment Camp in modern-day Weifang, Shandong, with 1,800 other prisoners, including 100 other missionaries’ children. While interned in this 150 by 200 yard camp, he helped the elderly, taught Bible classes at the camp school, arranged games and taught science to the children, who referred to him as Uncle Eric.

David J. Michell, a child internee, remarked, “He had a smile for everyone.” Sports writer A.A. Thomson said of Liddell, “During the worst period of his imprisonment, he was, through his courage and cheerfulness, a tower of strength and sanity to his fellow prisoners.”

Sometimes he ran races against the Japanese guards in order to allow food and medicine to be smuggled in for the starving inmates.

Liddell never saw his family again, dying at age 38 in the internment camp of a brain tumour, just months before the WW II liberation. His last words were, “It’s complete surrender.”

Adopted by the Chinese as their very own, he is commemorated in a monument in Weifang, featuring these words from Isaiah: “They shall mount up with wings as eagles, they shall run and not be weary.” What might it take for us to feel God’s pleasure for the sake of the nations?

Ed Hird served for 31 years, until 2018, as rector of St. Simon’s Church in North Vancouver. His current focus is on writing books and speaking at conferences with his wife Janice.

For a review of For the Glory: Eric Liddell’s Journey from Olympic Champion to Modern Martyr, on this site, go here.