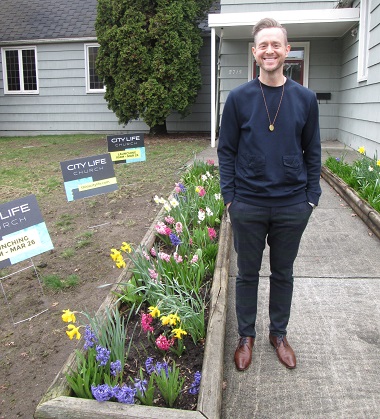 Pastor Todd Lueck and City Life Church Vancouver have moved into the former home of Westpointe Christian Church in Kitsilano.

Last week Church for Vancouver posted Frank Stirk’s story Christ City Church Kitsilano: Born of a unique partnership. This week he follows up with the story of another new church in Kitsilano. Both are adapted from his forthcoming book, Streams in the Negev: How God is Beginning to Transform Vancouver (Urban Loft Publishers).

One of the biggest challenges facing new church plants virtually anywhere in Vancouver is finding space to hold Sunday worship services. And yet it’s the testimony of many planters that God will provide for their needs – and sometimes more than that.

Take the case of City Life Church Vancouver in Kitsilano. It’s the recent story of how God turned a difficult situation around in a way that no one could have imagined.

The church is a plant of City Life Church in Chilliwack, a large, nondenominational congregation shepherded by lead pastor Lorne Lueck. City Life Vancouver’s pastors are Lueck’s son, Todd, and his wife, Stephanie.

About three years ago, says Todd Lueck, they “started to feel just an unrest” in their hearts. That led them to pray and seek the Lord’s will. In time they sensed that he was calling them to leave Chilliwack to plant a church. In February 2016, they took the plunge.

“God had also spoken to our church really strongly in that season and seasons past about planting churches, supporting church planters,” he says. “And so our leadership team felt really excited about that, although they were as shocked as my father.”

But while the Luecks were convinced that God was calling them to plant in Metro Vancouver, they did not know where. (At one point, they were checking out the Brentwood area of Burnaby.) Then, despite Vancouver’s close-to-nil rental vacancy rate, housing providentially became available in the Olympic Village on the southern shore of False Creek. They felt convinced as a result that this was where God wanted them to launch their church, especially since there is not a single church in the Village.

But they were wrong.

First they couldn’t find any space in Olympic Village to rent or lease. “It was very, very difficult to find a place where we could gather 100 percent of the time,” Lueck says. “There was just nothing in the Olympic Village that would accommodate that.”

So they began exploring other options just outside the Village. This time they succeeded – only to be told even before they were able to begin using the venue that their contract was about to be rescinded. And so City Life Vancouver met there for the first time January 22, knowing they would very soon need to secure another meeting place. 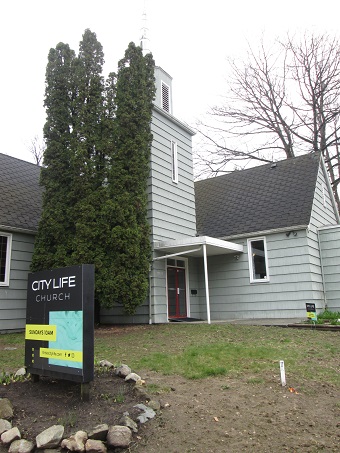 Anyone who drives along 10th/12th Avenue on the west side of Vancouver will have noticed this church building, just east of MacDonald.

At first the congregation wasn’t sure how to respond. Then just days later came an unexpected answer to their dilemma – in Kitsilano.

That building is at 2715 West 12th Avenue, just east of MacDonald Street. Until late 2015, it had been home to Westpointe Christian Church. (It has since relocated to Richmond and is called Compass Church.) Since March 26, it has been City Life Vancouver’s new – if only temporary – meeting place. Lueck says under their lease agreement, they have exclusive use of the building for less than they were paying to rent their previous location for just a few hours a week.

“I would rather be in a non-traditional space,” Lueck admits, “because I feel part of what we’re called to do is to help people rethink what the gospel is and how it impacts and affects culture. But there are so many pros to this. The location is prime, it’s accessible, and we’re very flexible with the amount of things we can do here. So we feel like God’s opened the door and we’re going to walk through it.”

Lueck also concedes they will need to be “sensitive” to the fact that God has led them to a well-established middle-class community that bears little resemblance to the Olympic Village with its brand new high-rises and mostly young families.

“At the same time,” he says, “we want to be a city-reaching church that isn’t limited to a specific neighbourhood, although certainly we’ll target Kitsilano. So the culture of what we do from day to day isn’t going to change, but how we do it will probably change.”