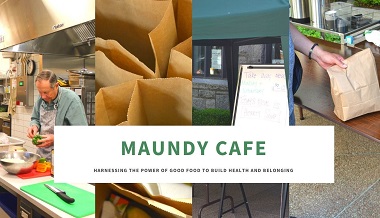 Alicia Ambrosio, Communications Director at Christ Church Cathedral, recently posted a comment which illustrates both creative inter-church cooperation and care for neighbours in the downtown core. It is re-posted here by permission.

The power of a subversive Creator

This blog was written by David Nacho, the director of Street Ministries at First Baptist Church, Vancouver. Beginning June 22 and running through the summer, First Baptist will be preparing and serving three Tuesday evening dinners at Christ Church Cathedral. The meals will take place the Tuesday before ‘welfare Wednesday’ – the day income assistance payments are issued. Dinner is served from 5 – 6 pm.

What does a church that’s been serving meals to the poor in the city for two decades have to learn about hospitality?

A lot! If we allow the Creator to subvert our ways of extending and receiving hospitality.

In the gospel of Luke, meals are extremely important to understanding Jesus. For example: Jesus joins a feast with a crowd of tax-collectors initiated by Levi (5:27-32); he eats with Martha and Mary (10:38-42); he often dines with Pharisees (11:37-54 and 14:1-24), etc. In these stories Jesus, the man without a home, appears as the supreme guest in need of hospitality.

Meals are the context of Jesus’ ministry, and they are also a powerful image of his teachings. In his parables, food is something that cannot be denied to a travelling guest (11:5-8); and the return of the prodigal son is celebrated with a great banquet of welcoming back to the family (15:23-24).

Jesus also uses meals to subvert (turn upside down) the hospitality expectations of his culture: “The next time you put on a dinner, don’t just invite your friends and family and rich neighbours, the kind of people who will return the favour. Invite some people who never get invited out, those who won’t be able to return the favour.” (14:12)

But Jesus doesn’t merely teach about subverting cultural norms. Let’s look at one story that takes place around a meal in order to understand how Jesus lives out his own teaching as he subverts the roles of host and guest in those meals. The resurrected Jesus encounters two discouraged disciples on the road to Emmaus (Luke 24:13-53).

Jesus begins by walking alongside the travelers. The supreme guest was used to meeting people on the streets, on the roads.

Jesus opens the conversation with a genuine question: What are you two talking about? What’s been going on in the city?

If we are honestly asking the question, we might not only get a report of the news, but we might also get to hear from the people out there about their fears and their hopes, broken as they are.

Telling stories matters at a small scale and at a large one. Stories shape us, just as they shaped Jesus. Latin American theologians often emphasize that God is the Lord of history. Jesus’ actions confirm this as he retells history in light of his story.

Jesus accepts the hospitality the disciples offer him and sits at their table.

Finally, Jesus breaks bread. It is this action that finally opens the eyes of the disciples, as they become the guests at the table.

I love this story because the characters in it show us that hearing and living out the Gospel is not only an intellectual experience. It involves the body in motion, acknowledging emotions, telling stories, extending hospitality and breaking bread. Salvation tastes like a lovingly prepared meal; salvation feels like when we are gathered with family, friends and sojourners, and relationships flourish.

The story of the Road to Emmaus shows how Jesus turns hospitality upside down. As one Latino theologian, Eric Barreto, explains: It is the two disciples who invite Jesus – someone they found on the road – to join them for a meal; they are the hosts. And yet Jesus, who starts as the guest, takes over the duties of the host immediately. By breaking the bread, Jesus blurs the very lines between host and guest.

This cooperative venture comes as First Baptist has been disrupted not only by the pandemic, but also by the fact that it has been forced to work around major renovations to its building. Another local fellowship – Coastal Church – is allowing First to hold services in its building.

For some more background on both the Maundy Café and some ways in which it has both benefited from, and helped out, other food programs, see: