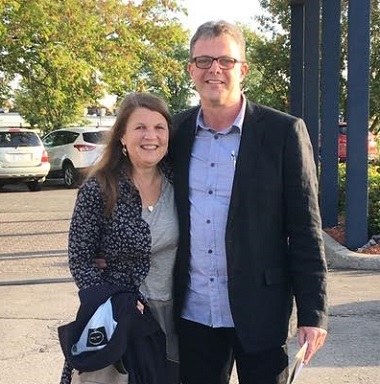 Kevin and Julia Garratt invested 30 years of their lives in China before they were arrested in 2014. They are now back together in Canada.

Kevin and Julia Garratt were interviewed by Anna Maria Tremonti on CBC Radio’s The Current December 8 about their imprisonment in China. The Garratts have strong ties to the Vancouver area, and expect to move back here next year. Following are portions of the moving and revealing 45-minute interview.

ANNA MARIA TREMONTI: You may remember hearing the story on the news in August of 2014. Two Canadians who owned a coffee shop in China near the North Korean border were suddenly arrested, accused of being spies. It would be the start of a two-year ordeal for Kevin and Julia Garratt.

And in the process, they would lose three decades of life and work in China. And then, this past September, we learned Julia was back and Kevin Garratt was also getting out of prison and returning to Canada. Julia and Kevin Garrett are now ready to talk about what happened to them. And they’re with me in our Toronto studio. Hello.

AMT: I want to say welcome home, but China has been as much a home to you as Canada.

KEVIN GARRATT: Yes it has been. We went there first in 1984 and stayed for 30 years.

AMT: Why did you first go to China, Julia?

JULIA GARRATT: Because we just graduated from University of Toronto, we were looking for what our next step would be. We were young, we’d heard all kinds of things about China and then we met my professor at university and another friend of a friend who had just returned from China. And we got really interested in the opportunity; they were looking for English teachers. And so we got an invitation and went there. . .

The Garratts were very amazed by the hospitality of the Chinese people, and lived in seven cities before moving to Dandong on the border with North Korea.

AMT: And so a one or two years turned into 30. And along the way you raised a family, you’ve got, like, four kids.

KEVIN GARRATT: Yes. Well, three of our children are Canadian, natural, and we adopted one young girl from China from an orphanage we were working in at the time.

AMT: Okay and your kids were there with you growing up then over this whole time. So when did you move to Dandong, where in that process did you move?

KEVIN GARRATT: We moved to Dandong in 2007. We had known about North Korea, we had talked to, you know, to people about North Korea. I really felt well, we’ve done a lot of things in China at that point and we thought well, maybe we can do something with North Korea.

There’s a tremendous need there we heard. Both, not just for English teaching, but just aid and help. So we decided we’ll move to Dandong and see what we can do because it’s right on the border with China and North Korea. . . .

The Garratts opened up a coffee shop in Dandong, which they said was frequented by Chinese and Koreans, but also by people from lots of other countries because it was really the only Western restaurant there at the time.

Apart from the business, they pointed out, they also ran a small NGO to carry out small aid projects into North Korea. They said they always went through all the proper channels in dealing with North Korea.

Tremonti asked the Garratts about whether their presence in China was related to their faith.

AMT: Were you working with any religious groups or was it a secular project?

KEVIN GARRATT: Well, we came out of a church in Vancouver and that’s the church we’ve belonged to for the last 10 or more years. And so they helped to fund that. People would donate to the NGO, which is separate actually from the church. And then those funds we would use then for development or aid work into North Korea.

AMT: And did anyone have a problem with that? With you using that, you know, sometimes they’re touchy on both sides of that border about Christianity. Did you find that was an issue?

KEVIN GARRATT: We didn’t, you know, say we’re Christians; we want to help you. But they did actually ask us are you Christians? We said yes. We’re not trying to hide it, we’re also not waving a flag.

AMT: So what do you think put you on the radar then. Like, you’re in Dandong since 2007. When do you think, in retrospect, they had you on some kind of radar?

KEVIN GARRATT: Well, I think there’s a number of things. During the investigation, which was actually quite brutal, they told me, we’ve been watching you since you arrived. So that’s fairly normal, they actually watch everyone who comes into China more than a few times. So we’ve been here 30 years, so obviously they’re going to watch us.

We lived in a sensitive area, the border with China; North Korea is sensitive to them. We had a lot of people who came to the coffee shop who were to China very sensitive. People from embassies, reporters, things like that, you know; to us they’re just customers and we just talked to them. We really didn’t give it a second thought. . . .

The actual arrest took place just after they had gone out for a meal with acquaintances. The Garratts spoke at some length about the challenges of being imprisoned in China. They were, at times, terrified, depressed and confused, and constantly suffered from a lack or privacy – but they did have some positive interactions with guards and particularly with other prisoners.
They both took solace in the Bibles that Kevin managed to insist on.

AMT: How did you cope through all of that [constant interrogations]?

KEVIN GARRATT: It was difficult. I mean, like Julia I cried, I was upset. I mean, I was shaking, I was terrified. My comfort was my Bible and prayer. I would sing, you know, and they didn’t really like that. They told Julia to do it quietly I found out later; they didn’t say too much to me because I wasn’t really singing loud. But those kinds of things, Prayer and reading the Bible was my comfort. . . .

Julia and Kevin were each held in solitary confinement for six months, then Julia was released under house arrest, while Kevin was sent to prison. He went to trial in April of this year, and was convicted of espionage (as far as he can tell; he reiterated that they had undertaken no such activity) and sentenced to eight years in prison September 13. 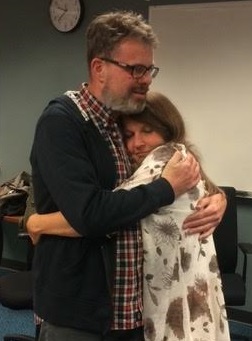 Kevin and Julia Garratt at the Vancouver airport September 15, right after he was released from prison.

He was fined $20,000 and the amount of his medical expenses during his 19 months in prison.The Garratts’ business was seized, along with their savings. However, he was then deported, flying home September 15.
Despite everything, the Garratts would consider going back.

AMT: You still seem to have so much respect and love for the Chinese people. Do you see yourself ever going back?

KEVIN GARRATT: We’d like to at some point. I was told I can’t go back for five years. You know, after that has run out, they said we can go back. They said Julia could go back anytime because there’s no charge against her. . . .

To listen to the whole interview go here and for the transcript go here. The Garratts also spoke at length to the Globe and Mail: Garratts recount dark odyssey through China’s security apparatus.

Kevin Garratt says they are connected with Five Stones Church in New Westminster. They plan to be back in the Vancouver area in February, sharing at a couple of services, and then hope to move to the West coast in the spring or summer.