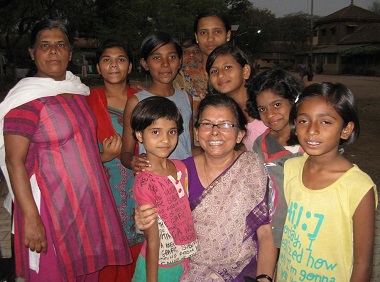 Lorraine Francis (front, centre) has been inspired by the work of pioneering Indian social justice reformer Pandita Ramabai; she will be a keynote speaker at Missions Fest.

Lorraine Francis of the Mukti Mission in India will be a featured speaker at Missions Fest Vancouver (January 27 – 29). Here she describes Pandita Ramabai, the renowned Indian reformer, and tells some of her own story.

Born in 1858, Pandita Ramabai, the founder of Mukti Mission, was a gifted woman from a Brahmin family. Contrary to all Indian customs at the time, Ramabai’s father taught his wife to read the sacred language of Sanskrit while Ramabai was in her womb.

Ramabai quickly picked up all the sacred scriptures (slokas) as she was highly intelligent. At just eight years old, she could recite 18,000 slokas. However, tragedy struck the family, and Ramabai lost both parents and an older sister to starvation during the famine of 1876-1877. She was left in care of her only brother, Srinivas. The two siblings in their desperate condition continued their search for spiritual enlightenment and eternal peace. Ramabai would lose her brother in 1880.

Left to herself, Ramabai was married to a Bengali lawyer when she was 22. After 19 months, he died of cholera, leaving her alone with a young daughter. In her desire to find peace for her soul, Ramabai underwent long and arduous pilgrimages.

It was through the Wantage Sisters (Church of England) that she was converted and received baptism in 1883 while on a trip to England. Ramabai was so amazed to experience the care, dignity and acceptance given to women overseas that her heart was filled with compassion for her Indian sisters.

In those days, throughout India, widowhood was regarded as a punishment for sins committed by women in their past lives. Hence, countless young widows (even child widows as young as nine years old) were forcibly placed onto the funeral flames of their dead husbands to fulfil their duty as wives. Those who escaped became prostitutes for they thought it was better to have such a life than be tortured by their husbands’ families as a widow. 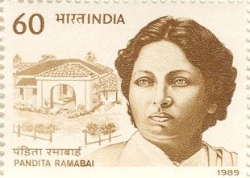 On her return to India from England, Ramabai was conferred the title ‘Pandita’  by the government, the  highest title possible for an Indian woman.

The renowned Pandita Ramabai Mukti Mission, having its headquarters at Kedgaon, was founded by Pandita Ramabai in 1889 and is still serving India’s women and children today. The main mandate of Ramabai’s work was to rebuild, restore and renew lives and places that have been devastated for generations, and that work still continues. (Isaiah 61:4).

This mission has been instrumental in saving hundreds of women, girls and child widows from what many have found to be a life worse than death.

Lovingly known as ‘Mukti,’ we have 18 branches spread over eight states of India, mainly in tribal places where people are living in wretched conditions. Money lenders swindle them of their dignity and take their minority-aged children as bonded slaves. In such situations, Mukti has been reaching out to needy, under-privileged children and their families by educating and empowering them to go out and be salt and light in the community. 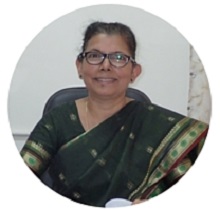 Coming from a non-Christian background, as a young woman, I was running from pillar to post for peace and tranquillity. One evening, in the quietness of my room, I sensed an invitation from the Lord Jesus welcoming me into his arms.

A small gospel tract spelling out John 14:6 – ”I am the Way, the Truth and the Life . . .“ was given to me by a colleague at work. When my family heard about my conversion, they were not happy about it. My older sibling arranged with my parents to harass me to the extent of putting me out of home.

However, the God of Justice who brought light into my dark world says in Isaiah 49:15 –“I will never leave you nor forsake you!” A caring family from church welcomed me into their home and to cut the long story short, in a year’s time, I was engaged and married to the young man who had given me the gospel and led me to the saving knowledge of Jesus Christ.

My journey of faith began; the Lord wanted to use me as an instrument to bring justice to the abandoned and those who were stigmatized for no fault of their own.

In 1988, when our first daughter, Abigail, was 16 months old, Anil and I joined Mukti Mission as missionaries. We were young, fresh to the mission field, and we wanted to immediately start a new revolution at Mukti, turning it upside down. However, God raised mentors for us who tenderly counselled us and led us into what we call “contextualization.”

While at Mukti, we were soon blessed with another daughter, Amanda. After 14 years of service at Mukti, we were given a sabbatical of two years to study at All Nations Christian College, England, where we successfully completed the Diploma in Biblical and Inter-cultural Studies.

Our two years in England were refreshing and rejuvenating but we were longing to come back to our own people and serve them with greater enthusiasm and zeal. What a welcome we received after our two years’ stay overseas.

By this time, I had grown in my Christian experience and my heart yearned more and more to counsel the girls and give them a hope and a future. Anil’s background being finance and administration was a great support; his fatherly persona and dry sense of humour meant volumes for the children and teenagers.

In April 2010, I was given the role of director and Anil, chief of operations. We continue to carry these roles today and it is our constant prayer that the Lord must give us hearts that are willing to serve him in any capacity – whether it is to clean the tables, feed the children or wash one another’s feet. 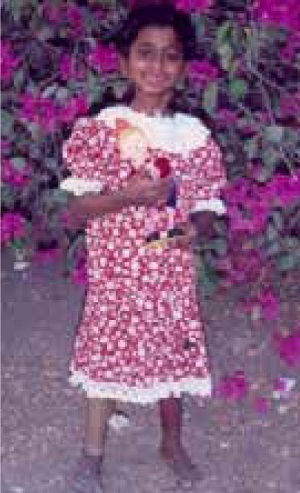 To end my article, my heart resonates with Mukta, a poor shepherd’s daughter who was brought like a little lamb by her father on his shoulders.

When Mukta was five years old, her left leg had to be amputated because it had turned gangrenous after a sharp bone got into the sole of her foot and became severely infected. Due to lack of medical facilities, this injury was ignored until one day the doctor told her father her leg needed to be amputated if her life was to be saved.

As if this wasn’t enough, due to an incorrect tetanus injection, Mukta suffered from a severely dislocated jaw which impacted her looks. She could not go to school like other children in the neighbourhood. One day, a Good Samaritan who happened to know about the great work Mukti was undertaking for children and women, introduced the mission to Mukta’s father.

Very shortly after Mukta become a member of the Mukti family she was blessed with an artificial leg which fit her very well and looked almost like her natural leg. She could go to school, play in the garden and run and jump, just like any other child her age. 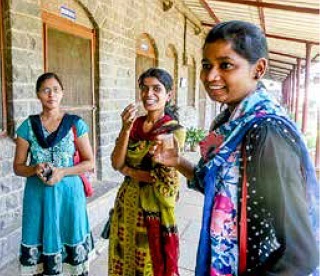 One day during Vacation Bible School, Mukta surrendered her heart to Jesus and received him as her personal Saviour and Lord. She excelled in her studies and soon reached high school and went on to university. Mukta always believed that the Lord Jesus in whom she had placed her trust would never leave nor forsake her.

Mukti was able to arrange a couple of facial reconstructive surgeries for Mukta, who is now a beautiful and confident young woman. Mukta has completed her Masters in Social Work and is serving on staff at Mukti. Grateful for what Mukti has done in her life, she readily shares the wonderful story of how Mukti helps rebuild, restore and renew lives, creating beauty from ashes!

Mukti’s vision: Christ-centred homes where destitute women and children irrespective of their background are accepted, cared for, transformed and empowered to be salt and light in the society.

Mission statement: We seek in the Spirit of Christ, to sow seeds of change in the lives of every individual under the care of Mukti Mission, skillfully counselling them to deal with issues of life, initiating varied opportunities of healing and shaping them prayerfully as models of God’s kingdom for society at large.

← Garratts glad to be free – but would still love to be in China
Imago Mundi: Loren Wilkinson’s care for creation, expressed in verse →