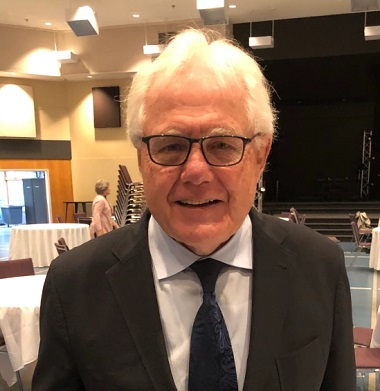 Last week Statistics Canada released a report which points to a decline of the Christian faith in Canada. Europe has gone before us and the United States appears to be following.

This week, though, Brian Stiller put the situation in perspective, pointing out that the church has grown dramatically in many parts of the world over the past 100 years.

As Global Ambassador for the World Evangelical Alliance (WEA) since 2011, he has travelled the world, sharing his insights in person, in books and on blogs as he goes.

He spoke to some 300 people at the White Rock-South Surrey Leadership Prayer Breakfast October 28, then as part of South Abbotsford Church’s 90th anniversary series on Sunday.

His main purpose at each event, it seemed, was to lift the gaze of the assembly beyond their immediate concerns and community.

In Surrey, he addressed ‘Leadership in Turbulent Times,’ basing his message on the unexpectedly bountiful feast that resulted from a small boy’s gift of loaves and fishes.

in Abbotsford, he said, “So when I look to the church – and as I travel through Africa, Asia, Latin America, wherever – I know that this morning, today, in your 90th anniversary, you are part and I am part with you, of this enormous tradition of faith and worship through 2,000 years.” 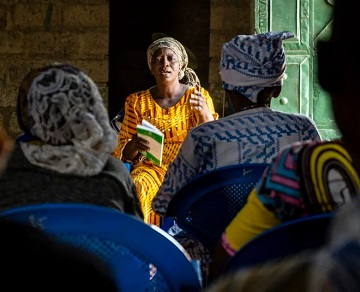 Living in Canada, we tend to believe what the papers say – which are accurate by the way – that faith is diminishing in our country, at least as defined by church attendance, or what people affirm or don’t affirm . . .

The way in which our general culture dismisses or ignores who we are as a follower of Jesus – it just doesn’t count as much as it used to – sometimes disparaged, but most often dismissed.

You and I can come to a collective assumption that this is true worldwide.

He then pointed out that this is far from the case:

In 1960 there were 90 million evangelicals in the world. In 62 years that 90 million has grown to 650 million. In no period of history with any religious group has there been that rapid growth.

Stiller looked at various parts of the world and the larger body of Christians:

As World Ambassador for the WEA, Stiller spent time explaining the organization’s role and the state of evangelicalism generally.

He said the 2.4 billion Christians in the world are represented by three main bodies:

The WEA was born 175 years ago in England, with European and North American representation. Now 143 countries have national alliances. “In Canada it’s the Evangelical Fellowship of Canada,” which Stiller led from 1983 – 1997.

So this global body – we have offices in New York (UN), Bonn and Geneva, on human rights and persecution and on sustainable issues of climate change and so forth. We have a number of departments that are involved in various aspects globally. 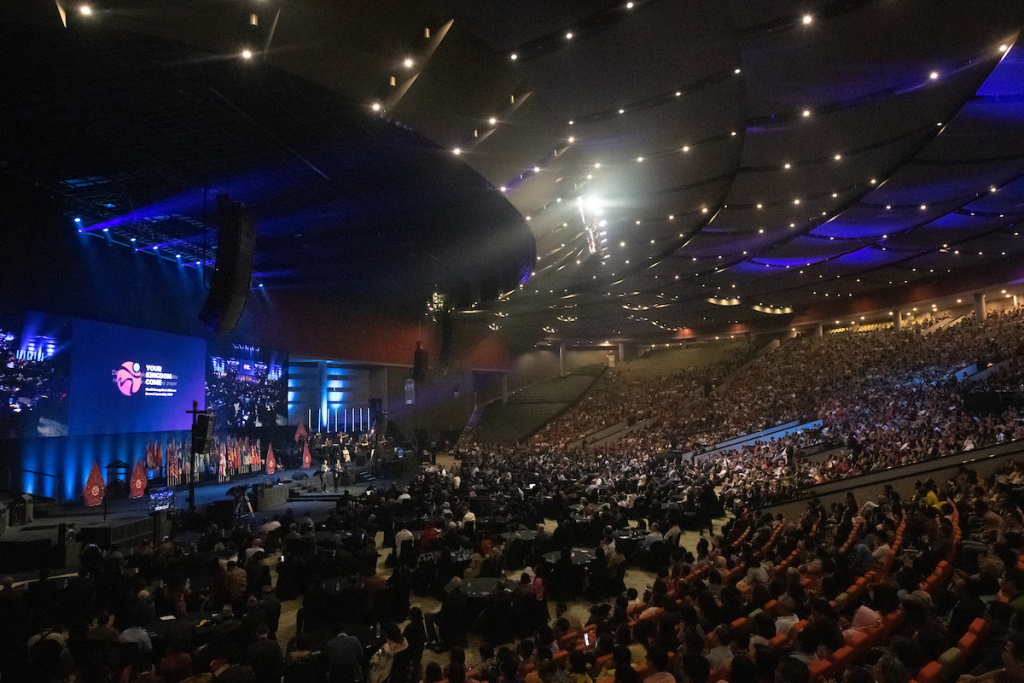 Participants from 92 countries were joined by several thousand Indonesians for the opening ceremony of WEA’s 2019 General Assembly in Jakarta. Photo Timothy Goropevsec (WEA).

In a telephone conversation, Stiller told me the WEA “is as strong as it’s ever been” since he joined in 1984, and added that with the current focus on strong leadership, funding and governance things should improve still further.

Stiller and the Evangelical Fellowship of Canada played a significant role in helping to revive the WEA, hosting it for a time, helping to fund it and overseeing funds. Geoff Tunnicliffe, who lives in Metro Vancouver, took over leadership of the WEA in 2004.

Being in Abbotsford reminded Stiller that the city hosted WEA’s General Assembly in 1977. They had delegates stay with local families in order to control costs – “and there’s nothing like Mennonite buffet dinner.”

After describing the dramatic growth of the church in the Global South and the renewed vigour of the WEA, Stiller asked “Why? In an age where we assume that the message of Christ is less and less accepted, especially in our Western world, what has happened?”

He suggested “three ‘drivers’ that have caused this acceleration of faith”:

He added “two ‘shapers’ that are remolding the church and its engagement”:

Go to the YouTube video of Stiller’s talk to hear how he fleshes these points out.

In the public square

The WEA has become involved in a wide range of issues in the public square. Here are several current, or very recent examples

Thomas Schirrmacher, Secretary General of the WEA, is joining Pope Francis and many other prominent religious leaders as speakers at the R20 (Religious Forum) in Bali, Indonesia November 2 – 3.

The R20 has been recognized, for the first time this year, as an official G20 engagement group, with the purpose of adding major religions as ‘part of solution’ to tackle global crises.

The R20 was initiated by Indonesia’s 120-million member Nahdlatul Ulama, which has been working with the WEA for the past several years. A November 5, 2021 article on the WEA site is titled, “‘We are working together for the right to convert each other’: Charting a New Direction of Muslim-Christian relations.”

Janet Epp Buckingham, Director of Global Advocacy for the WEA and Executive Editor of the journal for the WEA-connected International Institute for Religious Freedom (IIRF) – which now has a branch in Vancouver – is attending the R20. (I have written about her here and here.)

Representatives of the WEA will be fully involved at COP 27, the UN Climate Change Conference at Sharm El Sheik, Egypt, November 6 – 18, both on their own and as part of the Christian Climate Observers Program.

Go here for a report on the WEA’s involvement with COP 16 last year in Glasgow.

The WEA now has an office in Geneva, Switzerland and is involved with various aspects of the United Nations. For example:

In June, Wissam al-Saliby, Geneva Officer Director for the WEA, was elected as the new vice-president of the United Nations NGO Committee on Freedom of Religion or Belief (FoRB). The committee aims to promote the right to freedom of thought, conscience, religion or belief, and ensure these fundamental freedoms are upheld according to international standards at the UN.

The WEA also cooperates with Roman Catholic organizations and the World Council of Churches on various fronts. Go here for more information on the WEA’s Global Advocacy.

The value of ‘evangelical’ 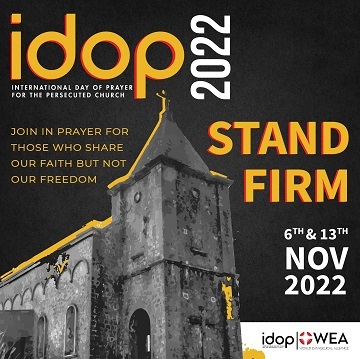 The WEA strongly supports the International Day of Prayer for the Persecuted Church.

Brian Stiller acknowledged the challenges of reengagement in the public square during his South Abbotsford talk:

You and I know that today within this North American world . . . there is a division given the political divide. Sometimes the word ‘evangelical’ is used for political purposes, and that creates all kinds of problems. But nevertheless, the desire to engage as a follower of Jesus, as salt and light – sometimes we trip over that and take it too far. We push too much salt on the food for other people and we become repugnant.

But he is convinced that we should not back away from the word ‘evangelical.’ In our phone conversation, he said that despite the “egregious” abuse of the term in the United States and some other nations, there are important reasons to retain it.

“I ask the question – when Catholic priests fail to live up to expectations, do you change the name Catholic?” Evangelicals represent one quarter of the world’s Christian population, he said, and they have sustained a particular biblical worldview over hundreds of years. “We can’t let the weakest define our strength.”

Referring back to the tremendous growth of the evangelical community around the world, he said:

The name is so critical to evangelicals in other countries. Their identity in the world body, even though they are a small number in their own country, matters.

He recalled an evangelical church on the upper Nile being attacked because the Muslim majority thought of it as a cult because they were not Orthodox or Catholic. “They were able to show membership in a global organization, and that changed everything.”

He described a similar situation to the congregation at South Abbotsford, where his friendship with the imam of what might be the largest mosque in the world has protected local Christians:

When I go to Lahore I spend time with him. I bring in my evangelical community and we sit and talk about the issues, of blasphemy laws and the killings of Christians in Pakistan, and what we can do together. All of a sudden, they find within that Pakistan world, being an evangelical and part of this larger body that builds relationship with an imam, it can change what’s going on on the ground.

Stiller was initially drawn to the WEA because of his desire to protect persecuted Christians. He says they strongly support the International Day of Prayer for the Persecuted Church (IDOP), which is taking place this Sunday (November 6) in Canada. 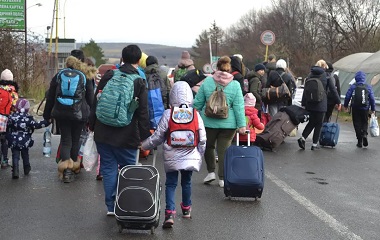 At both the Surrey prayer breakfast and South Abbotsford Church, it was not hard to discern Stiller’s Pentecostal roots. (He recalled his early days with the Pentecostal Church in Saskatoon: “We were the holy rollers; I went to a church called the Jesus Saves Corner . . .)

Though he presented facts and figures, his main theme was that local Christians are part of the worldwide church – and that we mustn’t hesitate to step out in faith.

He referred several times, both in Surrey and in Abbotsford, to his work in Ukraine, which he will soon visit for the fourth time this year.

He posted a story about Ukraine on the WEA site October 27:

Just yesterday I got a note from a Ukraine family I had met in the Holy Trinity Baptist Church in Bucharest, Romania. They told me they wanted to come to Canada, so I gave them my card and suggested they contact me if they needed help. They did, so I contacted an MP on the government side and his staff helped maneuver the visa issue.

Then they told me that they had a plane to Montreal, so I connected with a church there, who met the family, cared for them, then got them off to Ottawa where a friend would help them locate. The note was a thank you: now located, the daughter in school and both mom and dad working, this was a good news note on Canadian Thanksgiving Day.

Stiller concluded his Surrey address with these words:

How do we lead in turbulent times? To go back to Ukraine, I wouldn’t offer a suggestion as to how you solve that war. Who am I to offer a suggestion telling people how to solve it? But what I can do – I can take what is simply mine, along with others, and through the mighty presence of Christ, when you give it away, it turns from the addition table to the multiplier table, and it becomes something way beyond what you and I ever anticipated.

Go here for some earlier articles about the WEA, including Canada’s involvement with it.

← Around Town: Craig Greenfield, Gordon Fee, Hummingbird, Identity Crisis . . .
Eating disorders: ‘a parasite, a monster, a demon and a terrorist’ →