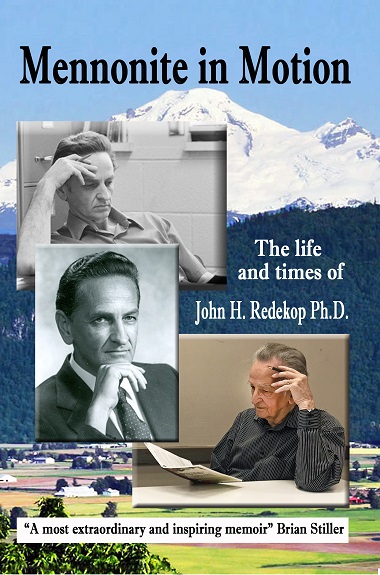 John Redekop has written quite a few books as well as several hundred articles and learned papers. He has delivered several thousand university lectures and sermons.

Dozens of faith-based, academic and social service organizations have benefitted from his thoughtful and vigorous leadership skills.

And now, as he enters his tenth decade, he has provided almost 400 pages of personal insights into the motivations, permutations and combinations that have shaped his remarkable life.

I found Mennonite in Motion to be a page-turner. It is appropriate – although hardly predictable – that Dr. Redekop completed this work during the early days of Russia’s invasion of Ukraine.

After all, his parents came to Canada in 1913 from a Mennonite colony in the Ukrainian steppes of Russia. If that colony still existed, it would be part of the focal point of that considerable tension.

I am grateful for the opportunity to write about this book and its author. His parents and my wife’s fled the land their forebears had first settled in the late 1700s. They had gone there from other parts of Europe at the invitation of Catherine the Great.

I first started learning about Mennonites in the late 1960s, when I began my journalism career in Chilliwack. And I married Edna, who has impeccable Mennonite roots.

My interface with John Redekop came a few decades later. He talks about it thusly:

I must note a truly unusual happening. In its April, 2007 issue, BC Christian News carried this headline: “Two political experts tackle each other’s work” On page 16, Lloyd Mackey reviewed my book, Politics Under God, and I reviewed his book, The Pilgrimage of Stephen Harper.

I am not aware of any other instance in which two authors reviewed each other’s books, let alone on the same page in a magazine. Lloyd and I are friends and for me it was a delight and privilege to share this page with him. (Page 274).

I will add that the delight was mutual and there is one further fact worth noting. BC Christian News, capably edited for a couple of decades by Flyn Ritchie, took the top award in the newspaper editorial category that year in the Canadian Christian Writing Awards. The basis for the award was the Redekop / Mackey review combo.

John writes and speaks quietly. But he does so with clarity, energy and warmth. Further, he is most orderly and well-organized. His lectures, books and articles have all the hallmarks of one who intentionally outlines and exposits his work so there can be no mistaking of the points he is making. And he carries on that approach in his memoir.

There is adventure and stability in what he writes. His account of a 1954 motorcycle trip through Switzerland, Italy, North Africa, across the Sahara and into several Middle East countries is an example of the former. Sand storms in North Africa were among the physical dangers.

But a 1986 trip to Moscow, when he was part of a team of evangelical leaders speaking for religious freedom in the USSR, could have been dicey in other ways. The trip took place at the time when Mikhail Gorbachev was on his rise to power in the USSR, but well before his Glasnost (openness) policy helped to trigger the breakup of the Soviet empire in 1991.

The evangelicals met behind the walls of the Kremlin, with the Commissar for Religious Affairs and other top Communist officials. Pages 244 – 251 chronicle the trip, including John’s answer to the Commissar’s question: “What do you want?”

John and his fellow presenters had four points that he laid out in his usual well-organized fashion. He said the Council of Evangelical Christians / Baptists wanted:

The group had no way of knowing if the Commissar would accede to the requests. But (spoiler alert) all four changes were allowed within a few months, as the process of Glasnost gathered steam.

The most extensive chapters describe his years of teaching and raising his family with his wife, Doris, in Waterloo. There, for many years, he was chair of the political science department at Wilfrid Laurier University (WLU).

He went there when it was still Waterloo Lutheran University. That gave him a ringside seat when fellow Mennonite, Frank C. Peters, as WLU president, navigated the school through its transition from a private faith-based institution to a full public university. I wish he had written more about that in his memoir. It is a remarkable account of Anabaptist conflict-resolving principles in action.

John went to WLU on a one-year trial basis, but stayed for two-and-a-half decades. He and Doris retired to Abbotsford where, among other things, he served a term on the city council.

His faith-based input proved useful, as Christian and Sikh groups in the community worked to resolve conflicts over the desire of the Sikhs to build a gurdwara. The project was cleared for construction and today graces a block of South Fraser Way between Abbotsford and Clearbrook town centres.

But city council activity was just one facet of John’s ‘retirement’ activity.

He taught political science at Trinity Western University in various capacities from 1995 to 2016 – sometimes serving in place of a political science prof on sabbatical. One stint involved teaching American government. The TWU work capped 61 years since he had commenced university level teaching.

And he initiated two ‘church book’ projects, pulling together writing teams to tell the stories of Christian churches and ministries in their respective locations.

The first, Being the Church in Abbotsford, was published in 2013. The second, The Church in Surrey & White Rock: The Untold Story, came out in 2018. The Surrey project won a Canadian Christian Writers award in its category.

(Full disclosure: John got me involved in the Surrey ‘church book’ as one of a dozen editors and writers. I learned much from him, in the organizing of the book’s writing and publication. And I was able to play a role in seeing that both faith-based and community leaders became aware of the book. Its stories told of Christian involvement in Surrey and White Rock, in the fields of community service, poverty alleviation, seniors, refugees/immigrants, education, health care, business, the arts and governance.)

By the grace of God 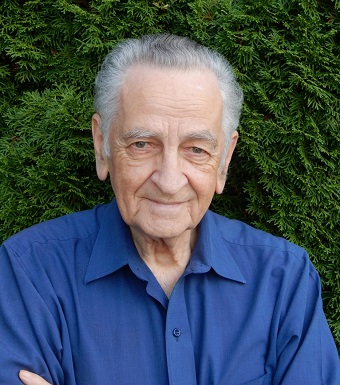 John Redekop feels he has been blessed by God.

Rather than recount too much of what he has to say, I will wrap with a quote that illustrates both the mind and heart of John H. Redekop, and his very well-organized way of communicating.

Up to a point, my autobiography can be summarized in one long sentence. I am a Canadian by citizenship; a Mennonite by birth, an Anabaptist Christian by choice and conviction; a professor by vocation; a fortunate husband by marital status; a privileged retiree by divine providence; and a happy and very grateful resident in a prosperous and free country by circumstance – all by the grace of God.

My purpose in writing this life story is three-fold: to describe as accurately as possible significant experiences of my life; to transmit values and whatever understanding my life has brought me; and to express gratitude.

Finally, I express my most sincere and deep gratitude to God for accepting me as a flawed and sometimes failing person who was, nevertheless, accepted by salvation into Christian sonship. I have sometimes failed my Lord; He has never failed me. My hope and prayer is that in these sunset years, I might continue to be guided by my motto, To serve God and Others, and by my desire to end well. (page 14)

Whatever else John says in Mennonite in Motion, it flows back to these opening statements – his “long sentence,” his purpose and his gratitude to God. And there are many great photos, too!

The book is presently available at Regent College Bookstore, TWU Bookstore, House of James and Mennonite Heritage Museum in Abbotsford and Coles in Chilliwack. It will also be available on Amazon and at other locations in the near future.

Lloyd and Edna Mackey are enjoying an active retirement in the West Village of City Centre, where they observe the high rises popping up like mushrooms. Lloyd has an MBA from Simon Fraser University (1984) and a DMin is from Tyndale University in Toronto (2015).

He is an Honorary Member of the Canadian Parliamentary Press Gallery and offers chaplaincy support at the Simon Fraser University Multifaith Centre in Surrey.

1 comment for “John Redekop is a scholar, but also a practical man of action”