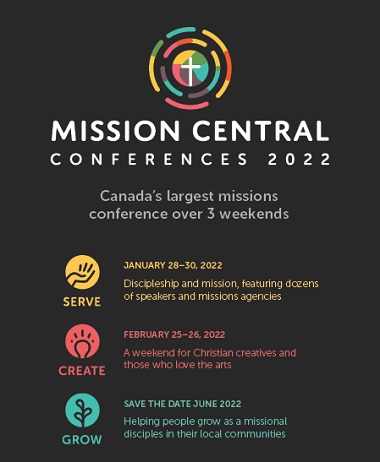 In our writings, conversations, seminars and conferences, we raise the centrality of Christ and his kingdom in the life of every believer, and the importance of forming every disciple in Christ’s image, with his mission.

God has graciously positioned us to act as a networking hub. We gather churches, agencies and people from diverse backgrounds with the common goal of participating in Jesus’ mission.

A few things have changed since Missions Fest Vancouver was launched in January 1984, particularly in the Canadian landscape.

Excitingly, over the years, the nations have become Canadians. This has given us an unprecedented opportunity to deepen the Gospel’s impact among diaspora communities and for our churches to be refreshed with new zeal.

Sadly, a negative change has also occurred over the same period. From the early 80s until now, Canada has become much more secular. There has been a dramatic reduction of people who are practicing Christians.

According to a poll called God and Society in North America, in 1996, 12 percent of Canadians were evangelical affiliates. A 2015 poll found 9 percent. Today that seems to have dropped to 6 percent. This raises an important question, “Why has there been a decline in evangelicalism?”

Therefore go and make disciples of all nations, baptizing them in the name of the Father and of the Son and of the Holy Spirit, and teaching them to obey everything I have commanded you. And surely I am with you always, to the very end of the age.

Forming new disciples requires communities, and individuals in those communities, who are being formed into the likeness of Christ. The church is supposed to be identifiable because of the way that the people of God reflect the love and character of Christ, proclaim the coming of the kingdom and resist the powers of darkness at work in the world.

We are not to retreat to our ghetto. We are called to be salt and light. Somewhere, collectively, we have lost the thread.

As part of Mission Central’s strategy to proclaim the kingdom and reintegrate discipleship and mission, we are introducing three new conferences:

SERVE:  This conference resembles Missions Fest Vancouver, where we raise the importance of missions, including a focus on sharing the Gospel, issues of justice, peace and reconciliation, both here at home and around the world.

SERVE (January 28 – 30) will be online this year (mostly), hosted on the Accelevents Virtual Conference platform, which will enable us to have multiple events happening concurrently – and includes social interactivity between attendees to simulate a real conference experience. The Youth Rally and Children’s Program will be in-person.

CREATE:  Art influences culture and should be a concern for those who love Christ’s mission. CREATE is a conference for Christian creatives and those who love the arts.

We want to see Christian artists infused with fresh passion and joy as children of God. As their communal and personal discipleship deepens, we know that their art will express the truth, beauty and goodness of a loving God to a dying world, transcending the pigeon-hole of ‘Christian art.’

GROW:  Discipleship is central to the advancement of the kingdom and the growth of the church. GROW focuses on young adults. We help connect you with a community where you can grow as a mature missional disciple. We dream of cohorts of mini-Jesuses bringing the love and reconciliation of Christ into every sphere of society.

GROW is coming in June.