David Vegt’s ‘My Neighbour Stephen Gorby as the Thief’ is part of the Via Crucis show at Lookout Gallery.

Thursday (April 3) will be a good day for those who appreciate art. Out at Regent College’s Lookout Gallery, an opening reception for Via Crucis: The Way of the Cross will introduce the work of five local artists.

Dan Law, David Vegt, Matthia Langone, Laura Rosengren and Alec Arnold depict the various stations of the cross. The show runs until May 9 if you can’t make the opening.

On the other hand, L’Arche’s Art of Being Together will be over in one evening. With institutional support from the likes of Vancity and CTV, this normally low-key enterprise (which supports people with developmental disabilities) will celebrate art and creativity very publicly at the Nikkei Centre in Burnaby Thursday evening. 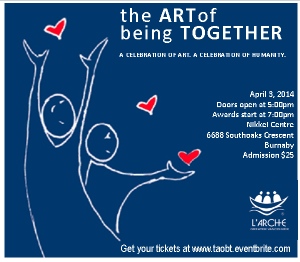 “The Art of Being Together is a unique, signature event that brings together people with developmental disabilities, artists, respected art judges, sponsors, friends of L’Arche and the general public, all in support of L’Arche and in celebration of ‘togetherness.’ It is L’Arche Greater Vancouver’s major fundraiser and an opportunity to bring L’Arche’s mission to the larger community.

“Guests will have the opportunity to browse through art pieces done by local artists as well as pieces completed by teams at L’Arche. There will be the opportunity for guests to vote on their favourite piece at the event and a ‘People’s Choice’ will be awarded at the end of the evening.

L’Arche Greater Vancouver – part of a movement founded by Jean Vanier – “is an intentional community of approximately 120 people sharing life and work together. We have six homes and two-day programs and are involved in initiatives of welcome and outreach to the wider community.” 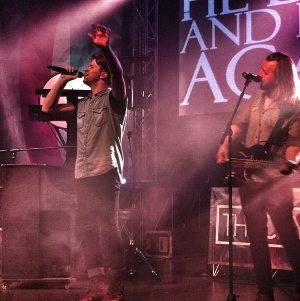 Not too many Christian rock bands come to town these days, so the appearance of The City Harmonic at Coquitlam Alliance Church this Thursday (April 3) should draw a good crowd. They won a Juno Award last year for Christian/Contemporary Gospel Album of the Year and were nominated again this year (losing out to Abbotsford’s Tim Neufeld).

Their ‘Heart Tour’ – named after their latest album – marks the band’s first Canada-wide worship tour; Coquitlam Alliance is the last stop. The band was formed four years ago by four worship leaders in four churches in Hamilton.

Ryan McAllister will open for The City Harmonic. The talented local musician had a serious taste of worldly success when his band Dakona signed with Madonna’s Maverick Records for $2.2 million, but then lost their deal when the company collapsed. After dealing with the disappointment, and even disillusionment, Ryan returned to making and producing music full-time, from the Fraser Valley farm he grew up on. He has a gospel album due out this spring.

Games start this Friday (April 4) in the BC Christian Soccer League. Hundreds of men and women from 42 Metro Vancouver churches will play until the finals in early July. Three divisions mean there is room for a wide range of skills.

Here’s a great opportunity to nominate someone you know for a Vancouver Award of Excellence. Here’s part of Mayor Gregor Robertson’s invitation:

“Anyone who lives here in Vancouver knows that it is our people who make this city great. Leaders with a commitment to innovation, sustainability and giving back to our community help make life better for all of us, and the City of Vancouver needs your help to recognize their excellent work.

“Anyone can nominate an organization, business or individual (adults, youths 18 years or younger, and children). You should make a nomination!

“The Awards of Excellence include 21 awards in six categories:

“I’ll be presenting the awards at a public ceremony in June, and together we’ll celebrate achievements that benefit all of us by making Vancouver a greener, healthier, more diverse, accessible and prosperous city.”