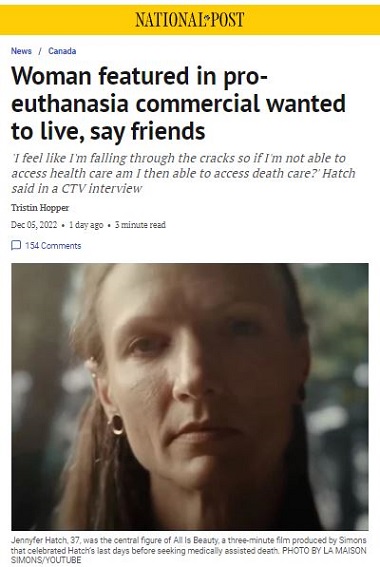 The pernicious nature of Canada’s expanding MAiD (Medical Assistance in Dying) initiatives seems finally to be dawning on the mainstream media, even south of the border and overseas.

The commentary – most of which relates to proposed legislation which would broaden the scope of MAiD to include people with mental illness alone – has been largely negative of late.

And outside of Canada:

We have ‘entered the dystopia’ 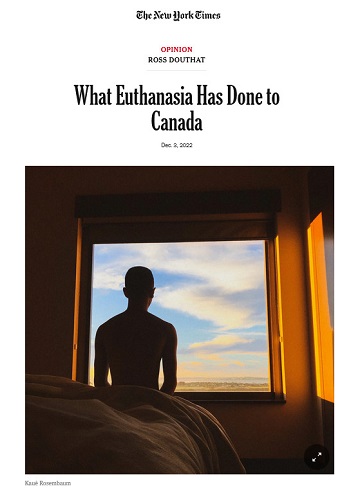 In his penetrating New York Times column (December 3), Ross Douthat asked, “What if a society remains liberal but ceases to be civilized?”

It is barbaric, however, to establish a bureaucratic system that offers death as a reliable treatment for suffering and enlists the healing profession in delivering this ‘cure.’

And while there may be worse evils ahead, this isn’t a slippery slope argument: When 10,000 people are availing themselves of your euthanasia system every year, you have already entered the dystopia.

Indeed, according to a lengthy report by Maria Cheng of The Associated Press, the Canadian system shows exactly the corrosive features that critics of assisted suicide anticipated, from health care workers allegedly suggesting euthanasia to their patients to sick people seeking a quietus for reasons linked to financial stress.

In these issues you can see the dark ways euthanasia interacts with other late-modern problems – the isolation imposed by family breakdown, the spread of chronic illness and depression, the pressure on aging, low-birthrate societies to cut their health care costs.

But the evil isn’t just in these interactions; it’s there in the foundation. The idea that human rights encompass a right to self-destruction, the conceit that people in a state of terrible suffering and vulnerability are really ‘free’ to make a choice that ends all choices, the idea that a healing profession should include death in its battery of treatments – these are inherently destructive ideas. Left unchecked, they will forge a cruel brave new world, a dehumanizing final chapter for the liberal story.

Many of Douthat’s arguments have been made in the past without, apparently, having dented the appeal of MAiD among the Canadian public. A November 10, 2020 report by Cardus referred to a poll conducted by the Angus Reid Group which showed “broad support” for MAiD, with “four in five (80 percent) of Canadians indicating it should be easier to make their own end-of-life decisions, compared to nearly three-quarters (73 percent) in 2016.”

What does seem to be getting through to people, recently, are several moving personal accounts. The first two have received widespread attention. 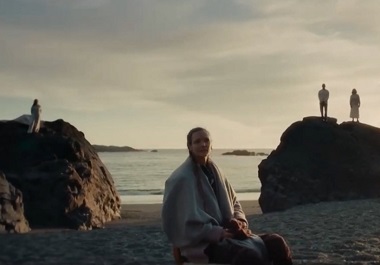 An image from ‘All is Beauty,’ posted to YouTube – and later removed – by Simons.

The woman featured in a glamourous pro-euthanasia commercial for a Canadian clothing retailer only opted for assisted suicide after her years-long attempts to secure proper health care failed, friends have revealed.

Jennyfer Hatch, 37, was the central figure of All is Beauty, a three-minute film produced by Simons that celebrated Hatch’s last days before seeking medically assisted death.

Last week, CTV confirmed that Hatch was the same woman who had spoken to them in June about her failed attempts to find proper treatment for Ehlers-Danlos syndrome, a rare and painful condition in which patients suffer from excessively fragile skin and connective tissues.

“I feel like I’m falling through the cracks so if I’m not able to access health care am I then able to access death care?’ And that’s what led me to look into MAID,” Hatch told CTV in June under a pseudonym.

Like more than a million British Columbians, Hatch was left without primary care after her family doctor moved away. And so, after her Ehlers-Danlos diagnosis 10 years ago, Hatch’s treatment had largely consisted of a chaotic and ineffective stream of specialist appointments, none of whom had any background in her condition. 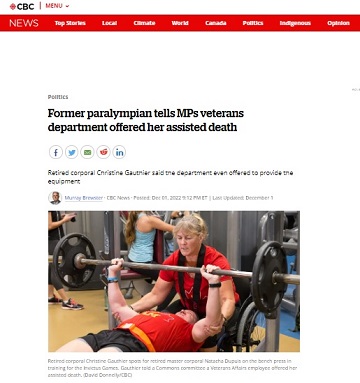 A paraplegic former member of the Canadian military shocked MPs on Thursday by testifying that the Department of Veterans Affairs offered her, in writing, the opportunity for a medically assisted death – and even offered to provide the equipment.

Retired corporal Christine Gauthier, who competed for Canada at the 2016 Rio de Janeiro Paralympics and the Invictus Games that same year, spoke before the House of Commons veterans committee and agreed to provide a copy of the letter. . . .

Testifying in French, she said she has been fighting for a home wheelchair ramp for five years and expressed her concerns about the assisted dying offer in a recent letter to Prime Minister Justin Trudeau.

“I sent a letter to Prime Minister Trudeau and that they offered me MAID and would supply equipment,” said Gauthier.

(A December 5 CBC News story reports ‘Veterans Affairs says it has no proof former paralympian was offered assisted death.’ Gautier said she “was shocked to hear the department’s denial.”) 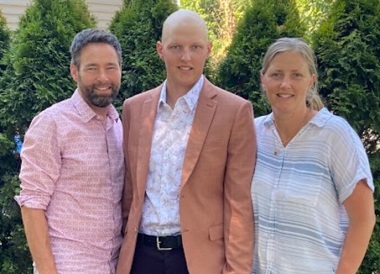 Mike and Jennifer Schouten with their late son Markus.

LifeSite reported on a moving presentation by a Fraser Valley couple who lost their son to cancer this spring:

The final presentation to the special joint parliamentary/senate committee on medical assistance in dying – made by one of Canada’s leading pro-life advocates – was a strong call to offer better medical help to the suffering rather than more access to euthanasia.

Last Friday [November 25] Mike Schouten, director of We Need a Law (a longstanding anti-abortion initiative) and director of advocacy for the Association for Reformed Political Action (ARPA) Canada, together with his wife Jennifer, made the appeal based on the excellent palliative care given to their 18-year-old son Markus before his death this spring.

Schouten said that if Markus had been offered euthanasia, “the message heard would have been clear: we don’t think your life is worth living and if you want, we can end it for you.”

That message, when given by authority figures such as parents or doctors to their dying children, “leads to despair – and that despair will lead to more requests for MAiD,” said Schouten.

Go here to watch Mike and Jennifer Schouten’s presentation to the Special Joint Committee on Medical Assistance in Dying. 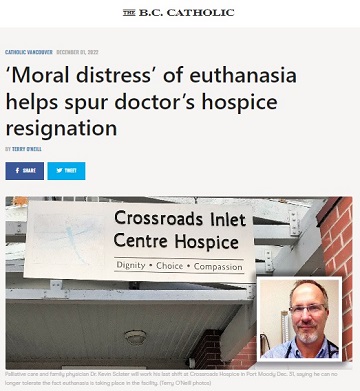 Just days after Crossroads Hospice in Port Moody announced November 19 that Sclater was ending his part-time work at the hospice to concentrate on his family practice, he told The B.C. Catholic in an interview that another important reason he decided to sever ties with the facility is because he can no longer tolerate the fact euthanasia is taking place there.

“For me, personally, the challenge as a physician working in a hospice – I am obliged to speak to people about MAiD (medical assistance in dying) if they initiate the conversation,” Sclater said. “I can do that so well that people will not know that my personal opinion about MAiD is completely opposed to it.

Sclater, an evangelical Christian, said he opposes euthanasia on many levels, including his personal ethics, the palliative care physician relationship “and even from a social perspective.”

Catholic teaching is unequivocal about assisted suicide. The Canadian Conference of Catholic Bishops said in a brief submitted to Parliament in May that the Church explicitly opposes any form of euthanasia and that any expansion of eligibility for assisted suicide “will only serve to erode the respect for the essential dignity of the human person and the common good of society, which must be committed to protecting and safeguarding vulnerable individuals and those without a voice.” 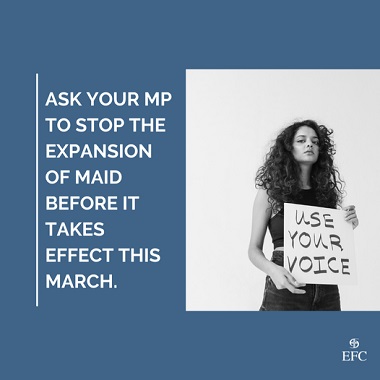 Several groups have been persistent in their opposition to MAiD. Here are a few to watch:

The EFC continues to address medical assistance in dying (MAiD) legislation in Canada and its planned expansion in March 2023. People with mental illness alone will become eligible for MAiD (euthanasia). They need hope.

In October, the EFC stated it was going to focus on two issues this fall – prostitution laws and MAiD. Go here for the EFC’s six-page ‘MAiD Expansion Action Kit 2022.’

As an NGO in Special Consultative Status with the UN (ECOSOC), CLF has been active in urging Canada to fulfill this international commitment [to Article 10 of the Convention on the Rights of Persons with Disabilities].

Specifically, CLF has, on multiple occasions, presented and echoed the concerns of a number of UN human rights experts about Canada’s laws related to medical assistance in dying. CLF also made submissions to the UN Committee on the Rights of Persons with Disabilities on these matters.

Go here for more. and here for information on CLF’s advocacy for conscience protection in healthcare.

Several other groups have been very active too. Read the December 1 statement by Ray Pennings of the think tank Cardus about Justice Minster David Lametti’s comments on doctor-assisted suicide, for example. Or check out No Options No Choice: “When they are at their most vulnerable, people may choose MAiD if they don’t have suitable options.”

All of them will take some comfort in the recent spate of negative coverage about MAiD, and may remember the Cardus statement based on the Angus Reid poll mentioned above, which suggested “that this support is not as unequivocal as it appears at first glance”:

Perspectives on MAiD are polarized, with a group of 33 percent being ‘Enthusiastic Supporters’ of MAiD on the one side, while a smaller group of 19 percent of Canadians on the other side is ‘Opposed’ to MAiD.

The largest group, however, is the 48 percent of ‘Cautious Supporters,’ who indicate support for the concept and legal rights of Canadians to access MAiD but express serious concerns about how MAiD might harm aging and vulnerable Canadians as well as the Canadian health-care system.