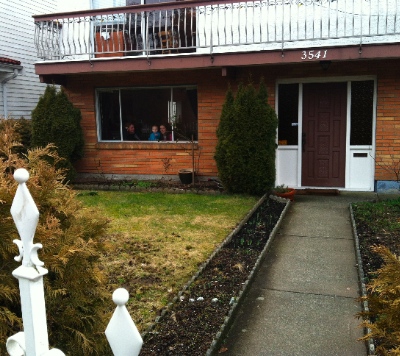 Forge Canada is hosting a Neighbourhood Engagement Weekend this Saturday (February 15) at Gracepoint Community Church in Surrey. Following is a story of how one couple from out of town went about meeting their Vancouver neighbours.

We have always wanted a front porch. I grew up with one in northern Indiana and can remember my parents sitting on the porch swing in the evenings, chatting with neighbours while I played with friends across the street. Other times, we would sit, content to be quiet, sharing just a glance or a wave with other neighbours on their porches. Whether talking or resting, we were together.

And so when Ryan and I, freshly married, moved into our first home, far from Indiana, in Vancouver, we were hoping for a porch. Although, we didn’t realize that desire at first. But as the first months and years began to pass without much contact with our new neighbours, we began to long for connection with them – for even the simple connections that a front porch could foster. While we lived in a high foot traffic neighbourhood, we rarely saw our neighbours outside enough to even share a quick wave. 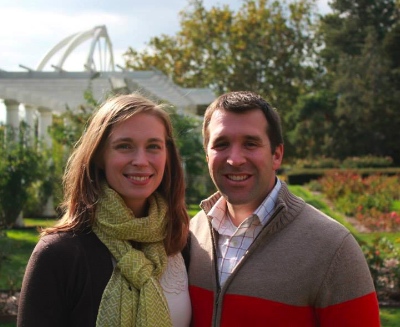 Kathryn and Ryan Cochran spent time in their front yard in order to meet their Vancouver neighbours.

One spring evening, Ryan had a good idea. In order to give me some free space to make dinner one afternoon, he took our oldest two daughters out front to play. Our backyard and patio were surrounded by a privacy fence and a lawn mostly torn up by our large, active dog. But the front yard was
open, spacious, green. Ready. With two little girls and a ball, Ryan set out to give that front yard a try.

And what happened? We began to meet people. As the air warmed from spring to summer, Ryan spent more time out there. He’d leave the front door open, sit on the front stoop and watch the girls play, talk on the phone, do work. He began to share waves with passers-by – many of whom spoke little English. They would compliment our children with gestures and words, delighting in simply seeing them play.

Playing out front made us accessible. Soon, a neighbour we had met once or twice brought her young grandson over to play with our girls. And then again. And again. We began to talk and swap stories about living in the neighbourhood. We received an invitation to dinner. At that dinner, we met another couple who had just moved in to the apartment building across the street. We shared stories about food and cooking, gardening and growing, while our children played around us. The more we played out front, the more we saw our new friends; and friends are what they had become.

The following spring, two of our neighbours, the apartment-dwellers with no yard, agreed to help us take on our torn-up backyard and plant seeds in one of Ryan’s garden plots. She is a professional chef and was eager for fresh-grown produce. He loves the dirt and hard work. So, he and Ryan dug and planted while they talked about life, seeds and the Great Sower of Seeds. That summer we watched, delighted, as kale and broccoli, rhubarb and blueberries grew, together.

Later that spring, we shared with our friends that we were moving back to Indiana. Ryan had received a call to pastor a church there, and we would be moving in September.

We made the most of our last months living near one another. We harvested our shared garden’s produce. We sipped cool drinks on the apartment patio. Our daughters played with the growing grandson. Our chef friend took a job at our church cooking meals for our Wednesday night gatherings. Her first dessert? A crumble made from our shared garden’s rhubarb.

Late in August, our neighbours came together to throw us a going-away bash. Our first intimate dinner had now opened the way to a gathering full of food and drinks, of children playing, of new neighbours congregating and laughing together. As we walked home that night Ryan and I said to one another, “How can we leave? We’re just getting started!”

When we put the final lock on the moving truck door the morning of September 1, we turned around to see our neighbours walking out of their front doors once more to greet us. They offered gifts: small stuffed toys for the girls; email addresses that we had never needed before; their help carrying our extra crib down to a single mom down the street; their presence with us as we locked up the house; and finally, they gave us their hugs and shared our tears as we climbed into the van.

We have lived in Indiana for five months now. We are in a temporary house, and it is cold. We rarely see a neighbour outside. In many ways, it is like our first months in Vancouver nine years ago. But we know what can be. What had only just gotten started.

We purchased our first home – a home with a front porch in a neighbourhood with porches. After some renovations, we hope to be living there by spring; the same season when Ryan first grazed the front grass with a ball and his daughters’ giggles. In the spring, when we met our neighbours.

Kathryn and Ryan have recently returned to their roots in the Midwest after living in Vancouver for nine years. Kathryn is a graduate of Regent College and makes use of her theological training through writing and her work as stay-at-home mom to their three daughters. Ryan was senior pastor at Ebenezer Baptist Church from 2004 – 2013, and now serves as senior pastor of an inner city church in Fort Wayne, Indiana.

This story is re-posted by permission from Missional Voice, Forge Canada’s newsletter.

1 comment for “Meeting our neighbours: It started with a front porch”