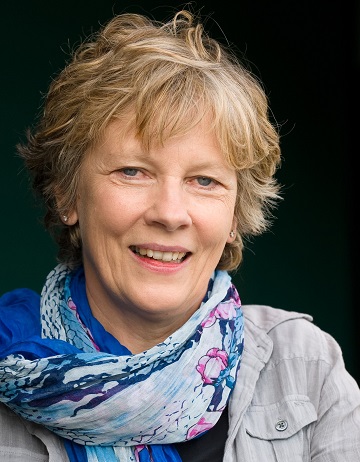 Evelyne Reisacher will be a featured speaker at Missions Fest Vancouver (January 27 – 29). A professor at Fuller Seminary and author of Joyful Witness in the Muslim World: Sharing the Gospel in Everyday Encounters, she describes the importance of practicing righteousness as we interact with Muslims.

A few years ago a precious Lebanese friend gave me a little wood carving of a cedar tree of Lebanon that I placed on my office desk at Fuller Theological Seminary, where I teach. It is engraved with the following words from Psalm 92:12: “The righteous shall grow like a cedar in Lebanon.”

When, at my desk, I take my eyes away from my computer screen, they often land on that inspiring verse, a reminder of what God promises to his followers.

That little ornament also reminds me of numerous visits to the beautiful country of Lebanon, and occasional walks through its northern forest of cedar trees. Although throughout the centuries lots of trees have been cut down and used as timber for building projects, people who like me have walked among the remaining trees understand why the righteous are compared to them.

Cedar trees are majestic. They are tall, wide and have an attractive fragrance. The quality of their timber is such that they were used to build the Solomon temple in Jerusalem.1 They symbolize vitality, robustness and longevity since they can live thousands of years. By comparing the righteous to a cedar tree, the psalmist clearly shows that righteousness is a prized virtue and a significant asset for society.

But what exactly does the word “righteous” mean in this Bible verse? Since this term is not in common use today, many people may have forgotten its meaning. The Hebrew word used in the original biblical text is tsadiq. His meaning could be summarized as living rightly or justly with God and with people.2

Pastor and theologian Timothy J. Keller shows that it refers to “a life of right relationships”3 and a “day-to-day living in which a person conducts all relationships in family and society with fairness, generosity and equity.”4

Another theologian, Walter Brueggemann says that “the ‘righteous person’ is characteristically one who invests in the community, showing special attentiveness to the poor and the needy.”5

As theologian John Goldingay rightly observed, the term “righteousness” has “relationship connotations.”6 He defines righteousness as “acting in the right way in relation to people with whom one is in a relationship.”7

All those definitions emphasize the importance for believers to be sensitive to the needs of others in their community and society, while they nurture a right relationship with God. They cannot live as if they were disconnected from their neighbours from far and near. They cannot bury their head in the sand and ignore the problems of those who are neglected, ill-treated or exploited. Righteous people are deeply concerned about people around them.

Old Testament professor James Bruckner asserts that, “the actions of a tsadiq clearly contribute to the long-term health and well-being of the community.”8

Unfortunately, I keep meeting people in Christian circles who do not believe that righteousness is key to mission. Perhaps they are afraid to be so consumed with ethical matters that they give up evangelism. Others may feel intimidated by the word itself, not knowing exactly what it means to be a righteous person.

It took me some time to realize how important righteousness is for Christian mission. In 1979, I joined a Christian fellowship of Muslim background believers in France, my home country. Together we experienced much joy but also witnessed much suffering.

Many believers from Muslim backgrounds felt ostracized by their Muslim friends and family when they made the decision to follow Christ. Others faced discrimination from French people upset by the high number of migrants in their country. A significant number could not find a job or an apartment because of ethnic discrimination. Some even faced suspicion and unjust treatment in their church.

One North African believer, for example, told me that in his church all staff members were given a set of church keys except him because leaders were suspicious of Arabs.

This is when I became aware that right living was key to ministry among Muslim background believers. I could not live my life as if Muslims around me did not exist and that their problems did not matter. They were indeed part of my community, society and country. Our lives were interconnected, whether we wanted it or not. I therefore decided to embrace the characteristics of righteousness, underlined by theologians above, in my interactions with Muslims.

I learned during those decades spent with Muslims and Muslim background believers that they pay attention to the way Christians behave and whether they are fair, equitable and generous.

Several years ago, I gave a talk on Christians and politics in Beirut, Lebanon. During the time of questions and answers, one Muslim student from the audience asked me: How can some Christians claim they worship a just God, while committing blatant acts of injustice in dealing with people from other cultures, ethnicities and religions?

This question made me aware that we don’t always listen when others feel unjustly treated especially those who are portrayed as enemies or rejected by our society.

God is a just God. The Bible portrays him as a tsadiq.9 He is indeed a righteous God who defends the rights of the fatherless, the oppressed, the poor, the widow, the orphan and the stranger. He is God who formed a covenant with human beings and wants them to be reconciled to him.

But the Lebanese student, at the end of my talk, was also concerned about the righteousness of Christians. Today, many Muslims, I know, feel that the rest of the world does not like them.10 They are often considered enemies instead of friends. Christians are wrestling with how to love them in a world threatened by violence and terrorism.11

I offer Christians one solution to the current relational impasse: practice righteousness in your interactions with Muslims.

After over 20 years in ministry with North Africans, I now teach Islamic Studies at Fuller Theological Seminary. Academic research offers me a whole new perspective on the place of justice and righteousness in Islam.

The following passages of the Qur’an, the most authoritative text in Islam, are an illustration of its multiple references to those virtues:

“Allah orders justice and good conduct and giving to relatives and forbids immorality and bad conduct and oppression.”12

“O you who have believed, be persistently standing firm for Allah, witnesses in justice, and do not let the hatred of a people prevent you from being just. Be just; that is nearer to righteousness. And fear Allah; indeed, Allah is Acquainted with what you do.”13

These verses, and many others in the Qur’an, suggest that one of the goals of Islam is to create a just society, where people honour God and care for others. This explains why Muslim leaders can rally enormous support from their followers when they ask them to fight injustices within families, neighbourhoods, countries or even the world. Righteousness is a central virtue of Islam.

Does this mean that Muslims have the same understanding of righteousness as Christians? Not exactly! There are distinctions in the way Muslims and Christians portray the righteous person.

Muslims follow divine standards of conduct as expressed in the Qur’an, whereas Christians adopt those expressed in the Bible.14 Muslims also do not ascribe the same role to Jesus, who is only a prophet to them. They do not believe that the righteousness of God “is being worked out in the life, death, resurrection and ascension of Christ.”15

But despite those differences, if we want to witness to Muslims living next to us, we must gain a reputation of being righteous. Oftentimes I have noticed that speaking about good conduct does not impress Muslims very much. They are more attentive to our witness, when we live a righteous life.

This fact is confirmed by a study conducted at Fuller Theological Seminary by J. Dudley Woodberry, senior professor of Islamic Studies who interviewed about 750 Muslim background believers. He found out that “respondents ranked the lifestyle of Christians as the most important influence in their decision to follow Christ.”16

Consequently, I suggest today to those who want to witness among Muslims: Don’t limit your witness to words, but live a righteous life among Muslims.

How? You can start with following the teachings of Jesus’ Sermon on the Mount!17 Follow those teachings in your interactions with Muslim neighbours. And never be afraid to add captions to your good deeds. Tell Muslims why you act justly toward them and explain that your life is committed to God and that Jesus is your saviour.

Choosing the path of righteousness in mission is choosing to thrive like the cedar tree. It grows best when planted in the house of the Lord.18 In other words, mission cannot take place without being deeply rooted in God.

In effect, could we envision reforesting those devastated spaces of Muslim-Christian interactions with lots of cedar trees represented by righteous Christians, who respectfully witness to Muslims in words and deeds? Perhaps those places are near you, even next door.

1 1 Kings 5:1-12.
2 Kent Brower writes that, “the basic biblical meaning of the term righteousness . . . is multivalent, describing appropriate actions and attitude in the context of relationships” (“Righteousness,” in Dictionary of Scripture and Ethics, ed. Joel Green, Grand Rapids, MI: Baker Academic, 2011, p. 685).
3 Tim Keller, Generous Justice: How God’s Grace Makes Us Just (London, UK: Penguin Books, 2012), p. 10.
4 Ibid.
5 Walter Brueggemann, Reverberations of Faith: A Theological Handbook of Old Testament Themes (Louisville, KY: Westminster John Knox Press, 2002), p. 177.
6 John Goldingay, Psalms: Volume 1: Psalms 1-41 (Grand Rapids, MI: Baker Academic, 2006), p. 593.
7 Ibid.
8 James K. Bruckner, Healthy Human Life: A Biblical Witness (Eugene, OR: Cascade Books, 2012), p. 98. Bruckner explains further, “In the Wisdom Literature (esp. Job and Proverbs) a tsadiq has specific characteristics. This person cares for the poor, the fatherless and widows, defends their causes in court, is a good steward of land and the non-human creation, lives at peace with neighbors, and is a joy to the family” (Ibid.).
9 Deuteronomy 32:3-4 (NIV) states, “I will proclaim the name of the LORD. Oh, praise the greatness of our God! He is the Rock, his works are perfect, and all his ways are just. A faithful God who does no wrong, upright and just is he.” See also, Isaiah 45:21 and 2 Chronicles 19:7.
10 See my recent article entitled “A Moratorium on Hospitality?” Fuller Studio, Spring 2016, at https://fullerstudio.fuller.edu/a-moratorium-on-hospitality/.
11 Watch my talk at the InterVarsity Urbana Conference in St Louis, MI, on December 29, 2015 entitled Welcome, Wisdom and Wonder, (https://www.youtube.com/watch?v=fNd0auxPdis).
12 Qur’an 16:90 (Sahih International translation).
13 Qur’an 5:8, (Sahih International translation).
14 Brower, “Righteousness,” p. 686.
15 Ibid.
16 J. Dudley Woodberry, Russell G. Shubin, and G. Marks, “Why Muslims Follow Jesus: The Results of a Recent Survey of Converts from Islam,” Christianity Today, October 24, 2007 at http://www.christianitytoday.com/ct/2007/october/42.80.html.
17 Matthew 5-7.
18 Psalm 92:13. 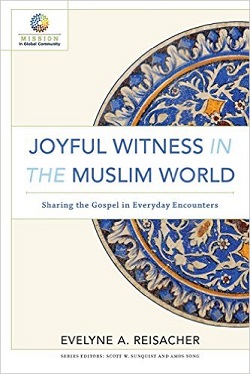 This article is re-posted by permission from the Missions Fest 2017 magazine.

Evelyne Reisacher is associate professor of Islamic studies and intercultural relations at Fuller Theological Seminary. Before joining Fuller, she worked at an organization called L’Ami for 20 years in France, facilitating the relationship between churches and North African immigrants. She is the author of Joyful Witness in the Muslim World: Sharing the Gospel in Everyday Encounters (Baker Academics, 2016) and is the general editor of Toward Respectful Understanding and Witness among Muslims: Festschrift in Honor of J. Dudley Woodberry (2012).

For a review of Joyful Witness in the Muslim World by Vancouver blogger Conrade Yap go here.

← Missions Fest 2017: Mukti Mission still creating beauty from ashes
Facing the fentanyl epidemic in the Downtown Eastside – and beyond →