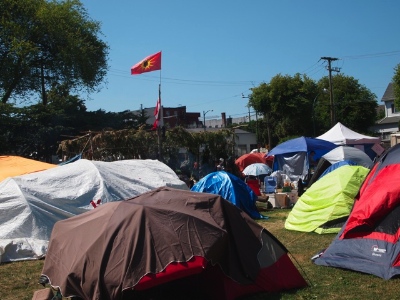 Oppenheimer Park tent city, in the heart of the Downtown Eastside.

The homeless are out in the open at the Oppenheimer Park tent city. Many who were hidden in shelters or sleeping in the bushes have occupied the Downtown Eastside park for more than two months now. The same is true in Abbotsford, where the homeless have been routed out of several camps.

The most recent issue of Downtown East has several articles addressing homelessness and urging all levels of government to tackle our housing crisis in a way that respects human dignity. Following are articles by Jean Swanson and Dave Diewert, re-posted by permission.

The homeless count for this year was the highest it’s ever been: 1,803 homeless people in Vancouver, and 2,777 in the Metro Vancouver area. And even the counters say that is an undercount. The Oppenheimer Park and Abbotsford Dignity Village tenters show with their presence that what’s been done isn’t solving the housing crisis. All three levels of government must do more.

Vancouver’s goal of ending only street homelessness has had an unwanted side-effect: until this year, most homeless people have been hidden in shelters. Not only are shelters expensive to run, they are not housing. People in them have little or no privacy, things get stolen, bed bugs get passed on. Often you have to leave in the morning and then wait in line in the evening to get back in. But when homeless people are hidden in shelters, people who aren’t homeless don’t notice them and stop pressing governments to take action.

So governments stopped acting. The federal government has pulled out of housing almost totally.

Many people think the province is building lots of housing. Since 2007 the province has funded social housing on 14 city owned sites for about 1,400 units. That’s only 200 units a year! In the 1980s the government built an average of 767 units of new social housing a year, just in Vancouver. People think a lot of housing is being built because the same projects are announced over and over again and because a lot of government news releases brag about them.

While the city obsessed with the Downtown Eastside Local Area Plan for three years, single room occupancy hotels (SROs), the last stop before homelessness, have been disappearing as low-income housing. These are single rooms, often 10 feet by 10 feet, with a bathroom down the hall and no kitchen. Often they are poorly managed and have mice, rats, bedbugs and cockroaches. It’s hard to live in an SRO and keep a job, get sleep and eat cheaply.

But because the Vancouver housing situation is so expensive, private investors have been buying up the hotels, evicting the low-income residents, renovating them slightly and then raising rents to the $550 to $1,000 range. No one should have to live in an SRO, but until there are alternatives, the city needs to use its powers to keep rents down and ensure decent maintenance.

The Oppenheimer Park campers are making homelessness visible again, showing how urgent the need for social housing is. No one should have to be homeless on the street or in a shelter, or live in a crummy SRO. Now our job is to push the three levels of government to fast-track more self-contained social housing.

Jean Swanson, a long-time anti-poverty activist, is coordinator at the Carnegie Community Action Project. Before her time at CCAP, she wrote Poor bashing: The Politics of Exclusion and worked with the End Legislated Poverty Coalition and the Downtown Eastside Residents’ Association. 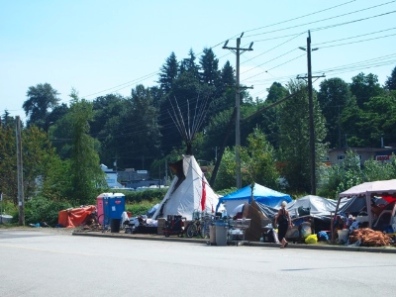 If there is one thing to learn from the City of Abbotsford, it’s how not to deal with the homeless crisis. Abbotsford’s main strategy is to push homeless people from one place to another, hoping that they will leave town altogether or disappear into places where they are no longer visible.

While homelessness in Abbotsford has increased by 29 percent in the past three years, homeless campers have had their tents slashed, property destroyed and belongings pepper sprayed by the police to intimidate them to leave.

In June 2013, the city ordered a truck-load of chicken manure to be dumped on the site of a homeless camp after forcing its residents to leave, in an effort to keep them from returning.

In response, the Abbotsford chapter of the Drug War Survivors established a Dignity Village homeless camp in Jubilee Park on October 20, 2013. Clustered around a teepee that was set up with traditional protocols, it made the homeless crisis visible once again in the middle of the city.

The city responded by issuing an injunction against the camp just a few days before Christmas, and the homeless folks in Jubilee Park were forced out under the watchful eye of the police. A few were given housing; many simply moved to another location beside the railway tracks along Gladys Avenue. The teepee was erected again, and this site became the new Dignity Village.

Meanwhile, in a vote of 4-3, Abbotsford’s city council rejected a 20-unit social housing project that would have offered decent housing for some. Remarkably, a city gaining recognition for its homeless crisis and its abusive treatment of homeless people turned down a provincially-funded housing project.

A number of homeless camps emerged along the street next to the train tracks, and across the street from the Salvation Army. Despite the land being unceded Indigenous territory, BC Hydro claimed ownership of it and posted No Trespassing signs along with notices to vacate by July 31, 2014.

When that day arrived, so did the outreach workers and volunteers to help with the removal of the homeless people and their belongings. Scattered to the winds, they moved off into the bushes or other locations where they had previously set up their tents. The group of tents surrounding the teepee, however, was not on BC Hydro’s claimed land and so Abbotsford’s Dignity Village remained, 10 months after it was launched in Jubilee Park.

Cities want to make homeless people disappear rather than become active advocates for low-income housing. But in Abbotsford and Vancouver people are making the crisis visible and demanding real solutions. Through their struggles for justice, these homeless fighters are also improving the conditions of their lives, and building communities of resistance.

As long-time Dignity Village leader, Calvin, said the camp has successfully resisted and pushed back police violence and harassment of homeless people in Abbotsford: “They can’t attack us anymore because we showed them.” It’s a strong call for justice arising from those most impacted, and it requires our ongoing solidarity and support.

Dave Diewert is an organizer in anti-gentrification and social housing campaigns in Vancouver’s Downtown Eastside. Born and raised in Vancouver, he taught at Regent College for more than 20 years, and is now a lecturer at UBC. He is an organizer with Streams of Justice, a faith-based social justice group which meets at Grandview Calvary Baptist Church.