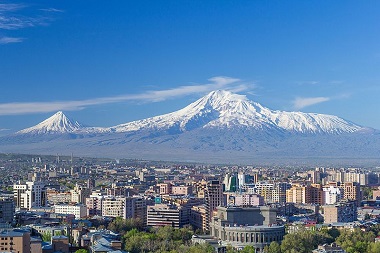 For those who await my weekly Church for Vancouver updates with bated breath (and even those few who don’t), I have some news. Over the next five weeks, updates will continue, but there will be one story each week instead of four.

My friend and colleague Jonathan Bird has been good enough to agree to provide those stories. He is already a busy man, running City Gate Leadership Forum and undertaking several other initiatives which link and provide resources to the local church, but we have collaborated on several projects over the years (Vancouver Consultation / City Summit, for example) and hope to be working even more closely together in the future.

On Friday (October 12), my wife Margaret and I will fly to Yerevan, Armenia to kick off a month-long trip to celebrate our 40th anniversary. We will spend roughly a week each in Armenia, Georgia, Malta and England.

We have long been interested in the Caucasus region and are very much looking forward to seeing some gorgeous mountain scenery and experiencing their ancient cultures. But we also love the fact that we’ll be visiting nations which have such deep and significant Christian roots:

Armenia was the first country in the world to adopt Christianity as a state religion in 301 AD. Christianity has played an immensely important role in the shaping of the Armenian people for over 1,700 years. Religion has been an essential part of Armenian identity and has reshaped the course of history.

As a matter of fact, Christian communities were established in Armenia way before Christianity was declared as the state religion. Since 40 AD, the preaching of Thaddeus and Bartholomew, two out of 12 apostles, have left the mark on Armenia.

Overall, adults ages 18 to 39 are less likely than those ages 40 and older to say religion is very important to them in 46 out of 106 countries surveyed by Pew Research Center over the last decade. In 58 countries, there are no significant differences between younger and older adults on this question.

And just two countries – the former Soviet republic of Georgia and the West African country of Ghana – have younger adults who are, on average, more religious than their elders.

Christianity has almost 2,000 years of history in Malta. According to tradition, it was brought to the Islands by none other than the Apostle Paul himself in around AD 60.

Paul was being taken to Rome to be tried as a political rebel, but the ship carrying him and some 274 others was caught in a violent storm only to be wrecked two weeks later on the Maltese coast. All aboard swam safely to land. . . .

Our friends John and Brenda Bailey will be putting us up. He recently retired as an Anglican priest in this diocese and will be interim priest in charge for six weeks or so at Holy Trinity Parish, Sliema.

This time we’ll be in London for a few days, but I’ll also attend the New Parish Conference in Birmingham. Anyone who has taken part in the Inhabit conferences down in Seattle will recognize the names of organizers Tim Soerens and Paul Sparks, but there will be lots of like-minded British speakers as well at ‘Refounding Church by Learning to Love Our Neighbour.’

The Events Calendar and Jobs sections of Church for Vancouver shouldn’t be much affected while I’m away; I hope to be able to take care of them from overseas.

I’m looking forward to the voyage and keeping in mind the wise words of some country singer: “How can I miss you if you won’t go away.”

And Izaak Walton’s “Good company in a journey makes the way seem shorter.”

4 comments for “Overseas for a month, Church for Vancouver will carry on”