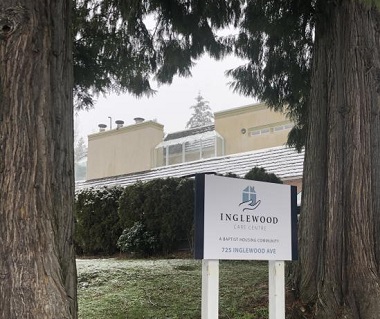 Baptist Housing will now be looking after Inglewood Care Centre.

NDP MLA Bowinn Ma tweeted her support for a deal in which the provincial government will provide more than $100 million in financing to help Baptist Housing purchase a large seniors’ home in West Vancouver.

One of the largest care homes on the North Shore has been sold to a non-profit society for redevelopment, with over $100 million in financing provided by the BC government.

This seniors’ care facility will now focus on people, not profits. With $114 million in provincial financing, we were able to help non-profit @BaptistHousing purchase Inglewood Care Centre from a private operator known for contract flipping. #WestVan

A press release from Baptist Housing described the arrangement:

The province is partnering with Baptist Housing and Vancouver Coastal Health on a proposal to redevelop Inglewood Care Centre, which is aging and in need of extensive renovations.

On February 3, Baptist Housing, a non-profit provider, took over operations of the 230-unit care centre located at 725 Inglewood Ave. It is working with residents and Vancouver Coastal Health to improve day-to-day management of the building and the quality of services.

BC Housing, through the HousingHub, provided financing of approximately $114 million to Baptist Housing to purchase the care centre and three adjacent lots. Baptist Housing provided an additional $14.5 million of its own equity toward the purchase.

In the coming months, project partners will work with the District of West Vancouver on rezoning and permit applications. This redevelopment would replace the existing 230 beds, with the potential of adding more beds in the future. Existing residents would not be displaced as a result of this project.

In addition to the proposed redevelopment, Baptist Housing will explore additional opportunities to expand housing and care services on the property. Once a proposal is ready, partners will ask the public for input.

Delivering affordable housing is a shared priority between government and the BC Green Party caucus, and is part of the Confidence and Supply Agreement.

Providing housing and support for our seniors as they age and their needs change is a priority for West Vancouver council. Baptist Housing has demonstrated an excellent standard of care in many BC communities, and we look forward to working with them here to meet these critical community needs. 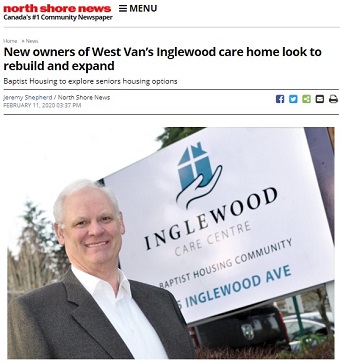 A North Shore News article addressed the fact that the government is partnering with a Christian group:

Despite the organization’s name, [Baptist Housing] chief operating officer Marc Kinna emphasized that there are no barriers in terms of who can live in their facilities.

“Baptist Housing welcomes people from all backgrounds, all faith traditions, all ethnicities,” he said.

Council was largely enthusiastic about the prospect of Baptist Housing taking over the site, with Mayor Mary-Ann Booth noting her mother-in-law is “very happy” in a Baptist Housing facility.

“I think everyone on council thinks this is a great opportunity to revitalize that aging facility,” Councillor Peter Lambur agreed.

Baptist Housing built its first senior living community in the Killarney area of Vancouver. In 1964, they had 172 residents with eight team members. Now, 2,075 team members serve more than 2,750 residents.

An article in The Vancouver Sun noted:

The investment aligns with BC’s 10-year housing plan to partner with local governments, non-profit and co-operative housing organizations and other groups to cover the full spectrum of housing needs for British Columbians by 2028. The province’s 2018 budget included a $7 billion investment in affordable housing.

I wrote an article about Baptist Housing when it celebrated its 50th birthday in 2014. And the end of another article links to several other Christian groups (More Than a Roof, BG Homes and others) which also provide substantial public housing.