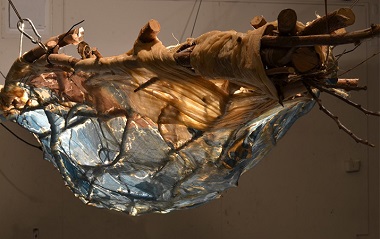 An installation by Metro Vancouver artist Erica Grimm is part of a stations of the cross art exhibition in Amsterdam.

Following is an article about her work and the ‘Troubled Waters’ exhibition from ArtWay, an impressive and extensive website whose vision statement begins with these words: “Motivated by a Christian view of life, ArtWay seeks to open up the world of the visual arts to the interested lay man and woman. Our goal is to hand people a key to this world that is rich and fascinating yet sometimes hard to enter.”

During the walk along the stations of the cross it is tradition to read texts that bring the stations to life for the believers by relating them to recognizable suffering in their own lives and in the world around them.

Water also plays an important part in today’s global problems – think of seas as barriers for refugees, exploitive trade and fishing, the plastic soup in the oceans, tsunamis and the loss of coral reefs. 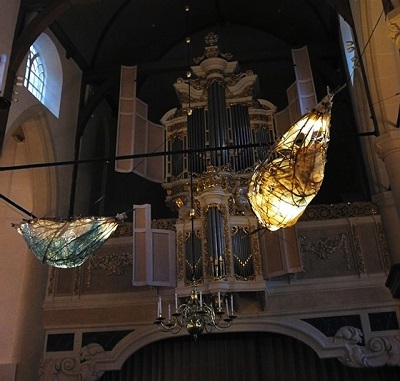 Linked to Station 11, Jesus is Nailed to the Cross, is the installation Salt Water Skin Boats by Canadian artist Erica Grimm in collaboration with Tracie Stewart (artist and arborist) and Sheinagh Anderson (sound artist).

This work raises the issue of the earth-threatening ocean change. The installation consists of five so-called lifeboats made of branches of willow, dogwood, fig and cedar, cheesecloth, animal skin, gut and layers of wax. Poems, bathymetric ocean maps and scientific formulae about the melting of the ice sheet, the rising sea level and the acidification of the water have been applied to the hulls.

The vulnerable skin boats show the interconnectedness of the life and decline of the oceans and our own salt water filled bodies: they are boats but also human bodies whose life is dependent on the condition of the worldwide water. The ambient soundscape embodies the sounds of water, wind, the breathing and the heartbeat of the oceanic world, intermittently interrupted by the voices of technology and science – sonar, submarine, ship and plane.

The light that falls through the windows of the Waalse Kerk and the lamps that illuminate the boats from within reveal the beauty of the coracles. The oceans are so incredibly beautiful, so full of life, but in the last 200 years human actions have changed the chemistry of the ocean – which deeply affects our own existence as well. We crucified God’s son. Is it now creation’s turn?

For Erica this is not just a nice theme to dedicate one of her works to. When you speak with her, it even seems like the subject itself is of greater concern to her than the artistic side of the installation. She kept on asking me questions about the attention for environmental problems in the Netherlands and how we deal with them: only on an individual level or also structurally by government and the will of industries.

Someone described her short talk during the vernissage of the exhibition as an ecological fire-and-brimstone sermon:

In my view, there is no greater issue right now than water. I can well imagine that there have been, and will continue to be, projects intended to raise awareness as urgent action is so necessary. Ocean change is one of the primary catalysts for climate change and therefore all the cascading social and infrastructure implications including the refugee crisis. Despite the scientific evidence demonstrating the magnitude of climate change problems, many simply deny the implications of the Anthropocene. 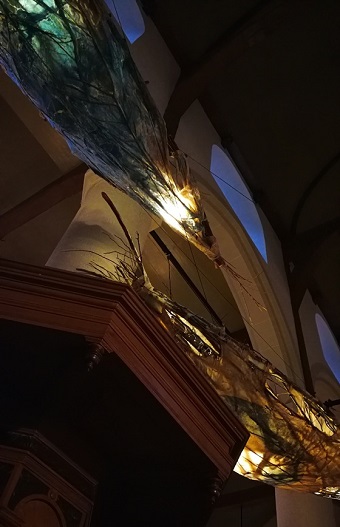 Have we heard it all before? “Why is it that we do not undertake more action, also the people who do not bury their heads in the sand?”, Erica asked me. Not an easy question. Is the overflow of information to blame or the overfullness of our lives: today this problem, tomorrow another? Or does it become too difficult when it is really going to cost us?

I replied that it is hard to be really touched by problems at such a global magnitude, to feel them deeply within, deeper than our heads alone. That we need to quieten down for that to happen. I said that art asks for meditative quietness and therefore can help us let the suffering of creation land in the depth of our hearts.

At the opening philosopher Désanne van Brederode said something similar in her speech: “Everything we have just done needs to be discussed nowadays: from yoga class to a visit to the museum. ‘Do you want to talk about it?’ Not really, rather guard it in your inner room, in your Garden of Olives. ‘You could not keep watch with me for one hour?’”

Location: Waalse Kerk (Walloon Church), Walenpleintje 159, Amsterdam. In 1578 the Church of the Brothers of Saint Paul that was put at the disposal of French-speaking Protestant refugees fleeing from the Southern Netherlands and France in the 17th century and has thenceforth been called the Église Wallonne (Waalse Kerk or Walloon Church). The church is still being used for services and is also known as an excellent concert platform with amazing acoustics and a great Müller organ. www.waalsekerk.nl 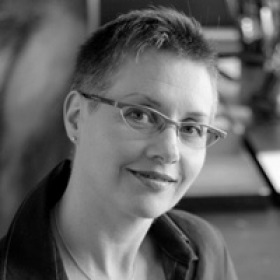 Erica Grimm is a Canadian visual artist and professor in the School of the Arts, Media and Culture at Trinity Western University. Canada Council and SSHRC Grant holder, Erica’s creative practice is rooted in drawing and she is curious about phenomenal embodied, liminal or saturated, inexplicable but ordinary experiences. Fueled by environmental urgency, she creates what she describes as “material semiotic entanglements”, sculptural installations that layer materials with scientific texts, maps, medical imagery, video and sound, drawing in space with anything at hand. She explores the entangled territory between aesthetics, ecology, ethics, science and art. In 2002 she was the Distinguished Nash Lecturer, received the Imago National Juried Art Prize, and was appointed University of Regina Distinguished Alumna. Widely exhibited, her work is found in public collections such as the Canada Council Art Bank + the Richmond Art Gallery. Her written practice considers the epistemological implications of the process of making. The Aesthetics of Attentiveness is forthcoming from Wilfred Laurier University Press. www.ericagrimm.com

Marleen Hengelaar-Rookmaaker is ArtWay’s editor-in-chief and co-curator of Art Stations of the Cross.

ArtWay’s associate editor is Laurel Gasque, an author and theologian who lectures in art history at Trinity Western University. Go here for more background on both of them, and on the rest of the ArtWay team.

To take an online tour of Art Stations of the Cross go here.