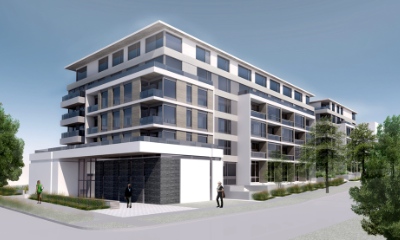 South Cambie Gospel Hall will occupy the bottom floor of this complex, once it is built.

For some 55 years, South Cambie Gospel Hall, at 60th Avenue and Cambie Street in south Vancouver has been a landmark on the corner, its sleek and simple lines providing a restful image to the thousands of drivers passing its doors every day.

The little congregation that meets there identifies itself as The Church of God in Vancouver (COGV). Numbering about 20 people, it was planted in 1939, as part of a worldwide fellowship which has been described by church historians as the Needed Truth branch of the Plymouth Brethren1 (or Christian Brethren) movement.

This fall, the church enters a new era, spurred on by SkyTrain’s Canada Line and Vancouver city’s designation of a major high density urban cluster surrounding the line’s nearby Marine Drive station.

A press release issued by the church leadership states:

We are a worshiping, prayerful group of committed Christians who value sound teaching from the Word of God and who want to reach out to our community with the message of God’s love and peace that we believe is uniquely found in Jesus Christ, the Son God gave to reach out to us.

We are a culturally diverse group . . . It doesn’t matter where you are coming from or where you find yourself right now; we want to support each other in getting to know where God wants us to be. 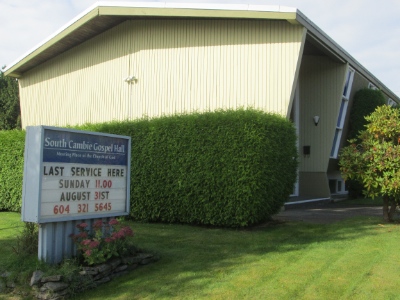 South Cambie Gospel Hall has been active in Vancouver since 1939.

Church for Vancouver talked to Kevin Jones, a retired British businessman immigrant who devotes a fair amount of energy to helping COGV through its transition. The fact is, he notes, the church has been sitting on a valuable piece of property. “We did not want to move, though we were offered vast amounts of money to do so.”

The press release describes the pathway the church will take over the next few years, as a result of negotiations with the developer that acquired their gospel hall and its property. It notes:

In the next few months our current site will be demolished and a new development of rentable condos will be built on the 60th and 61st block of Cambie, including our community church which will have a beautiful, modern space built into the complex.

We want to reassure the people of the South Cambie, Marpole and Langara neighbourhood, and further afield, we are still going to be committed to making sure that the redevelopment is utilized to build a stronger and more supportive community in what is becoming a new urban hub for Vancouver.

While the development is being constructed, we will continue to meet for all our regular services and gatherings in the Peretz Center on 6184 Ash St and everyone in the community is welcome to come along and join us there for worship, praise, prayer, Bible discussion and teaching. 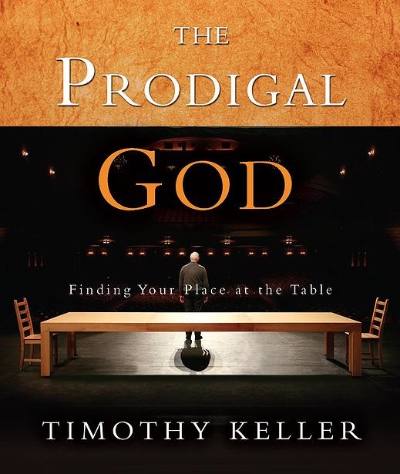 South Cambie Gospel Hall will be running an eight-week course of Bible study based on Tim Keller’s ‘The Prodigal God,’ starting October 5.

As he contemplates what will actually happen at the Peretz Centre and in their new church, Kevin speaks of the video series planned for this fall, featuring Tim Keller, minister of New York City’s famed Redeemer Presbyterian Church. Keller, he says, has been a leader in developing a several-thousand-strong multi-site congregation in the Manhattan metropolis. He indicates that the pastor has utilized sound and orthodox biblical teaching to attract congregants serious about focusing on the redeemer and the Bible in shaping their lives in an urban setting.

In addition, Keller has been a key leader in The Gospel Coalition. The Coalition is a network of North American churches and pastors who are committed to an orthodox and fairly Calvinistic perspective on Christianity which, in most respects, resonates with the folk who meet at South Cambie Gospel Hall.

But Kevin and the church’s two elders, John Robinson, a family physician and Jim Bell, a retired teacher, are not relying on a vision hatched in New York City, as they contemplate the changes that will take place over the next few years.

“This is the way forward,” Kevin says, referring to the move into a 3,000 square foot, well-appointed ground floor space the church will occupy. “We are recognizing the realities put forward by urban land assembly specialists.” 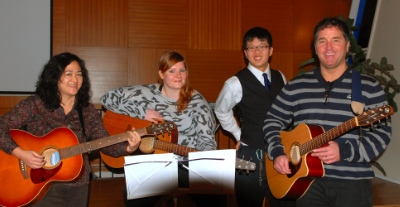 “The key thing is to see how we grow into it, notes Kevin. “Our best gifts are in teaching, preaching the gospel, small group discussion and explaining the scriptures. And we are a multicultural English-speaking church.”

But he does not rule out expanding church programs to respond to other community needs, once they are settled in the urban centre which will grow around their church and other anchor activities – not the least of which is the nearby Canada Line station.

It will be important, Kevin says, to make the space they will have “flexible” to meet the various needs the church will be able to identify.

Further information about COGV’s transitional plans can be found here, or by emailing COGVancouver@gmail.com.

1. The Plymouth Brethren originally spun off from Anglicanism in 1825 in Great Britain, led by John Nelson Darby, the ‘father’ of dispensationalism. The movement historically divided into several segments, tagged Exclusive, Closed and Open. The Exclusive and Closed meeting places, in North America, have generally been described as meeting halls or gospel halls; the Open gatherings have been known as Bible chapels or gospel chapels. In Vancouver, the founding of Regent College was substantially influenced by the Open Brethren (Granville Chapel, University Chapel and Marineview Chapel were the home churches of many of Regent’s founding leaders).

← An interview with the creators of the Alpha Youth Film Series
Video games matter: Of Games and God →