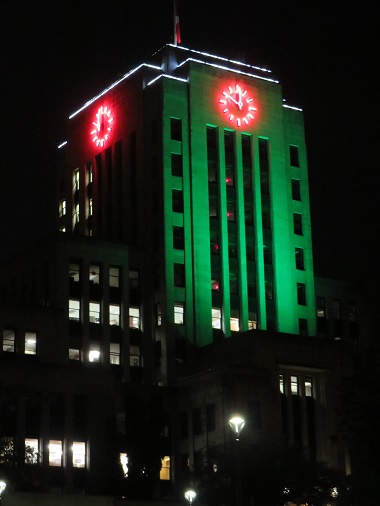 On the evening of October 1 the north face of Vancouver City Hall was lit up with green lights, to kick off Islamic History Month celebrations.

That was the third Islam-focused event sponsored by the City of Vancouver this year (that I’m aware of), and it seems to me something is out of balance, both because other religious groups don’t have a similar degree of representation and because events like Islamic History Month don’t offer an even-handed perspective.

Maybe I am feeling particularly sensitive because Azerbaijan is attacking the enclave of ethnic Armenians in Nagorno-Karabakh (officially, Republic of Artsakh), which Margaret and I visited a couple of years ago, and because we just read a troubling book about the near extinction of the Christian church in the Middle East.

During the summer I sent an email to the City of Vancouver, asking why we had two Islam-related Official Celebrations and Observances – a Day of Remembrance and Action on Islamophobia (January 29) and Eid-al-Adha (August). 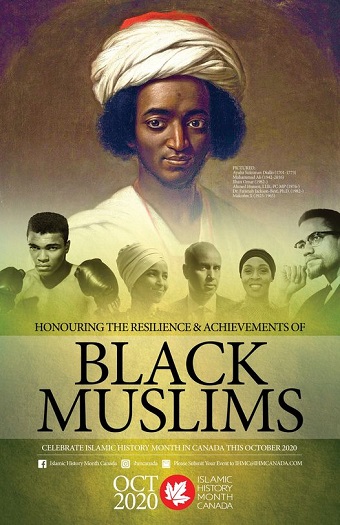 I had two concerns – that there was nothing representing Christianity and that it is odd to focus on Islamophobia when the persecution of Christians is rampant around the world, particularly in Muslim nations.

If you check out Open Doors’ World Watch List of the 50 nations with the highest levels of persecution of Christian believers, 31 involve ‘Islamic oppression’ and 35 are nations where the main religion is Islam (in two cases – Nigeria and Eritrea – shared with Christianity).

And I made those comments before I knew about the city’s plans to also celebrate Islamic History Month.

I was told, in a very polite and responsive return email, that Christmas was supposed to be on the list, and had just been left off inadvertently.

It has now been added (and it is true that the city lights up a giant Christmas tree in front of City Hall every winter). But Christmas is a holiday broadly shared throughout the community, not viewed particularly, by many, as a real religious holiday.

No other religious holidays or events are mentioned on the list of celebrations and observances – nothing Christian, but also no Buddhist, Jewish, Sikh, Hindu or other events. The closest to religious events would be the Persian New Year / Nowruz (March 20) and Diwali / Festival of Lights (October, November).

The religious significance of Eid-al-Adha to the Muslim world is underplayed, described as having “links to. . . the history of Islam, Judaism and Christianity through their common Abrahamic heritage.” In fact, Eid-al-Adha is one of the holiest days celebrated annually by Muslims around the world.

On January 29 “a white gunman entered the Islamic Cultural Centre mosque in Quebec City and opened fire on dozens of Muslim worshippers. . . . Muslim communities across Canada were, and continue to be, affected by this and other acts of hate, racism, white supremacy and islamophobia.

The attack deserves condemnation. It is a national shame, and we need to keep ourselves and our children from intolerance. However, ongoing persecution of religious groups, especially minorities, is a worldwide scourge, and Christians suffer most of all. 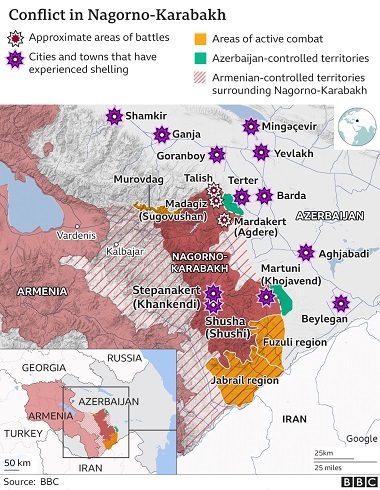 The situation in Nagorno-Karabakh (Republic of Artsakh) reflects the challenges of living in the midst of an area dominated by Islam.

Azerbaijan is bombing Stepanakert, the capital of Nagorno-Karabakh. Even two years ago, amid the dynamic energy, re-building and growth, there was a nearly palpable sense that war could erupt at any moment.

The battle over Nagorno-Karabakh, and the security of the Armenian people in the whole region, have deep roots.

A very helpful article just posted by Jayson Caspar on the Christianity Today site begins with these words:

Fierce fighting has broken out in the Caucasus Mountains between the Caspian and Black Seas, pitting Christian Armenians versus Muslim Azeris.

But is it right to employ their religious labels?

The answer is yes, though the article does reflect the messiness of the situation, which involves ethnic identities and politics along with religion. 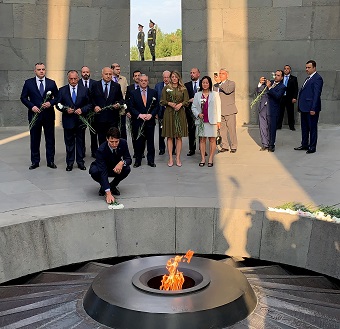 Prime Minister Justin Trudeau referred to this dark past when he made a statement on Armenian Genocide Memorial Day April 24; he began:

Today, we join Armenian communities in Canada and around the world to commemorate and honour the memory of victims of the Armenian genocide – a dark period of history that we must never forget.

He had visited the Armenian Genocide Memorial and Museum in Yerevan, the capital of Armenia, just a couple of days before us in 2018.

We walked through the halls of horror, with displays showing how the Turkish government destroyed Armenian culture in much of what is now eastern Turkey in the late 19th and early 20th century, killing well over a million people in the process.

That is the background to the fighting between Azerbaijan and Nagorno-Karabakh.

The Christianity Today article points out that while there have been many skirmishes and battles since a ceasefire was declared in 1994, this one looks particularly serious, in particular because of Turkey’s role:

Turkey’s involvement has awakened the worst fears – or perhaps rhetoric – among Armenians.

“The Turkish state, which continues to deny the past,” said Armenian Prime Minister Nikol Pashinyan, “is once again venturing down a genocidal path.” 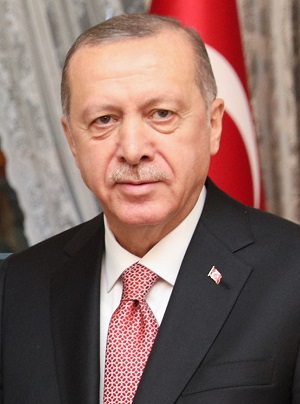 The rhetoric of Turkish President Recep Erdogan does not help. He labeled Armenia “the biggest threat to peace” in the region. In the past, he has called Armenians and other Christians in Turkey “leftovers of the sword,” referring to those who survived the genocide – a term he rejects.

Azerbaijanis, though majority Shiite Muslim by religion, are the world’s second-largest Turkic ethnic group after the majority Sunni Turks in Turkey. The groups characterize their relationship as “two states, one nation.”

A May 11 article on the Genocide Project website is titled “Erdogan uses ‘Leftovers of the Sword’ anti-Christian hate speech”:

As the Christianity Today article points out, “the overlap of religion, ethnicity, and politics makes some uncomfortable.” And the story goes back even further than early last century. 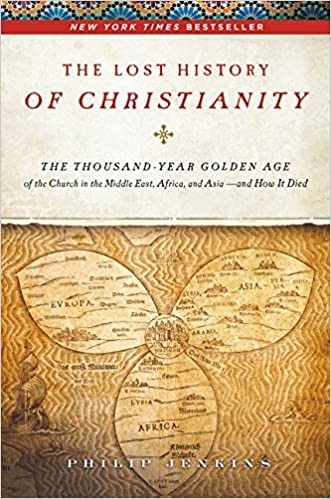 Philip Jenkins describes that background in his impressive book, The Lost History of Christianity, which our son read aloud to us this summer.

Islam was not uniquely prone to persecution, and Muslim regimes generally behaved no worse than others: Christian states have little to boast of in their own treatment of religious minorities. . . .

Anyone who believes that boundless aggression and ruthless tyranny over minorities are built into the DNA of Islam needs to explain the quite benevolent nature of Muslim rule during its first six centuries; but advocates of Islamic tolerance must work just as hard to account for the later years of the religion’s historical experience.

So extensive, indeed, were persecutions and reductions of minority groups, from the Middle Ages through the 20th century, that it is astonishing how little they have registered in popular consciousness, or how readily the myth of Muslim tolerance has been accepted.

One factor distorting memory has been the total oblivion into which the non-European Christian communities have fallen, and the assumption that the familiar realities of the present day must always have existed. For those accustomed to a near-solidly Muslim Middle East it seems incredible that a different situation might ever have existed, or if it did, that it could ever have experienced a different outcome. 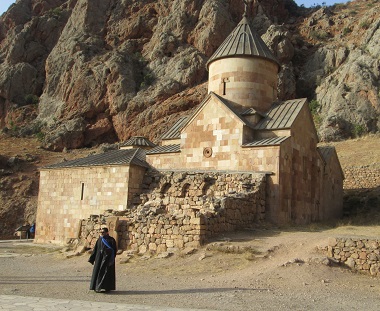 Armenia has been a Christian nation since the early 4th century.

Armenia, the oldest Christian nation in the world, has endured all these trials and tribulations. In a section titled ‘Becoming Turkey,’ Jenkins writes:

In Asia Minor, meanwhile, the growing centrality of religious motivations made the endemic cycle of violence still more bitter, as Turkish forces became even harsher to Christian enemies of all sects and denominations.

In 1304, Turkish forces obliterated the city of Ephesus, where Paul once confronted a mob chanting the glories of Artemis: all Christians were either killed or deported.

It is not surprising that Nagorno-Karabakh and Armenia feel the need to protect themselves from the ‘two states, one nation’ hemming them in on the east and west.

Back to city hall

Some might think that concerns related to Official Celebrations and Observances in Vancouver are trivial, but I suggest that what our city chooses to celebrate and observe reflects what it thinks is important, in much the same way as naming streets or erecting statues is important.

If there is a widely shared desire for discussion about Islamic history, let’s have it. But let’s make sure other histories are being celebrated (and investigated) as well.

Probably the best thing would be to remove all the special observance months and days, but in this era of identity politics, that seems a remote possibility.

A city spokesperson told me several things about the Official Celebrations and Observances:

1. They have been added from time to time: “A couple of examples of new requests for acknowledgement, official and unofficial, respectively, are:
* International Holocaust Remembrance Day – January 29 and
* Louis Riel Day / Week – November 16″
2. “Islamic History Month is not one of the Council-approved ‘official celebrations and observances.’ There are many groups and organizations that the City of Vancouver supports and this is one of them.”
3. Regarding a planned revision of guidelines related to city-sanctioned celebrations and events: “We anticipated the report going to Council in the spring, however, due to COVID, many things have been pushed ahead or are put on hold.”
4. Thus it seems that new events / celebrations / observances can be added if there is sufficient interest from the community and, presumably, some could be removed if there is enough opposition. (This is my reading, not directly from the city hall staff member.)

To make a comment about the City of Vancouver and its activities go here.

One other thing. The city may or may not want to offer support to Armenia (as the Prime Minister has), but local churches could contact St. Vartan Armenian Apostolic Church (in Vancouver) to see what support they need. A second church – St. Gregory the Illuminator – is in Richmond.