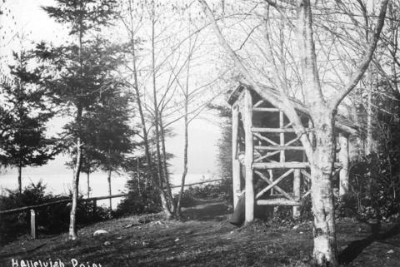 This photo from about 1900 shows a woman seated at the Salvation Army’s picnic shelter at Hallelujah Point. City of Vancouver Archives (CVA 677-180.13)

This weekend Vancouver celebrates Stanley Park’s 125th birthday. Five ‘festival zones’ around the park will host a wide variety of activities, from concerts, historical tours and cricket games to Coast Salish cultural displays and nature walks. It looks like a great party!

I don’t see any references to church activity on the city’s ‘Celebrate! Stanley Park’ site, but there are some really interesting connections, if you keep your eyes open. 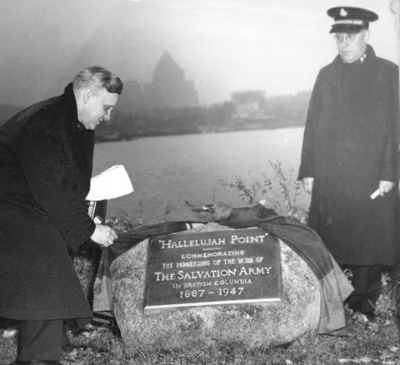 The first connection isn’t hard to track down. As you carry on along the waterfront, past HMCS Discovery on Deadman’s Island, but before you reach Brockton Point, you’ll see a wooden sign and a couple of plaques which recall the Salvation Army’s adoption of this portion of Stanley Park for a picnic area and chapel.

From Davis’s website, still maintained by Harbour Publishing after his death in 2010:

“The Salvation Army had arrived in Vancouver in December 1887, holding their first meetings above a grocery store at Abbott and Water Streets. But when the weather was nice the ‘Hallelujah Lassies’ and other adherents would go across the water – ‘armed with flag, drum and tambourine’ – to Johnny Baker’s [a settler who had lived there for a time] clearing and have picnics there.

“They built a simple shelter and a picnic table, and held services. Their singing and shouts of Hallelujah! Hallelujah! led to locals calling the place Hallelujah Point.

Whoi Whoi, Chaythoos, Kanaka Ranch. Before there was a Stanley Park, there were villages on the peninsula. Stanley Park was by no means the pristine wilderness that we often imagine when it was designated as a park in 1888. 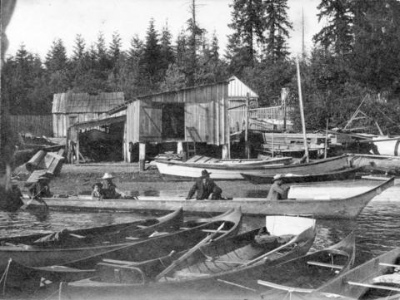 Life on the waterfront at the Brockton Point community in 1897. City of Vancouver Archives (CVA 371-2196)

Jean Barman has related this fascinating – and little known – tale in Stanley Park’s Secret, but she will also tell the story in person Sunday afternoon.

In Barman’s words, “Aboriginal people made use of the tongue of land we call Stanley Park for thousands of years.” By the mid-1800s, they lived at Whoi Whoi, now Lumberman’s Arch, and over towards Prospect Point at Chaythoos.

Settlers of European and Aboriginal descent built homes at Brockton Point and on Deadman’s Island, while Chinese workers lived near the current yacht club.

Hawaiians settled there too. Hundreds had sailed to BC to work in the fur trade, and many ended up working in the lumber mills ringing Burrard Inlet. Some settled down at Kanaka Ranch (Hawaiians were commonly known as Kanakas), on Coal Harbour, just outside the area designated as Stanley Park.

Forced out of the park 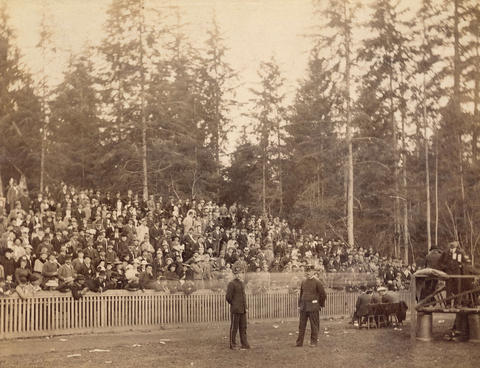 Over time, all these Aboriginal and mixed-race residents were forced out of their homes. Most were gone by 1930. The last resident, Tim Cummings, died at Brockton Point in 1958; his house was promptly destroyed.

August Jack Khatsahlano, who lived in Whoi Whoi, said there were 11 families living there in the early 1880s. But his family – and most of the others – left the park for the Musqueam and Squamish reserves after a road was built right through the community in 1888. The road was white because it was primarily composed of shells from the Whoi Whoi midden.
Barman quotes from Khatsalano’s conversation with Major J.S. Matthews, Vancouver’s first archivist:

“When they make Stanley Park road, we were eating [breakfast] in our house. Someone make noise outside; chop our house. We was inside the house when the surveyors came along, and they chop the corner of our house while we was eating inside.”

Pictures from the 1890s show how two cultures continued to coexist in Stanley Park. Barman says: “The dapper young and middle-aged gentlemen who idled away their leisure at Brockton Point [Athletic Grounds] and the singing Salvation Army picnickers could not have been more different in outlook and aspirations from the families who made their lives just a stone’s throw away. The residents’ simple accommodations harked back to an earlier era.”

Barman refers to some interesting church connections in the course of her tale.

One situation involves the legacy of Rev. Thomas Crosby, probably the best known missionary in BC history. She points out that the Methodists were among the first to preach in the Gastown area.

Barman quotes Cornelius Bryant, from a July 17, 1870 entry: “Our first congregation . . . was wholly composed of Indians who  . . . resided on the shore of the Narrows, a little to the west of Brockton Point . . .

“These Indians had been visited by Bro. Crosby and some of them had been savingly led to Christ and a class formed under a native leader . . .

“Although the hour was late, I [preached] to a full house through an interpreter; I had a time of gracious liberty as I knew the Word was being received with gladness, and wound up with an old-time fellowship meeting punctuated with amens and hallelujahs in the Squamish vernacular.”

An interesting thread ties Aboriginal and Hawaiian communities together with the Roman Catholic Church. 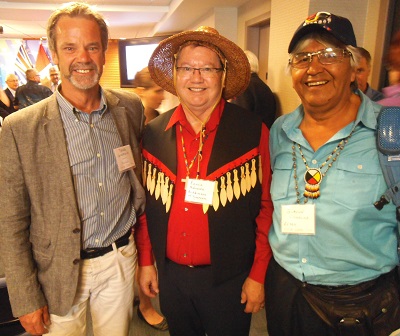 Rennie Nahanee, who is coordinator of First Nations ministry for the Roman Catholic Diocese of Vancouver, remembers both his Aboriginal and Hawaiian ancestry with pride.

Barman writes at length about the Nahanee family, pointing out that they were Hawaiians who intermarried with Squamish women.

She says that after being harassed out of Kanaka Ranch, the Nahanees lived in Moodyville and Mission Reserve, both just across the Burrard Inlet from Stanley Park on the North Shore.

“The Nahanee family re-created [there] the sense of community they had known at Kanaka Ranch,” according to Barman.

The family embraced Catholicism enthusiastically. Wiliam Nahanee – Rennie’s grandfather – and his seven children were baptised on Boxing Day 1910. The children were brought up in St. Paul’s Residential School on the reserve, which featured a typical colonial, paternalist education.

Nonetheless, Rennie is evidence that the faith has remained strong. While he has been keen to expose the failings of the residential school system, he also encourages reconciliation, especially through the upcoming Reconciliation Week events September 16 – 22.

And he ties his family history to his faith. In an email to me, he said: “William Nahanee was my grandfather . . . but he also was a part of Kanaka Ranch and sold two of his houses to pay for the steeples at St. Paul’s Church in North Vancouver’s Squamish Reserve. So yes, I am part of the Stanley Park family.”

Reclaim a place in history

Barman wrote that her purpose in writing Stanley Park’s Secret was “to reclaim a place in the history of Vancouver . . . for the forgotten families . . . Not only were families dispossessed, the memory of them was erased. Only when the sites are returned to our collective memory will Stanley Park belong to all of us.”

No doubt Barman will be continuing her quest in the park this weekend.

For keeners on the history of Stanley Park, the City of Vancouver Archives will have a display all weekend at the ‘Memory Lane at the Gardens’ zone.

You can see historical photographs, including the ones accompanying this article, and ask questions of 20 or so top local historians.

1 comment for “Stanley Park at 125: Faith, forgotten people, reclaiming a place in history”