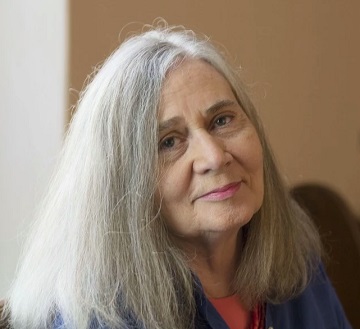 Marilynne Robinson will be in town next week to deliver Regent College’s Laing Lecture Series.

Following is an excerpt from Iwan Russell-Jones: “The Hidden Wound in Gilead,” from the current issue of Crux. Iwan Russell-Jones is the Eugene and Jan Peterson Associate Professor of Theology and the Arts at Regent College.

Gilead and Home revolve around the inter-related stories of two marginal and misunderstood characters – Grandfather John Ames and Jack Boughton. The first is the paternal grandfather of Rev. John Ames, a Congregationalist pastor who is the putative author of the memoir that comprises Gilead. The second is John Ames Boughton, or simply Jack, the namesake of Reverend Ames and the prodigal son of his best friend, Robert Boughton, a Presbyterian pastor.

Between them, and at different periods in the town’s history, Grandfather Ames and Jack Boughton are the bad conscience of Gilead. The question they ask and the challenge they pose is, effectively, the same: “What is left here in Gilead?” asks Grandfather; “What about this town?” asks Jack, “Could we live here?”[1] In essence they are both asking the ancient biblical question, “Is there no balm in Gilead?” (Jeremiah 8:22). . . .

Almost as an aside we learn from Ames that Grandfather’s departure [from Gilead] was also connected with “the fire at the Negro church.” “It wasn’t a big fire,” he says; “someone heaped brush against the back wall and put a match to it, and someone else saw the smoke and put the flames out with a shovel” (41). Every time that the fire is mentioned, in fact, Ames tries to play down its importance: “That was many years ago, when I was a boy. . . . There was very little damage” (195); it was just “a little nuisance fire” (264).

But despite his protestations, Ames cannot entirely conceal the significance of this event: Grandfather leaves Gilead because of it; Jack Boughton asks questions about it after hearing the story from members of that church who had moved away. Somehow or other, decades later, the fire is still relevant. When the Negro church finally closes and the remaining families move to Chicago, the pastor tells Ames that “they were sorry to leave, because the town had once meant a great deal to them” (42). It’s a gentle but damning indictment of Gilead.

James Cone’s powerful and moving book The Cross and the Lynching Tree helps to throw light on this episode in Robinson’s novels. Cone points out that from the late nineteenth century to the middle of the twentieth – the period in which these stories are largely set – white racial violence was commonplace in the United States and was by no means confined to the South: “White supremacy was and is an American reality. Whites lynched blacks in nearly every state. . . . Wherever blacks were present in significant numbers, the threat of being lynched was always real.”[2]

Lynching was the most potent symbol of white supremacy. During the lynching era, 1880 – 1940, nearly five thousand African Americans were made the victims of the most horrific white mob violence, and naturally it struck widespread terror in the hearts of African Americans, as it was intended to do: “The fear of lynching was so deep and widespread that most blacks were too scared even to talk publicly about it.”[3]

The lynchings were carried out with impunity by white “Christian” people in communities across the United States. Remarkably, as Cone points out, this drove many African Americans not to abandon the Christian faith but rather to embrace even more deeply the symbol at its very heart. In the cross of Jesus Christ they saw a God who himself had been lynched and identified with their suffering:

When black people were challenged by white supremacy, with the lynching tree staring down at them, where else could they turn for hope that their resistance would ultimately succeed? . . . Because of their experience of arbitrary violence, the cross was and is a redeeming and comforting image for many black Christians. If the God of Jesus’ cross is found among the least, the crucified people of the world, then God is also found among those lynched in American history.[4]

“The fire at the Negro church” in Gilead was started deliberately, and it represented and carried with it the threat of further violence. It was a statement of white supremacy. Grandfather Ames grasps its significance immediately. His vision of Jesus in chains represents his understanding of the Lord’s identification with the slave and the racially oppressed. It is Jesus carrying his cross and calling upon his people to join with him in liberative solidarity.

Grandfather knows that his vision is not shared by his son or his grandson or his fellow Christians in Gilead. In his view they have forgotten the town’s reason for being. And so he departs from the family home and the town where he ministered for so long, leaving only a note: “No good has come, no evil is ended. That is your peace. Without vision the people perish” (97). His words echo Jeremiah 8, the chapter that includes the biblical question at the heart of these novels. As far as Grandfather is concerned, Gilead has betrayed something – not just a cause but Christ himself and the people with whom he is most closely identified.

John Ames’s perspective on his grandfather and the fire at the black church is fascinating and revealing, bearing witness to Marilynne Robinson’s genius as a writer and the subtlety and complexity of her imagination. As far as the visions are concerned, Ames sides with his father against his grandfather:

I believe that the old man did indeed have far too narrow an idea of what a vision might be. He may, so to speak, have been too dazzled by the great light of his experience to realize that a great light shines on us all.[5]

Ames’s prose is itself dazzling and seductive at this point, suggesting, as so often in Gilead, that his is the voice of generosity, of wisdom, of insight, and of truth. But is it? His complaint appears to be that Grandfather’s vision is not universal enough, that it fails to do justice to the extraordinary range of human reality and experience.

In this it has a curiously contemporary ring to it, aligning Ames with those who object to the idea that “Black Lives Matter” on the grounds that “All Lives Matter.” It’s the particularity, the specificity, of Grandfather’s vision that Ames and Gilead can’t stomach, his insistence that Jesus has a bias to the oppressed and can only be encountered in solidarity with them.

When Grandfather leaves Gilead, Ames says, “We knew there was judgement in it” (112). At some level he and his family know exactly what Grandfather is trying to say to them. But it makes no difference. The same complacency and lack of concern are evident in Ames’s comments about the fire at the black church: it was only small, unimportant, nothing to worry about . . .

Back in 1970, in the midst of a tumultuous time when America was still coming to terms with the impact of the civil rights movement, Wendell Berry wrote a book called The Hidden Wound in which he reflected on the meaning of race in his own personal and family story, conscious as he was of being a Southerner whose forebears were slave-owners and who, right through the period of Jim Crow, segregation and lynching, owned a farm employing African Americans:

It occurs to me that, for a man whose life from the beginning has been conditioned by the lives of black people, I have had surprisingly little to say about them in my other writings. . . . For whatever reasons, good or bad, I have been unwilling until now to open in myself what I have known all along to be a wound – a historical wound, prepared centuries ago to come alive in me at my birth like a hereditary disease, and to be augmented and deepened by my life.[6]

Berry argues that while white people have certainly inflicted “the wound of racism” on black people, leading to enormous suffering, they have also deeply injured themselves in the process, psychologically, spiritually, socially and morally. And yet the more painful this wound has become, the greater effort they have made to conceal it:

This wound is in me, as complex in my flesh as blood and nerves. I have borne it all my life, with varying degrees of consciousness, but always carefully, always with the most delicate consideration for the pain I would feel if I were somehow forced to acknowledge it.[7]

Berry considers the strategies that have been used to avoid facing up to the pain of racism, including histories of the Confederacy and of the Civil War that present the issues in terms of gallantry and mediaeval chivalry, of “what we wish had been true” rather than the ugly reality.[8]

In the church itself, he argues, the great moral imperatives of Scripture have been eclipsed by an obsessive focus on salvation. “Far from curing the wound of racism, the white man’s Christianity has been its soothing bandage – a bandage masquerading as Sunday clothes, for the wearing of which one expects a certain moral credit.”[9] Berry suggests that in American history what all these various strategies of avoidance amount to is “the lack of a critical self-knowledge that would offer the hope of change.”[10] 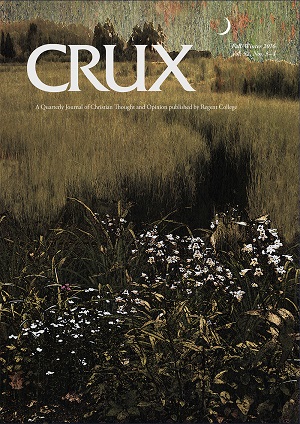 ‘Dusk 2015’ by Iowa-based visual artist Sara Slee Brown is the image on the cover of Crux.

The Rev. John Ames, writing ostensibly in 1956, just as the civil rights movement is beginning to gather momentum, demonstrates until almost the very end of Robinson’s novel the absence of such critical self-awareness, a blindness to the truth of what he and the people of Gilead have done.

The fire at the black church highlights Ames’s inability to face up to the reality of his society and the demands of his faith. He carries on as though nothing of social or political or religious importance has taken place. His refusal to grasp the significance of the fire indicates a moral and theological failure of the highest order.