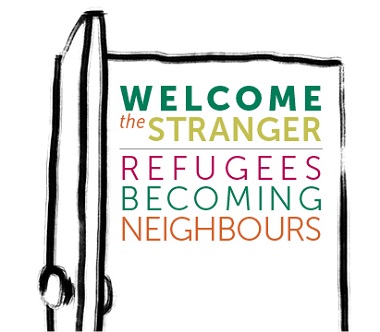 Journey Home Community has been a leader in welcoming refugees to Metro Vancouver over the past decade or so (see here, here and here).

Its commitment has again been made clear in a recent letter of concern to the Liberal government and through its ongoing local efforts to connect refugees with supportive networks.

James Grunau, executive director of Journey Home, wrote the following email to Hon. Ahmed Hussen, Canada’s Minister of Citizenship and Immigration January 31, which he says gives a sense of where Journey Home is coming from.

I am writing to you as a Canadian and constituent of Burnaby South, British Columbia who is gravely concerned, saddened and frightened by the recent events in the United States, including most recently the Executive Order signed by President Trump on January 27, 2017 concerning the admissibility of persons from Iran, Iraq, Somalia, Sudan, Syria, Yemen and Libya.

This does not reflect Canadian values and is contrary to the international obligations which both the USA and Canada are signatories to. I have many refugee friends so this matter is of extreme importance to me. I would like you to know that it matters very much to me that you take a decisive stand against this discriminatory and irresponsible act. Specifically, I ask you to:

1. Review and remove the designation of the United States as a “safe third country” under the Safe Third Country Agreement on the basis that the Executive Order violates the non-discrimination provision of the 1951 Convention on the Status of Refugees (Article 3); and

2. Take immediate steps to offer refugee protection to those refugees already screened and cleared for admission to the United States, who are no longer able to be resettled there, including by raising the levels of overseas refugees admissible into Canada in 2017 to the extent necessary.

I believe that our national and individual characters are being tested by recent events. I hope sincerely that you will act with courage and conviction, knowing that the citizens and residents you serve are relying on you to carry us through these difficult times without compromising Canada’s identity as a nation that values diversity, equality and protection.

Developing a culture of welcome 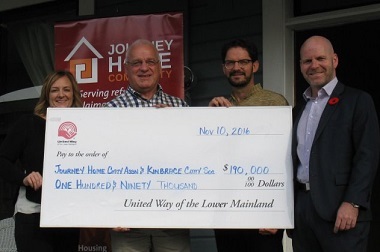 The United Way is generously supporting both Journey Home and Kinbrace through its ‘Developing a Culture of Welcome’ program. James Grunau is second from left, Loren Balisky of Kinbrace is beside him.

In partnership with Kinbrace Refugee Housing and Support, and funded by the United Way’s ‘Developing a Culture of Welcome’ program, Journey Home’s ‘Refugee Claimant Sponsorship Program’ is seeking partners who will walk beside refugee families who are already in Canada.

Journey Home points out that there is no need to wait on government approval for sponsorship applications because refugee claimants (asylum seekers) are not supported by government or private sponsors.

Multiple world crises have forcibly displaced refugees at an alarming rates. Some travel to Canada on their own and ask for asylum at an immigration office. Having suffered trauma and persecution in the course of being forced to flee from their home countries, they are often disconnected from supportive groups and may not be eligible for settlement programming.

To inquire about partnering with Journey Home, call 604.568.4892 or email brad@journeyhomecommunity.ca.

← Russell Stendal has been through the wars in Colombia
Around Town: Multiply 2017, Corleone, Beth Moore, Dunbar Ryerson United . . . →