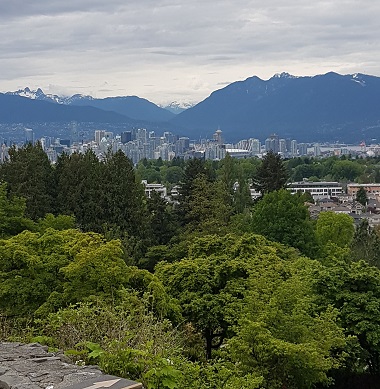 Local Christians are inviting anyone who would like to pray for our city to join them as they participate in Thy Kingdom Come, a worldwide movement of prayer. (See video below of the Archbishop of Canterbury Justin Welby and Pope Francis blessing Thy Kingdom Come.)

Members of 24-7 Prayer Vancouver already pray regularly for our community, but will meet May 30 (Ascension Day) at Queen Elizabeth Park.

As part of the cross-Canada Thy Kingdom Come prayer movement, 24-7 Prayer Canada, along with Alpha Canada, The International Association for Refugees, International Justice Mission and Direction Chrétienne are encouraging churches to unite between Ascension and Pentecost to pray for the wounds of their cities; for the wounds of the nations; and for people who have not yet received Jesus as Lord.

Christians in Vancouver are invited to gather for prayer May 30, Ascension Day, at Queen Elizabeth Park. We will meet at 7 pm at The Holy Name of Jesus Catholic Church (33rd and Cambie) and then make our way to the top of Little Mountain (only a 10 minute walk – we counted!) to pray at five different stations overlooking the city.

Queen Elizabeth Park rests on the traditional, unceded territory of the Musqueam, Squamish and Tsleil-Waututh people. The peak known as Little Mountain is the result of volcanic activity millions of years ago. It now forms the geographic centre and highest point of Vancouver. It was an old-growth forest before European settlement, the home of grey wolves, bears, elk and salmon creeks.

By the end of the 19th century the forest was logged, the animals were gone, and the salmon runs paved over. At the turn of the 20th century rocks were quarried from the mountain to build Vancouver’s first roads in Gastown. By the 1920s this high point was being used as a water reservoir for Vancouver, and it is still one of the largest in the nation.

Queen Elizabeth Park is known as a place of deep beauty and serenity, a sanctuary, hosting gardens, trees, exotic birds, slopes to sled down in the winter, trails to hike and a fountain to splash in. It is the second-most visited park in Vancouver after Stanley Park, but there is still space within it for solitude and peace.

The park offers north, south, east and west views of the Vancouver Regional District and even Vancouver Island. It is a central peak from which we can see and pray for a city that God loves and weeps over. A city that is home to many nations, tribes and tongues, and is the desired destination for many more from around the world. A city with vast wealth and terrible poverty. A city known as the “City of Glass,” “the Youngest City in the World” and “The Saddest City in North America.”

A city that longs for the sons and daughters of the King to be revealed in their love, compassion, truth and unity.

For some background on 24-7 Prayer Vancouver go here and for the worldwide significance of Thy Kingdom Come go here. Here is a portion of the description from the British site, where the movement began:

Join the global wave of prayer calling all Christians to pray between Ascension and Pentecost for more people to come to know Jesus Christ. May 30th – June 9th 2019

Thy Kingdom Come is a global prayer movement that invites Christians around the world to pray for more people to come to know Jesus. What started in 2016 as an invitation from the Archbishops of Canterbury and York to the Church of England has grown into an international and ecumenical call to prayer.

The Anglican Diocese of New Westminster is encouraging participation.