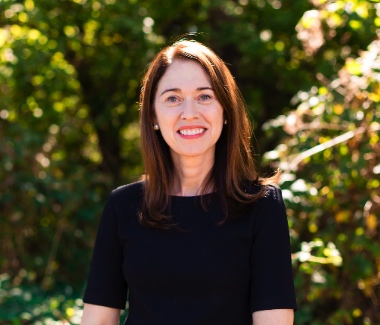 TWU professor Allyson Jule is having a good year. She is on sabbatical in Oxford, she took over as president of the Women’s and Gender Studies et Recherches Feministes in May and she was named one of Canada’s top 10 professors for 2016.

Allyson Jule is on the phone via FaceTime Audio giving her listener an account of the pageantry of learning on display at the University of Oxford in England. Jule, professor of education and co-director of Trinity Western University’s Gender Studies Institute, is at Oxford on sabbatical this year.

“It’s like Disneyland for academics,” she says of her collegiate home-away-from-home. “It’s one joy after another here!” Jule is currently Visiting Research Fellow at Oxford’s International Gender Studies Centre at Lady Margaret Hall.

Particularly impressive is the university’s ancient Bodleian Library. Established in 1602, it’s one of Europe’s oldest, and second in size only to the British Library.

“The library blows my mind,” Jule says with unabashed enthusiasm. “Every book ever published in England is in there.” And because the library operates on a closed-stacks system, books stay on-premises. “You can order any book you want from the library catalogue and it’ll always be available!”

This has been a stellar year for the Christian educator and feminist.

Jule took over as president of the Women’s and Gender Studies et Recherches Feministes in May for a two-year term. Although non-sectarian, the national organization voted unanimously to elect Jule – with full knowledge of her faith background and employer.

“They feel scholarship in this area is always enhanced by more diverse opinions,” she says.

As if that weren’t affirmation enough of her contributions to the field, she was also named one of Canada’s top 10 professors for 2016, for which she has received a prestigious 3M Teaching Fellowship. She is the first TWU professor to receive that honour.

“I’m thrilled,” she says of her win, “because I consider myself a teacher first.” (It was one of Jule’s students who first texted her in Oxford about her win.) Along with her contribution to gender studies, Jule was recognized for bringing education students on study trips to Cameroon (which she visited again this summer), where they learn what it takes to teach in remote villages without any electricity or running water and very few resources.

Clearly, the celebrated professor has her pick of institutions. But she has chosen to share her gifts and skills, along with her passion for exploring gender issues from a faith perspective, at Trinity Western University (TWU).

“TWU is a dynamic place to be doing gender work,” she says. “The Gender Studies program at TWU is committed to serious scholarship.”

Jule joined the TWU faculty in 2008, and was approached by her colleagues with the idea of developing a Gender Studies Institute, which she now co-directs. She has also developed Canada’s only three-credit undergraduate course in Gender in Education.

“The campus community was more than ready to talk about complex issues,” she recalls. “To not have a place to talk about them at TWU would have been a deficiency.” The board of governors at the time agreed and unanimously passed the proposal.

TWU’s Gender Studies Institute has been developed “as a space where issues of gender from a variety of perspectives can be openly discussed and explored and to create sophisticated sensitivity to the issues of today.”

On a topic that has sometimes generated more heat than light in the public forum, Jule has been a strong supporter of open and honest dialogue, of speaking up when it counts, and of not letting hot-button topics derail efforts at collaboration where there are shared values.

She sees many opportunities for feminist and faith communities to not only learn from each other, but to work together to benefit society on topics such as domestic violence and child pornography. 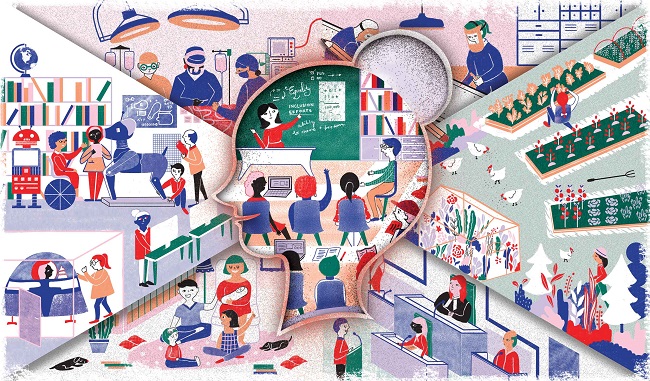 This artwork by Vania Musa accompanied the article in Trinity Western magazine.

“The way things are portrayed now, it looks like feminism emerged almost as a reaction to oppression within Christianity,” she says, calling this view a kind of “societal amnesia.”

The fact is that early feminists strove for change on the basis of what they read in scripture. “The way Christ honoured women was counter-cultural in that day,” explains Jule. “He did nothing to degrade women. The love in the Christian faith is unique in the world, and I want to protect that [knowledge] and see Christians as a force for reconciliation of all kinds.

“If Christians see feminism as anti-Christian, and feminists see Christianity as anti-feminist, that undermines the possibility of working together over shared values.”

Asked how faith can inform feminist scholarship, Jule says the feminist community at large should acknowledge the movement’s Christian origins. The love of mercy and justice, in particular, are principles that have emerged from the Christian faith. “Feminism has picked up on them, but this is what the gospel is about.”

Among Christians, Jule observes there’s a lack of understanding that feminism pre-dates the Women’s Lib movement of the 1960s. Instead, it goes “way back” into Christian thought. “The intention to have women as full partners in God’s family has been a part of our faith for millennia,” she says. “Feminism enhances the Christian values of freedom and justice.”

Plus, there is a vast diversity of thought within feminism itself. According to Jule – who defines feminism as the advocacy of women’s rights on the grounds of political, social and economic equality to men – liberal feminism watches and comments on society’s portrayal of women; socialist feminism looks at patriarchy and social class issues of dominance and power; and radical feminism focuses on male dominance and the rise of women.

Characterizing herself as a liberal feminist, Jule’s concerns are with political, social and economic realities – particularly how communities of faith are heavily impacted by culture. “As were the New Testament churches,” she notes.

Pressed for her stance on topics such as abortion, women priests, family headship and – the most molten of hot topics these days – gender parity and gender identity issues, the professor would only say that as a Christian educator and feminist, she has a clear purpose.

“I imagine and work towards a world where restrictions on women’s lives are done away with and women are able to use their gifts as God’s given them.”

Asked to elaborate, she adds, “It breaks my heart that the painful issues within the church for some people have revolved around gender and sexuality. I think there are much larger issues that the Christian church has to focus on, including poverty and world hunger.

“Christian attitudes should bring about the full flourishing of every member of God’s family, and that includes women.”

This article is re-posted from Trinity Western magazine (Issue 27) by permission.

Earlier this year Kirk LaPointe of Roundhouse Radio 98.3 interviewed Allyson Jule while she was in Oxford.