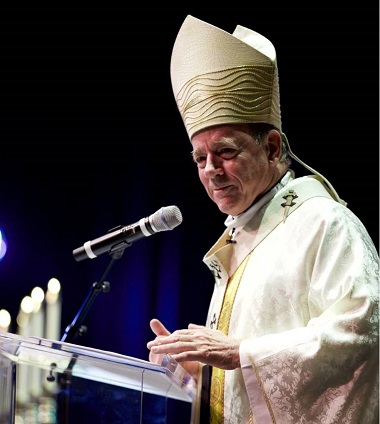 Archbishop Michael Miller spoke with Matt Galloway of The Current.

A June 8 Leger poll indicates that “66 percent of Canadians think the Church should bear the responsibility for the tragedies committed at residential schools, while 34 percent think the Government of Canada should be held responsible.”

Local Roman Catholic leaders agree their church should take responsibility, but are trying to make it clear that they have already been working on that.

Paul Schratz, editor of The B.C. Catholic, commented June 6 that the “Catholic Church has its work cut out for it in taking steps to bridge the gulf between Church and First Nations.”

The gulf has been narrowing, he said, “thanks to efforts to build trust and take action.”

But recent revelations about the remains of 215 bodies being found on the site of the former Kamloops Indian Residential School are making that work more difficult.

Suffice to say, the historical reality of the Catholic Church’s involvement in the Residential School system is bad and the Church needs to accept that it needs to listen and keep apologizing. . . .

What should be mentioned at this time, however, is that it’s incorrect to say the Church has not accepted any responsibility for its role in the Residential School system established by the federal government.

Whether the Church’s response has been adequate is subject for debate, but not the fact that apologies have been offered.

It’s important that people who are at risk of being scandalized by the Church response know that Catholic leaders have confessed the sins of the past and asked forgiveness for them.

The Roman Catholic Church ran the majority of residential schools and has faced considerable criticism in the media. Archbishop Michael Miller of the Archdiocese of Vancouver offered an eloquent explanation of why he has apologized and why Pope Francis has not (thus far at least), during a lengthy July 8 interview with Matt Galloway on CBC Radio’s The Current.

Following is a portion of the interview.

Matt Galloway: Archbishop Michael Miller did apologize in a statement last week. He’s head of the Archdiocese of Vancouver. And Kamloops was in the historical boundaries of that archdiocese. . . . Why did you feel it was important to make that apology?

Archbishop Michael Miller: Oh, I think it was important to make the apology because it was so shocking, so saddening, so distressing. I think it’s my obligation to express apology, sorrow and regret at the revelation of yet another painful situation that has hit us in the face. I think apologies are a necessary part of reconciliation and they get their weight if they’re accompanied by actions.

MG: What are you actually apologizing for?

AMM: I think for many things. One, of course, is that the bodies of the children were unmarked, that their names are not memorialized or remembered, that it would have been very painful for the families, that their remains were not returned to them or honoured in the way that the families would want.

But it’s also part of a larger picture. I think it reveals to us the error of a colonialist policy to which the church was a contributor, an implementor, in which the dignity and the reverence for Indigenous culture, language and so on was not fully respected.

There was, you know, cultural abuse. We know there was physical abuse and on occasion, sexual abuse. And so there was certainly a good deal to apologize for.

MG: As you mentioned, the Catholic Church was an implementer in all of that. Why do you think the Pope did not apologize?

AMM: I think on this occasion it wouldn’t have been appropriate for him, I don’t think, to apologize from the balcony at a Sunday Angelus. I’m hoping that the Pope will, in fact, some day deliver apology in person to Indigenous leaders who will accept the apology. After the Angelus, traditionally on Sunday, the Pope offers a comment on situations around the world. He did that. He expressed his sadness. But I think a papal apology is a far more formal event in which people are present. . . .

MG: In the absence of an apology from the pope, what do you think the message is to survivors of residential schools and the families of those who went?

AMM: I hope that they see that the that there are apologies offered by those who are nearest to the situation, which was the responsibility of the Archdiocese of Vancouver until 1946, Likewise, afterwards, the Diocese of Kamloops, the religious communities – that these were the people, we were the people on the ground. And I would hope that our apology is seen as as a closeness.

Of course, the Holy Father speaks a voice for the entire church. But I also think that apologies offered by the people who have been closest to the situation, they’re heartfelt and sincere. Although it might not be enough, I hope that they are at least accepted as gestures of goodwill and of closeness.

MG: Do you want to hear an apology from Pope Francis?

AMM: If someone asked me, do I think the pope should apologize, I would say yes to that question. . . .

AMM: I think true reconciliation will be when we can be with one another, remembering our painful past, certainly from my point of view, and are able to to move ahead in common projects, looking to the future, knowing that there are painful memories, that even forgiveness in a certain sense plays a part of that. Reconciliation will be when when together we can move forward without rancour, with true repentance, with mercy.

That to me, would be a setting for for reconciliation, never forgetting. I don’t believe we can erase or forget the past, but we must also think that we can move to a future, that we’re not simply chained to the past. The past conditions us, but it doesn’t determine us.

Go here for the full interview, which begins at 22:34 (and is available in transcript form). Matt Galloway mentioned at the beginning of the interview that Archbishop Miller is awaiting throat surgery. He sounded hoarse – and no doubt would appreciate prayer. 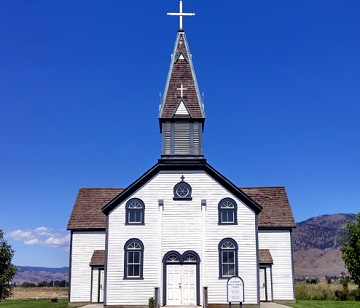 St. Joseph’s Church, built by Catholic missionaries and the Tk̓emlúps te Secwépemc in the late 19th century, is the oldest church in Kamloops.

A recent attack on the historic St. Joseph’s Church on Tk̓emlúps te Secwépemc land indicates both the anger and the ongoing desire for reconciliation surrounding Indigenous / Catholic relations.

A June 8 BC Catholic article stated:

The vandalism follows the discovery of Indigenous children’s graves at a nearby Church-run Residential School.

“We are deeply disturbed to learn that the Saint Joseph’s church was vandalized. The church was built from the ground up by Tk̓emlúps te Secwépemc members. We understand the many emotions connected to a Roman Catholic run Residential School. At the same time, we respect the choices that Tk̓emlúps te Secwépemc ancestors made, over a 100 years ago, to erect this church,” read a May 31 statement from Rosanne Casimir, the band’s chief. . . .

St. Joseph’s, a mission church, is the oldest church in Kamloops and a heritage site. Mass is offered once a month on first Sundays.