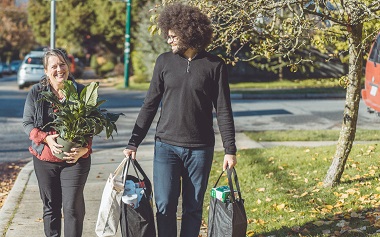 The Vancouver Foundation has just released its follow-up to the influential 2012 ‘Connections and Engagement’ report.

Last week the Vancouver Foundation released a much-anticipated update to its landmark 2012 Connections and Engagement report on loneliness and community life in Metro Vancouver. This update, like the original report, provides hard evidence for trends most of us know intuitively, even as it yields a number of surprises – some pleasant, some truly alarming. It concludes with a call to action that echoes the highest priority named by pastors at last year’s Vancouver City Summit.

Perhaps no other social planning report has had an impact as big and durable as the 2012 Connections and Engagement report, in terms of re-aligning priorities within the local non-profit sector and stimulating public discussion of what it means to flourish in our fast-changing cosmopolis. It continues to be the only such report (out of many) that I hear pastors mention.

It is worth remembering that the 2012 Survey and Report came about because of a shocking response to a question posed the year before to 275 charities and 100 community leaders. When asked what crisis concerned them the most, they didn’t mention poverty or homelessness or some other headlining social ill.

They named instead a growing sense of isolation and disconnection. Chronic loneliness is a key “social determinant” of health, cutting years from normal life expectancy. Moreover, without robust civic engagement no society can long withstand the innumerable cross-pressures of 21st century urban realities, let alone thrive creatively in them.

So five years later, the Vancouver Foundation has checked to see if anything has changed regarding key themes from 2012, but has also looked closer at the barriers and opportunities people identify as well as at ways to catalyze action for healthy neighbouring and a revitalized commons.

The 2017 Connect & Engage Report is pithy yet brief and highly readable, with numerous infographics. I encourage you to download or interact with it (and the 2012 Report) here.

Before I quote the key findings and highlight some elements suggestive for Christian mission, here is a note on the report’s methodology:

The survey was administered by Mustel Group and completed online in either English or Chinese by 3,785 Metro Vancouver residents between June 15th and July 7th 2017. The final sample was weighted to match Statistics Canada census data on the basis of gender, age and region of residence. . . . Focus groups were also conducted post-survey to provide a deeper understanding of the themes and issues highlighted by our survey findings.

The report goes on to detail its results under the same three headings as in 2012. 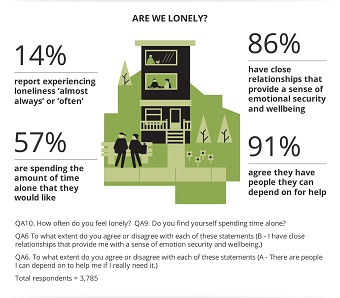 Perhaps the most surprising good news under this heading is the fact that, counter to what we might expect, older residents reported the lowest levels of loneliness and spending too much time alone, and they find it easier to make new friends. Looking for a friend? New to the building or the block? Knock on the door of your elderly neighbour!

We as congregations and individuals might not be able to do much about our lonely neighbours’ lack of time, but surely we can assist in the other ways they think will make it easier for them to make new friends: we can be approachable and friendly, discover what low-cost interests we have in common and do them together in community or common spaces. Maybe a walk around Stanley Park, followed by a movie night at the church? 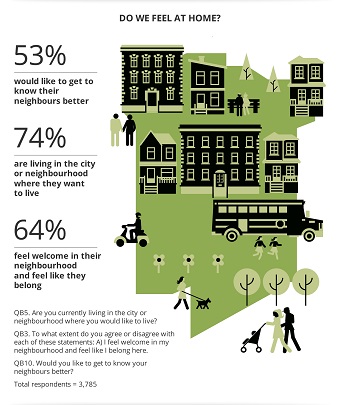 Some of the good news is that 74% of respondents are living in the city or neighbourhood they want to. Most talk to their neighbours regularly and know at least three well enough to ask them for help. More people trust their neighbours than did in 2012.

On the other hand, the proportion of residents saying they feel welcome in the neighbourhood and a sense of belonging has slipped 4 points from 2012, down to 64%. Only slightly more than half say they want to get to know their neighbours better. Maybe that’s because just 49% expect to still be living there in five years.

Once again, older residents report a stronger sense of feeling welcome and belonging, rising to a high of 84% among those age 75 and older! How do we release this wealth of community feeling onto the younger age groups?

. . . Because that sense of welcome and belonging declines through the progressively younger cohorts, until it hits 46% among 18 to 24 year olds. It’s hard to feel you belong when you don’t have a neighbour you can call on for help. One in five respondents don’t. The proportion is higher still for renters (33%), young adults (34-36%) and students (38%).

The report lists the 10 most preferred methods of getting to know neighbours, and promises in future to make it possible to parse these out by age and other demographics. A teaser: young adults age 18 – 24 prefer neighbourhood social gatherings, while recent immigrants prefer community events and festivals or projects. 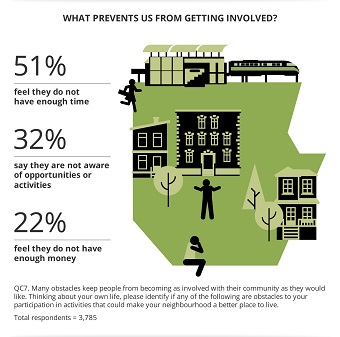 The news here is not good at all. The best that can be said is that rates of volunteering have held nearly steady (45% compared to 48% in 2012). But the plain truth is that people are less involved in community-related activities than they were five years ago, in many cases by a wide margin. Even use of local libraries and recreation centres is down to 58% from 83%.

Perhaps the single most alarming statistics in entire report indicates that, among survey respondents, attendance at religious services has dropped from by half, from 40% to 22%. This begs for corroboration and further analysis. The most recent population-wide religion data was taken in the 2011 National Household Survey; we’ll have to wait until the 2021 Census to get more through Statistics Canada.

Two other data points bear mentioning. First, 50% of people living in an apartment or condo do not have a common area in which to socialize with neighbours. Churches would do well to take on this function, starting with congregants who live nearby being recruited and supported to initiate events and activities that have no other immediate goal than promoting neighbourliness.

Second, since 2012, the main obstacle to community participation that people identify has shifted from “not having anything to offer” to “not having enough time.” The lack of time has echoed in various ways throughout the report.

We heard the same thing loud and clear from pastors, about their parishioners lives and their own, during the Vancouver Consultation last year. Collectively, we named the need to recover practices of Sabbath – practices which are as much economic as they are rhythms of rest. Indeed they must be. I am personally convinced that communal Sabbath is the key to effective discipleship in the face of our societal (and ecclesiastical) idols. 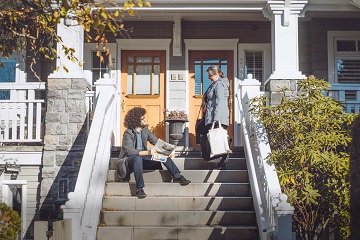 The Vancouver Foundation concludes with several calls to action, all of which brilliantly align with what the church ought to be on about. For instance, they are planning a new initiative to invite people from all walks of life to share a meal and talk about what really matters in their community. Sounds like the Gospel of Luke.

They also enjoin every one of us as well as organizations of every description to engage in conversation, ask questions, to listen well. That act of convening neighbours and groups to mediate careful dialogue that yields trust, confidence and experimentation toward the shalom of our city – that is what sifted out as the number one priority at the conclusion of the Vancouver Consultation last year. Who’s up for it?