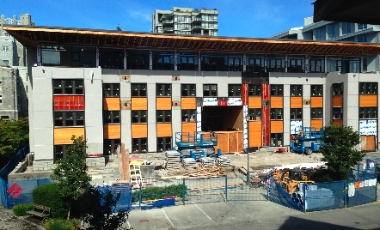 Vancouver School of Theology will be moving into this newly renovated building next month. Photo by Shari Coltart.

Less than a year after selling its centrepiece gothic-towered Iona Building to the University of British Columbia, Vancouver School of Theology (VST) is ready to move its operation into a newly-restructured building nearby.

That move, together with the confirmation of several new faculty members, marks a multi-faceted new era.

VST principal Richard Topping said this week that the school is looking forward to “receiving an occupancy permit, prior to moving from its temporary home in St. Andrew’s Hall” into the newly reconstructed quarters in August.

The facade of the building. Photo by Shannon Lythgoe.

The reconstruction involves converting a student residence into the VST operations facility which will house the school’s faculty and administrative offices, classrooms, meeting rooms and a library. As of this week, said Topping, the upper floor carpets are installed, the lighting is in and the stonework is finished on the outside.

He added that “St. Mark’s College will have facilities in the new quarters and University Hill United Church will meet there as well.”

VST communications director Shannon Lythgoe explained that the reconstructed facility is about 25,000 square feet, about one-quarter the size of the Iona building. But she added that it will work well for current and future models for theological education. 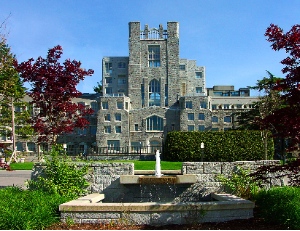 The Iona Building was sold last year to the Vancouver School of Economics.

“In Iona, whole wings were rented out to various non-VST entities, mostly related to UBC. But, for example, distance education is thriving and the building renovations serve that well. Every classroom is wired in real-time and for modal purposes,” Lythgoe added. Even though VST has a growing off-campus student body, she noted, there are many fewer students around the campus than there had been in earlier, more traditional models.

VST was founded in 1971 as a partnership between Union College and Anglican Theological College. Both founding partners traced their schools to earlier in the 20th century. Union was the United Church seminary.

A few years later, St. Andrew’s Hall, affiliated with the Presbyterian Church in Canada, joined the partnership. And a working relationship with St. Mark’s (Catholic) College continues. As well, a congenial rapport with the other theological entities at UBC – Carey Centre (Baptist) and Regent College (transdenominational) – prevails.

Meanwhile, the new faculty members represent VST’s eclectic approach to theological education. Three who have been featured on the VST site enunciate evangelical, First Nations, inter-religious, homiletics and hermeneutical studies and emphases. They are:

← Faith Today’s interview with Regent College president Jeffrey Greenman
Meta Communities: When God evicts you from one house, he opens another →