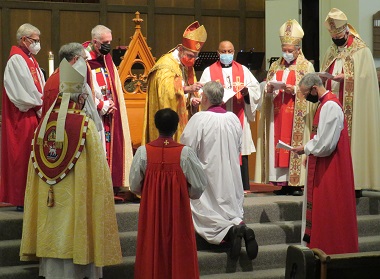 Daniel Gifford with the Bishops following the ‘Exhortation and Examination’ and before the laying on of hands.

A Vancouver pastor slated to be the next leader of the Anglican Network in Canada (ANiC) was consecrated as coadjutor Bishop Sunday afternoon (February 6) at the Church of the Good Shepherd.

The Venerable Daniel Gifford, who has served as Vicar at St. John’s Vancouver for the past 24 years, had already been elected to that role at the Diocesan Synod November 18, 2021.

The current ANiC Bishop, The Right Reverend Charlie Masters, said in a video several days before the consecration service:

This is a very big deal for us as a diocese. We are going to be entering into a service in which the Primate [The Most Rev. Foley Beach, Archbishop and Primate of the Anglican Church in North America] will be leading us for the ordination and consecration of Daniel Gifford to become a coadjutor Bishop and ultimately the the diocesan Bishop, my successor, to lead us as a diocese.

The consecration was a colourful affair, with many fully robed priests and several bishops from around North America up front, accompanied by a choir and the Vancouver Symphony Orchestra Brass Quintet, leading the way through a two-hour service of liturgy and hymns. The late afternoon sun streaming in the church windows added to the atmosphere, which is recorded on YouTube.

Gifford, who was accompanied by his wife Cathryn and two sons, Alexander and Nicholas, graduated from Wycliffe College Toronto and served at two churches on the Sunshine Coast before joining St. John’s. 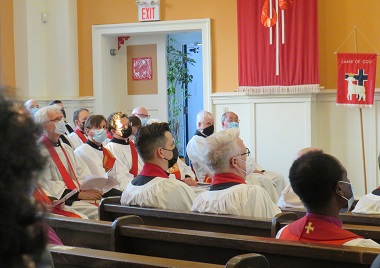 ANiC clergy at the consecration service.

ANiC is part of ACNA; here is how they describe the two bodies and their relationship:

The Anglican Network in Canada (ANiC) is a continent-wide family of churches which, like the majority of Anglicans worldwide, remain faithful to established Christian doctrine and Anglican practice.

We are a diocese in the Anglican Church in North America [ACNA] and part of the global Gafcon movement which represents approximately 70 of the 90 million Anglicans worldwide.

Members of ANiC are committed to remaining faithful to Holy Scripture and established Anglican doctrine and practices (read more about Anglicanism here). ANiC emerged out of the ‘Essentials’ movement in the Anglican Church of Canada. 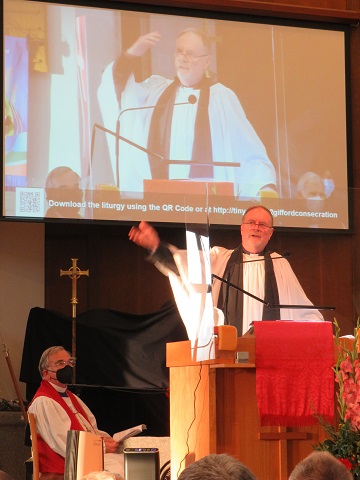 Rector David Short delivered the sermon; he and Dan Gifford have worked together at St. John’s Vancouver for 24 years.

Rector David Short of St. John’s Vancouver spoke warmly of his long working relationship with Gifford (joking that “I have all the dirt on Dan Gifford, and I’m happy to sell it to the highest bidder.”)

He began his sermon by saying, “Everyone who is involved in the realigning of the Anglican church will have a deep interest in what is going on today, here.”

A brand new book on the ANiC movement, for sale downstairs following the consecration service, offers a sense of what Short was alluding to.

The Anglican Network in Canada: Protest, Providence and Promise in Global Anglican Realignment looks at where ANiC comes from, its place in the Anglican world and its prospects.

Here is how the publishers describe the book:

In 2002, representatives from 14 parishes in the Diocese of New Westminster in British Columbia rose from their seats and walked out of synod, sparking a Canada-wide movement that would reshape Anglicanism throughout North America and the global Anglican Communion.

The Anglican Network in Canada places the struggle and sacrifice of those early years in wider context. Long before the walkout, renewal movements such as Essentials sought to recover the vibrancy of historic biblical faith. 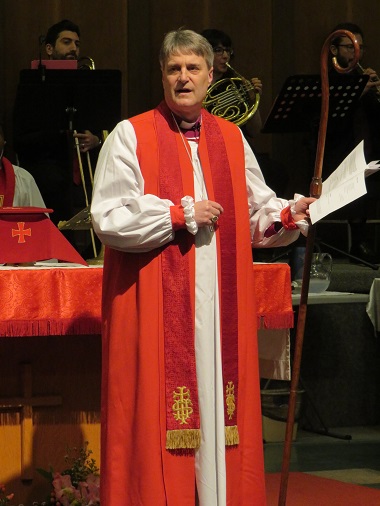 When these efforts failed to halt the establishment of revisionist teaching and practice within the Anglican Church of Canada, many congregations could not remain within the ACC, at great personal and institutional cost.

The growing and increasingly influential Anglican Church in the Global South sustained the departing congregations with their solidarity and episcopal protection in a time of deep trial, and made possible the establishment of the Anglican Network in Canada.

With winsome memoirs and inside history from key players, including an address from Dr. J.I. Packer appearing in print for the first time, The Anglican Network in Canada is essential reading for Anglicans, church historians and anyone interested in the future of orthodox Christianity. 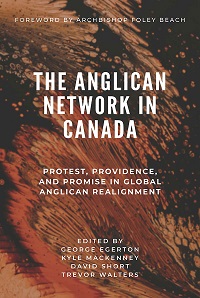 Following their departure from the Anglican Diocese of New Westminster, four ‘breakaway’ churches – St. John’s, Church of the Good Shepherd, St. Matthias & St. Luke Church (all in Vancouver) and St. Matthew’s Church (Abbotsford) lost a legal challenge in which they attempted to retain their buildings.

The Supreme Court of Canada said Thursday it will not hear a last-ditch appeal from four dissident conservative Anglican churches in Vancouver that hoped to hold on to their buildings and land. . . .

In November, the British Columbia Court of Appeal, the highest court in the province, ruled that the properties are owned by the Diocese of New Westminster, which is part of the Anglican Church of Canada. The four churches are valued at about $20-million. Their congregations have broken with the mainstream church over same-sex marriage and other issues. . . . 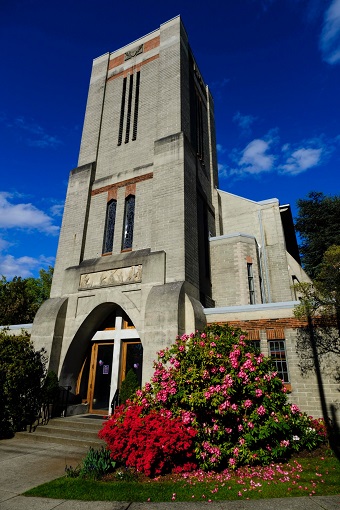 The church left behind by the St. John’s Vancouver congregation.

One of the four parishes includes St. John’s Shaughnessy Church, one of the largest Anglican congregations in Canada. [Cheryl Chang, special counsel to the ANiC] said it will be very difficult for St. John’s to find a suitable building large enough to hold the nearly 1,000 parishioners who worship there every Sunday. . . .

Bishop Michael Ingham, the head of the diocese, said in a release Thursday that no parishioner would be forced out.

“No member of any congregation in this Diocese need leave the buildings in which they worship,” he said. “However, the clergy who have left the Anglican Church of Canada must now leave their pulpits. I will work with these congregations to find suitable and mutually acceptable leaders, so that the mission of the Church may continue in these places.”

The great majority of members of the four churches left their church buildings and joined ANiC. A legal twist (dealt with in The Anglican Network in Canada) meant that the Church of the Good Shepherd was able to retain its property. No doubt that unique circumstance occurred to many during the consecration service.

St. John’s Vancouver has been welcomed to share Oakridge Adventist Church, though it has continued to look for a new home. The Anglican Diocese of New Westminster offices have been moved into St. John’s former hall, sharing the property on Granville Street at Nanton Avenue with the continuing St. John’s Anglican Church, Shaughnessy.

The Diocese of New Westminster has 66 parishes and three ’emerging faith communities,’ while the ANiC now has 16 churches in the same area. 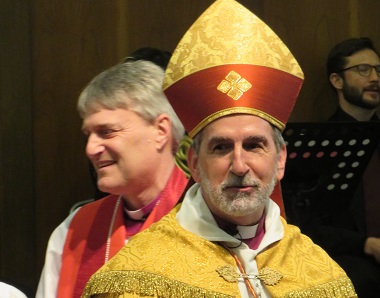 Foley Beach is Chairman of the Primates Council of Gafcon; Daniel Gifford is behind him at the consecration.

The ANiC has strong connections with the international Anglican movement, though there is an ongoing debate about the proper place of ANiC/ACNA.

They are part of Gafcon (Global Anglican Future Conference), which claims to represent the majority of Christians in the worldwide Anglican Communion.

Foley Beach, who officiated at Daniel Gifford’s consecration, is Chairman of the Primates Council of Gafcon.

Gafcon describes its movement as:

. . . a global family of authentic Anglicans standing together to retain and restore the Bible to the heart of the Anglican Communion. Our mission is to guard the unchanging, transforming Gospel of Jesus Christ and to proclaim Him to the world. We are founded on the Bible, bound together by the Jerusalem Statement and Declaration of 2008, and led by a Primates Council, which represents the majority of the world’s Anglicans.

Gafcon works to guard and proclaim the unchanging, transforming Gospel through biblically faithful preaching and teaching which frees our churches to make disciples by clear and certain witness to Jesus Christ in all the world.

The Gafcon journey began in 2008 when moral compromise, doctrinal error and the collapse of biblical witness in parts of the Anglican communion had reached such a level that the leaders of the majority of the world’s Anglicans felt it was necessary to take a united stand for truth. A crowd of more than 1,000 witnesses, including Primates, Archbishops, Bishops, clergy and lay leaders gathered in Jerusalem for the Global Anglican Future Conference (GAFCON).

There are some 85 million Christians in the worldwide Anglican Communion spread across 40 regional churches, known as Provinces. Gafcon is a global movement within the Communion which represents the majority of all Anglicans.

Each Anglican Province is led by a Primate (Archbishop), nine of whom are active supporters of Gafcon.

Gafcon is particularly strong in Arica, which is now home to the largest number of Anglicans.

The upcoming Lambeth Conference 2022 (July 26 – August 8) will provide insight into the sometimes testy relationship between Gafcon and the leadership of the Anglican Communion. Lambeth gathers bishops from all over the Anglican Communion roughly once every 10 years. Some Gafcon bishops had refused to attend the event in 2020, before it was delayed because of COVID-19.