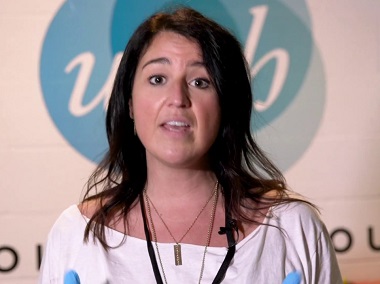 Jenny Konkin is co-founder and president of Whole Way House.

“We are in a housing crisis, but without the heart component people don’t stay long in housing.”

Jenny Konkin used to focus more on finding housing for homeless people in the Downtown Eastside, but she has refined her views:

When something happens they are homeless again. Four walls don’t make a home, especially when you’re dealing with people suffering from trauma.

Jenny co-founded Whole Way House with her brother Josh in 2013. As president of the organization she has at least two main goals.

One is to support the residents of Veterans Manor on Alexander Street just east of the foot of Main, where, in partnership with BC Housing, Whole Way House provides community building programs and tenant support services for 133 vulnerable seniors and veterans.

The other is to share what Whole Way House has learned with non-profits, which provide housing in the Downtown Eastside and can use help with meals and supportive services.

During a recent phone conversation, Konkin told me the recent BC election helped her to see how marginalized the people she works with are: “It’s become very clear that seniors don’t have a voice.” (CTV News interviewed her on the issue October 21.)

She thinks of her hard-working grandfathers as she spends time with men growing old in the Downtown Eastside: One worked at the Cominco smelter in Trail, while the other was a coal miner in Manitoba.

Most of us have so many choices, she said, but opportunities are limited for many of the men (and women) in the SROs. Pensions don’t go far, and many have no family around to support them:

I want them not only to age well, but also to thrive. . . . They’ve worked hard to build our country. It’s so hard to see them falling by the wayside. If there’s nobody there to support them, they’re at a very high risk of homelessness.

She said the 2020 Homeless Count for Metro Vancouver found that 25 percent of the homeless are seniors, and that most have become homeless after the age of 60.

She added, “We are trying to replicate that service in five other non-profits. . . . Non-profit landlords that own their own buildings are doing a great job providing housing; we partner with them to provide support services.”

“We had never done meal delivery before COVID,” Konkin said, but Whole Way House responded to the pandemic by making it a major focus. They now deliver over 3,000 meals each week to more than 600 low income seniors and vulnerable residents in the Downtown Eastside and beyond – more than 100,000 meals in total now.

“Eden Cafe was a huge partner,” she said, allowing them to use their downstairs to prepare meals and helping to deliver them. As demands and the need for more space grew, they shifted to The Dirty Apron, which is run by David and Sara Robertson.

Coastal Church has been a supportive presence in the background as well – it initiated Eden Cafe, while the Robertsons and Konkin attend the church. 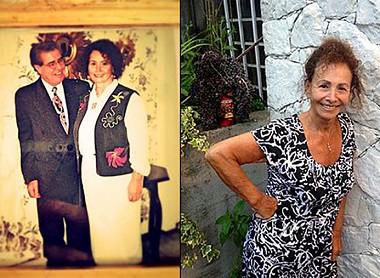 Mario and Mina (the ‘Nonna’) Angelicola bought the Avalon Hotel in the late 1970s.

Several times during our conversation Konkin referred to the importance of her own family legacy, in determining her vocation to work with seniors living in the Downtown Eastside.

In one sense, she came to her work naturally, as the Whole Way website explains:

Whole Way House began its journey serving the residents of The Avalon Hotel [a few blocks west of Main Street on Pender].

It was purchased by Mario and Mina Angelicola (Jenny and Josh’s grandparents) in the late 1970s. It was turned into an SRO (single room occupancy) in the late 1990s and houses approximately 85 low income tenants today.

Ron and Tina Konkin (Jenny and Josh’s parents) managed the building after Mario passed away. They undertook a massive renovation, upgrading the building to improve the quality of life for the tenants to really be able to feel at home.

One of my favourite childhood memories is of my dad taking my brother Josh and me to sing at old age homes; he played guitar and we sang hymns to the elderly as a family. Afterwards, the sweet old ladies would come up to me and thank me for taking time out of my day to brighten up theirs. I was very young, but I knew that helping people in need was what I was called to do.

Konkin told me that Whole Way has created a small social enterprise, which produces ‘legacy chains’ stamped with the words “I Get To.”

Here is what she wrote on the website about the project and its genesis:

Each Legacy Chain is hand-stamped by someone transitioning out of homelessness and/or recovery programs and all of the proceeds go to support our community building programs for vulnerable seniors and veterans at Whole Way House.

It was inspired by Ron Konkin and his journey with terminal cancer. When he was diagnosed with stage four melanoma, he said he changed his perspective from “I have to” to “I get to” and these necklaces are a great reminder to leave a legacy of gratitude and generosity.

The creation of the social enterprise reflects another element of Konkin’s background; in 2018 Business in Vancouver chose her as a ‘Forty Under 40’ winner.

When her father, Ron, was diagnosed with terminal cancer, Konkin, who had a successful corporate career with a major restaurant chain, was so jolted by the news that she decided to re-evaluate everything in her life.

“We took a lot of the corporate concepts and applied them into the operations here. . . . Being an entrepreneur, I asked myself, ‘Why are we not using some of the resources that are already here?’

“I treat the charity like a business, but the return on investment we consider is, are we helping someone’s life, helping them move forward? And it’s more important, because it’s not my money, but the generosity of our donors. We have to be accountable for all of that.”

Konkin said sales of legacy chains in time for Remembrance Day – which is, of course, a significant event at Veterans Manor – or for Christmas gifts would be encouraging for the seniors making them. Go here to order.