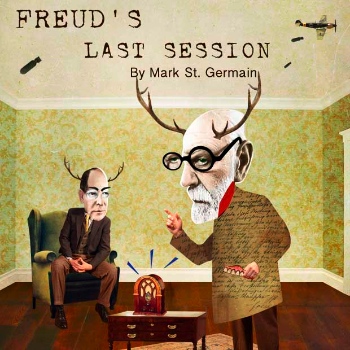 Two giants of the 20th century’s intellectual landscape will meet onstage at Pacific Theatre this weekend. The Vancouver theatre company describes Freud’s Last Session, which will run from April 24 – May 30, in this way:

As air raid sirens sound and Britain enters World War Two, C.S. Lewis and Sigmund Freud clash about love, sex, the existence of God and the meaning of life. An Off-Broadway sensation [it won the Best Play Award from the Off Broadway Alliance], this imagined meeting between two of the 20th century’s greatest minds delivers surprising emotional impact and human insight.

In a positive New York Times review of the play late last year, Sylviane Gold described Freud’s Last Session as “above all, a play of ideas,” and gave a synopsis of its genesis:

It started, as many good things do, at Harvard. That’s where, in 1967, Dr. Armand M. Nicholi Jr., a psychiatrist, began teaching a seminar on the rationalist, atheist philosophy of Sigmund Freud. Under pressure from students, he has said, he widened the syllabus to include a more religious point of view as well, adding the writings of the Christian apologist C.S. Lewis to the course. He called it “The Question of God.”

In the years since, his seminar has become a book, a PBS television program and the inspiration for an unlikely Off Broadway hit in 2010, Freud’s Last Session, by Mark St. Germain. 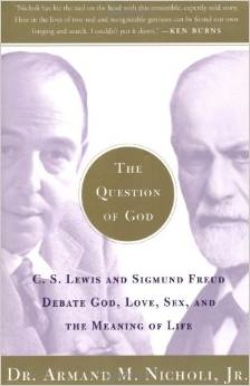 Following is an excerpt from Armand Nicholi’s book, The Question of God: C.S. Lewis and Sigmund Freud Debate Love, Sex and the Meaning of Life, which explains why he chose to write about these two men:

Both Freud’s and Lewis’s views have existed since the beginning of recorded history – the spiritual worldview, rooted primarily in ancient Israel, with its emphasis on moral truth and right conduct and its motto of Thus saith the Lord; and the materialist or ‘scientific’ worldview, rooted in ancient Greece, with its emphasis on reason and acquisition of knowledge and its motto What says Nature?

Why Freud and Lewis? . . . both write extensively about a specific, representative worldview with great depth, clarity and conciseness. . . .

Are these worldviews merely philosophical speculations with no right or wrong answers? No. One of them begins with the basic premise that God does not exist, the other with the premise that He does. They are, therefore, mutually exclusive – if one is right, the other must be wrong.

Does it really make any difference to know which one is which? Both Freud and Lewis thought so. They spent a good portion of their lives exploring these issues, repeatedly asking the question “Is it true?” 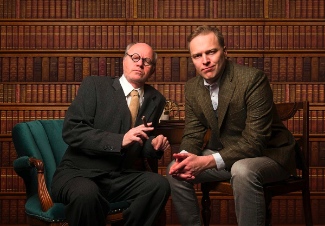 Freud’s Last Session is more than just a play of ideas: as Gold pointed out in the New York Times, the “two actors do not allow the theological dispute to deflect attention from the human dimension of this encounter.”

Pacific Theatre’s staging of the play is directed by Morris Ertman; Ron Reed and Evan Frayne play the main characters.

For those who would like to make sure they don’t miss any Pacific Theatre plays, the company has just announced its 2015 – 2016 season.