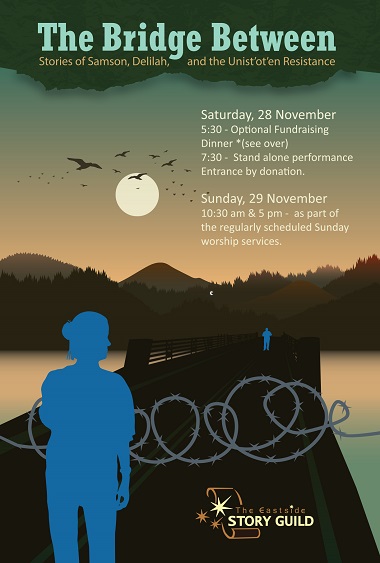 The relationship between Grandview Calvary Baptist Church (and friends) and the Unist’ot’en Camp has developed steadily since Eastside Story Guild put on The Bridge Between last fall.

This is the account of a storytelling event that brought together an Eastside Vancouver church and a First Nations community in British Columbia’s central interior. More importantly it’s the account of a 10 year old boy named Graeme who, for a moment, stood on the stage between two culturally and spiritually diverse stories and had the courage to allow each of them to speak to his own.

Graeme is a part of a grassroots performing arts initiative for children and youth in his East Vancouver neighbourhood called Eastside Story Guild. As a program of Grandview Calvary Baptist Church the Eastside Story Guild mandate is to put Bible stories on stage in way that makes sense of faith in a postmodern world.

In the fall of 2015 the kids and their adult mentors undertook to tell the Old Testament story of Samson, the Hebrew judge of divinely-appointed strength who fell in love with his Philistine adversary, Delilah.

Meanwhile, 1,100 kilometres away near Smithers in northern BC, the Unist’ot’en Camp was entering its sixth winter of holding a bridge at the Morice River crossing.

In 2009, Unist’ot’en leader Freda Huson established the blockade in response to a proposed pipeline corridor slated to cut across unceded Wet’suwet’en territory. In a second defiant move she invited Native and non-Native allies from across the province and around the world to join her in building a healing centre at the bridge site and on the GPS coordinates of the proposed pipeline. 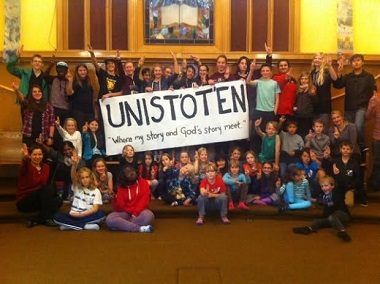 In the fall of 2015 Graeme had never heard of the Unist’ot’en, nor had any of the other kids or adult volunteers in Eastside Story Guild. However, one of the script writers – a member of the church – had participated in two Unist’ot’en work camps. He noted some interesting parallels between their story and story of Samson: 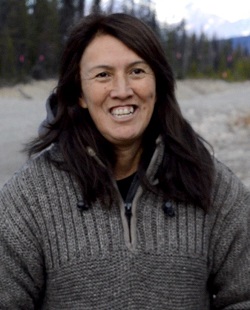 So it was that in October, four Eastside Story Guild leaders travelled to the Unist’ot’en Camp from Vancouver to meet with Freda and see the camp for themselves. Over two days they filmed her as she told the story of her people’s stand on the land.

Meanwhile, back in Vancouver, the script was set into a production called The Bridge Between, with the decision not to blend the stories as there were too many obvious cultural and theological differences between the two.

Instead, the stories would be told interchangeably, with the Samson story dramatized on stage by the kids of the Eastside Story Guild and the Unist’ot’en story told by Freda herself between scenes on large screens that hung from floor to ceiling. The Philistine temple was designed as an industrial oil complex with pipelines running in every direction.

Young Graeme was cast as Shilum, a fictionalized name and character for the Philistine boy who in Judges 16:26 leads the now blind Samson to the temple pillars where revelling Philistines are celebrating his defeat. In the moments before bringing the temple down on the Philistine elite Samson tells Shilum to run and not to look back. In this way Samson saves the life of one Philistine boy even while he takes the lives of 3,000 others. 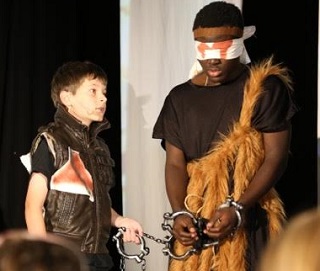 Graeme as Shilum with blind Samson in The Bridge Between.

When Samson pushes against the pillars, the pipelines break open and oil covers the stage (dramatized through video images on the giant screens and black cloth carried across the audience by the kids).

In the final scene, as the sad reality of the death and destruction settles on the stage and over the audience, Shilum returns to face the audience and asks what purpose the devastation has served. He stands orphaned and alone and recognizes the tragedy for what it is.

Needless to say, the response to the story of Samson was somber. The bursting of the pipelines was a stark symbol of the powerlessness that Samson and his people felt in the face of Philistine oppression.  At the same time there was something redemptive about the ending in as much as it helped a church-based audience connect Samson’s experience with the same sense of powerlessness that many First Nations in their own province feel when it comes to deciding the fate of their people.

As the kids and audience reflected on the sad outcome of the story at the end of the season, Graeme was among the first to pick up on the possibility of a different ending. The Samson story they all recognized was history but the Unist’ot’en story is still unfolding. 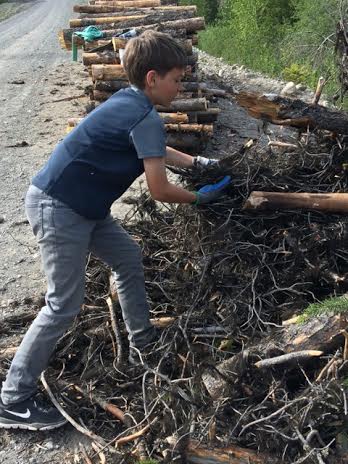 Graeme expressed an interest in going up to the camp in the spring to help with the construction of the healing centre. He wanted to learn more of the Unist’ot’en story. He wanted to understand the difficult confrontation of industry and Unist’ot’en land defence.

Yes, he insisted, he was willing to make the 16-hour journey north, to live without running water and flush toilets, to work long days with black flies and mosquitoes at his elbows, and do whatever else it would take to enter into the Unist’ot’en story.

Through the winter months others gathered around the idea and so it was that on May 19 Graeme together with a group of 17 from his church, aged 8 – 68, made the long journey north into Wet’suwet’en territory. For three days he hauled brush, laid cement and built scaffolding for phase two of the healing centre, then hauled more brush and washed endless mountains of dishes.

But most of all he stood shoulder to shoulder with our province’s First Peoples and, if only for three days, saw the world through a different set of eyes.

For more information on the work of Eastside Story Guild see sacredcanopy.com.

Tama Ward Balisky is the out-going director of Eastside Story Guild. She concurs with Jewish philosopher, Martin Buber that “all real living is meeting.” Visit her at tamaleighward.com.