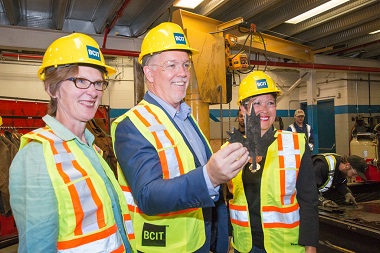 Premier John Horgan announced new guidelines for major infrastructure projects in BC July 16. A couple of Christian organizations, at least, are objecting to major elements of the plan.

The Christian Labour Association of Canada (CLAC), was mentioned prominently in a Business in Vancouver article the same day. It began:

The BC government is moving ahead with a $1.4 billion replacement of the Pattullo Bridge, but only BC Building Trades workers need apply.

Even if you belong to another construction trade union, like the Christian Labour Association of Canada (CLAC), that won’t get you the NDP stamp of approval.

British Columbia will return to being a union-only shop when it comes to large public infrastructure projects like bridges and roads, which will inflate costs of large public projects, non-union contractors and business association like the Greater Vancouver Board of Trade (GVBOT) warn.

The CLAC, which has an office in Langley, posted an article (BC NDP misses opportunity with Community Benefits model) July 17. It read, in part:

The impact of the decision could have serious ramifications for the construction industry, since over 85 percent of the province’s construction workers are not members of the Building Trades Unions.

“The BC government missed an opportunity to create an inclusive community benefits model for all British Columbians,” says Wayne Prins, CLAC executive director. “Community benefits are not, and should not, be contingent upon a labour monopoly.”

CLAC and its members are supportive of community benefits programs, frequently launching and participating in innovative training-to-employment initiatives in partnership with local communities throughout the province. . . .

“British Columbians should be extremely wary of any effort to allow a select few unions to determine who has the right to access work on public projects,” says Prins. “Community benefits agreements should protect an employee’s right to unionize freely; preserve fair and open tendering; keep public projects open to the public; and maximize opportunities for Indigenous peoples, women, youth and apprentices.”

Brian Dijkema of Cardus, a Christian think tank based in Ontario, has also raised questions about the NDP’s plan. Quoted in a Province article, he said:

Skimming off the Top, a 14-page report by Dijkema released by Cardus July 16, stated:

Go here for the full report, which focuses on BC, Manitoba and Ontario.

The provincial government described the highlights of the agreement in a news release:

The first projects to be delivered under the new community benefits framework are the new Pattullo Bridge, and the four-laning projects on the Trans-Canada Highway between Kamloops and Alberta. The request for qualifications (RFQ) for the Pattullo Bridge Replacement Project has been released.

Go here for the full release from the Premier’s Office.

Folk Fest ‘Church in the Park’ 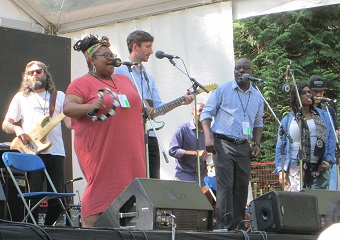 Dawn Pemberton opened the Sunday morning workshop with a bang.

Every year I look forward to Sunday morning at the Vancouver Folk Music Festival, and (almost) every year my hopes are met. I had heard that the show was no longer being described as a gospel show, given the multicultural nature of Vancouver

The long-time host of the show – who looked more like a grizzled hippy than the typical church-goer – must have missed the memo, because he introduced the 10 am workshop as “Sunday morning church in the park,” though admittedly he followed up with this chaser: “Pass the hat part way through to raise money for scotch for the crew.”

Westboro Baptist might not have approved, but the congregation was blown away as Dawn Pemberton, Ranky Tanky and Jayme Stone’s Folklife traded songs for an hour. All but one was a gospel song or spiritual, if I remember right.

And oddly enough, the tone of several songs – despite their joyful presentation – was decidedly more admonitory than regular churchgoers around the city would normally hear.

Dawn Pemberton, a local gospel/blues/jazz singer well known in both sacred and secular settings, launched with a funky, dynamic version of ‘Don’t Let Nobody Turn You Around’ – the original African American Spiritual version, rather than the modified Civil Rights version, as far as I could tell. Here were some bits I caught:

When you’re walking up to heaven

Don’t let nobody turn you around

Lots of drums, some solo guitar – much louder and livelier than most churches.

Jayme Stone’s Folklife had everyone join them – and the response was surprisingly enthusiastic – in ‘I Want to Hear Somebody Pray’:

I want to hear somebody pray

Down in the valley, over yonder

I want to hear somebody pray

For a video of them singing the song (not at the festival), go here. 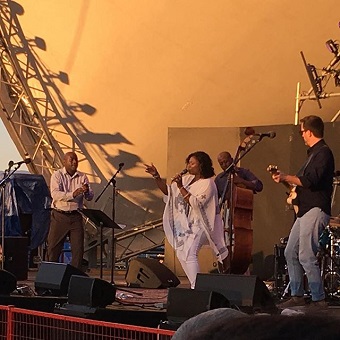 Ranky Tanky played ‘You’d Better Mind’ both Sunday morning and later on the mainstage, as shown in this Folk Fest photo.

Ranky Tanky represent the lowland Georgia and South Carolina African American Gullah culture. Led by Quiana Parler, they closed with stronger medicine than you would find in most churches.

You’ve got to give an account at the judgment

You’ve joined a church but you won’t live right

You’ve got to give an account at the judgment

I also saw Ezra Kwizera and Archie Roach (both of whom I wrote about, along with Dawn Pemberton, a couple of weeks ago). 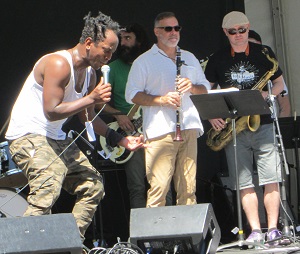 Kwizera was a great performer, dancing, drumming and interacting with Gord Grdina’s Haram very comfortably during the workshop I saw.

Roach spoke eloquently about the hard times his mother had on a mission (reserve) run by the Anglican Church in southwest Victoria (Australia). He was taken from his family to be adopted by a non-Indigenous family, and is still living with the effects.

He is estranged from the church these days, apparently, but it has clearly left at least some positive impressions. He said at one workshop:

I don’t know what it was I enjoyed about church – not so much the religion. But I loved to sing, it made me feel good. . . .

Then Roach gave a sense of why religion has been such mixed blessing:

A little child will lead them home . . . something the rev said: “Take my hand and don’t be afraid, for we are not alone, a little child is gonna lead you home.” 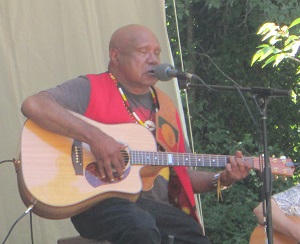 Following that he sang ‘Took the Children Away,’ which begins:

Go here for all the lyrics and a video of the song. 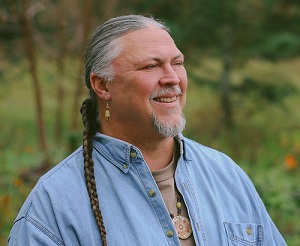 Two key Indigenous leaders will be in town this week.

Randy Woodley will be at the Vancouver School of Theology for the Unsettling the Word Book Launch this Friday (June 20).

Unsettling the Word: Biblical Experiments in Decolonization is “an anthology of Indigenous and Settler voices grappling with Scriptures and imagining decolonial possibilities.”

Hosted by Healing at the Wounding Place, Salal and Cedar Watershed Discipleship Community and Streams of Justice, the event is described in this way:

For generations, the Bible has been employed by settler colonial societies as a weapon to dispossess Indigenous and racialized peoples of their lands, cultures and spiritualities. Given this devastating legacy, many want nothing to do with it. But is it possible for the exploited and their allies to reclaim the Bible from the dominant powers? Can we make it an instrument for justice in the cause of the oppressed? Even a nonviolent weapon toward decolonization? 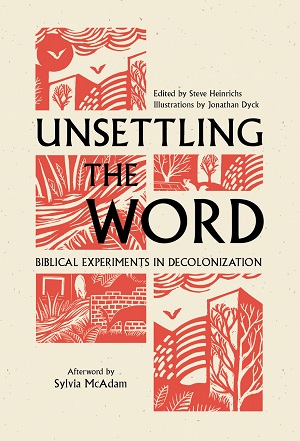 In Unsettling the Word, over 60 Indigenous and Settler authors come together to wrestle with the Scriptures, re-reading and re-imagining the ancient text for the sake of reparative futures.

Created by Mennonite Church Canada’s Indigenous-Settler Relations program, Unsettling the Word is intended to nurture courageous conversations with the Bible, our current settler colonial contexts and the Church’s call to costly peacemaking.

Woodley wrote ‘Truth to Power’ for this collection, a rather timely piece involving President Trump, Mexican immigrants, allegiance to the state, prison and angry settlers.

The accompanying passage is Daniel 3:14: “Nebuchadnezzar said to them, ‘Is it true, O Shadrach, Meshach and Abednego, that you do not serve my gods and you do not worship the golden statue that I have set up?'”

Rev. Randy Woodley, PhD, is a Keetoowah Cherokee (legal descendent) teacher, poet, activist, former pastor, missiologist and historian. He teaches at Portland Seminary, George Fox University. His books include Shalom and the Community of Creation: An Indigenous Vision, 2012 (Eerdmans) and Living in Color: Embracing God’s Passion for Ethnic Diversity, 2004 (IVP).  He is a founding board member of NAIITS, the North American Institute for Indigenous Theological Studies. 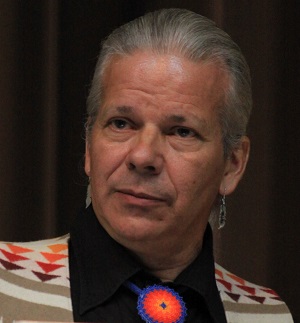 Dr. Terry LeBlanc will be at Regent College just three days later (July 23), addressing the topic When Fundamentalism Meets Liberalism, as part of the school’s evening lecture series. He is teaching the class Indigenous Theologies & Methods next week.

The talk is described in this way:

Should this current trend continue, we might be witnessing the emergence of a new form of fundamentalism – a liberal one, intolerant of legitimate, non-violent expression of difference of opinion and action, and which ought to expect equal toleration. The question becomes, “Is this a new form of fascism – albeit physically non-violent?”

LeBlanc was also a founder of NAIITS, along with Woodley. He is executive director of Indigenous Pathways and director of NAIITS. In addition to producing varied award-winning writings, Terry has worked for over 39 years in global Indigenous contexts as an educator in theology, cultural anthropology and community development.