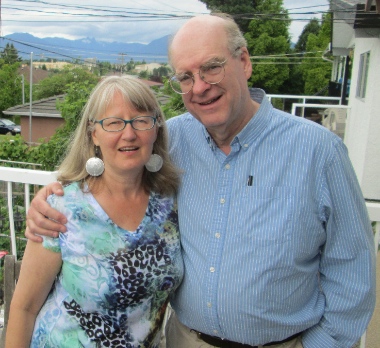 Debra Fieguth and her husband Ian Ritchie came out to Vancouver in 2014 from their home in Kingston, Ontario.

It has been quite a few years since Debra Fieguth lived in Vancouver, but I know she retained a good number of friends here – and many more will remember her from her days as editor of BC Christian News. Along with her many friends across Canada, we were saddened to hear that Debra died last weekend of a massive stroke.

Many comments – shocked, loving, sorrowful – have flowed in to her Facebook page, and that of her husband Ian. Some were from professional colleagues, writers and media types. But many more came from refugees, international students and others who have been welcomed and befriended by her over the years.

Debra and I worked together at Christian Info Society for several years. She was the editor and I was just learning something of the craft (having been trained in law). She was a great teacher – practical, no-nonsense, reasonable and knowledgeable. We became friends and have remained so over the years, even after she moved to Winnipeg and then Kingston.

Veteran journalist Lloyd Mackey first met Debra in about 1976, when he was editor of The Chilliwack Progress, then at Christian Info during the 1980s. His assessment:

She was an excellent journalist with a strong sense of both personal faith and social justice. Her research was meticulous and her writing style was clear, simple and often innovative.

Co-workers at ChristianWeek in Winnipeg and in Ontario have similar perspectives. Faith Today senior co-editor Karen Stiller has written a lovely remembrance of Debra. In part, she said:

To be a senior writer for Faith Today means that writer is a “go-to” person for us. It means that we can assign that person almost any story and know it will be done well. Debra was a go-to person in her work. She was also most certainly that in her life.

Debra was an activist of the faith. She was someone intent on making the crooked straight, setting right what had been made wrong.

Debra was a go-to person for countless numbers of international students who found a home through weekly dinners and I’m guessing endless drop-in visits to their home in Kingston. Debra and her husband Ian lived and breathed hospitality. It’s just what they did. She wrote a book about it.

Go here for the full article, including links to some featured articles.
Margaret and I will miss Debra; we are praying for her husband Ian Ritchie.
Heritage churches
Every spring, Heritage Vancouver releases a Top10 Watch List of endangered heritage buildings. This year’s list, released May 5, included one former and one current church. Numbers four and five on the list are the Salvation Army Temple at Hastings and Gore and St. Stephen’s United Church on Granville Street at 54th Avenue. 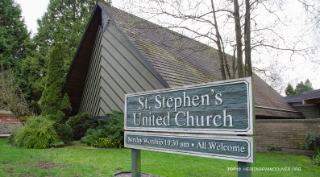 Heritage Vancouver offers insightful commentaries on each of the buildings. Here is part of their comment on St. Stephen’s:

This is the third year in a row that historic churches have been featured on our Top10 Watch List. As many Vancouver churches face declining attendance, the rate of church closures is threatening the future of community heritage and gathering spaces. St. Stephen’s United Church, designed in a West Coast Modern style, opened in 1964.

In a story that is now all too common, the 150-seat sanctuary used to be full on Sundays; the congregation has now declined to less than 90 people, and only about 30 members attend the weekly service. In a few years, the church may have to close, and the building will likely be sold and replaced by mid-rise housing following the development pattern nearby on south Granville Street.

When heritage churches close, Vancouver communities lose more than places of worship, they also lose space for the countless social and cultural activities that churches host each week. With fewer places for groups to meet in our ever-denser city, more people will become isolated, diminishing our quality of life. Public places are essential to a healthy community and are a cornerstone of democracy, and our churches represent a very significant amount of the social gathering space available in our city.

This comment begs the response that there are many churches in Vancouver that are growing – and need church buildings. One would hope that church buildings could be passed, at reasonable prices, to dynamic new churches, in cases where the original churches really feel they cannot carry on.

Rather than follow the more conservative architectural styles of earlier churches, the architect, Arthur J. Mudry, designed the building in a contemporary West Coast style. He was one of the many talented Vancouver area postwar architects whose modernist residential and institutional designs responded to the unique regional landscape and climate. Mudry also created the award-winning design for the striking Baptist church (1967) located at 450 Mathers Avenue in West Vancouver. 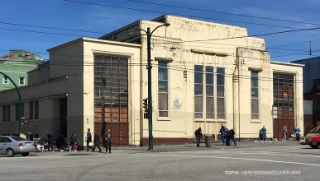 The old Salvation Army Temple in the Downtown Eastside also made the Top10 list.

For more detail on the threat to, and significance of, St. Stephen’s, as well as the position of Heritage Vancouver and possible supportive actions go here. And for the same kind of details related to the Salvation Army Temple go here.

The fact that Heritage Vancouver identifies a building as being worthy of saving does not, unfortunately, necessarily mean it will be saved. A church featured last year, Oakridge United, will be torn down soon to make way for a residential building (including some sacred space). Kerrisdale Baptist – not being used as a church at present – was featured in 2014. 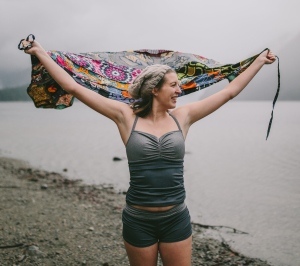 Nettle’s Tale has created a ‘Mercy Ships Suit’ suitable for use in conservative nations.

Nettle’s Tale, a local company which makes “honest swimwear for the everyday woman” was featured on CBC Radio’s The Early Edition May 6:

A Vancouver swimwear designer has collaborated with a team of nurses to design a suit they can wear while volunteering in countries with more modest clothing standards.

Nadine Kapteyn and three other BC nurses were stationed in West Africa with Mercy Ships – a charity that sends a private hospital ship to provide free primary medical care to cities around the world – when they realized they could use a specialized swim suit. . . .

“One of Mercy Ship’s mandates is to ensure that they’re culturally respectful to the various, very diverse countries that they volunteer in, so they encourage everyone to dress in a way that is respectful to whatever dominant culture you’re staying in,” Kapteyn said.

She and her colleagues worked with Nettle’s Tale on the ‘Mercy Ships Suit”; 10 percent of profits will go to Mercy Ships.

Mercy Ships provides free primary medical care and community support to impoverished people in developing countries who would not otherwise have access to that kind of surgery. (The mission of Mercy Ships: “Following the 2000-year-old model of Jesus, Mercy Ships brings hope and healing to the world’s forgotten poor.”) 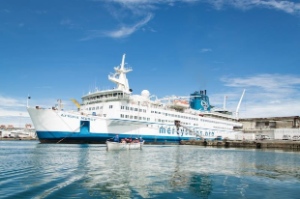 Ten percent of profits from the ‘Mercy Ships Suit’ will go to support Mercy Ships.

For the Early Edition article go here – there is also a link to a podcast of the full interview.

Julia Church is an entrepreneur with a background in management, sales and theatre. Her concept for Nettle’s Tale was born out of personal experiences with body image and swimsuit shopping. Launching the company in 2014, her crowdfunding campaign quickly went viral, established an international fan base for her Canadian-made swimwear, and smashed through its revenue goal seven times over.

Building on her e-commerce success, Julia took Nettle’s Tale brick- and-mortar. She opened a Vancouver showroom and then a storefront, Neighbourhood Quality Goods [at 27th and Main], which she co-owns in the fashion-forward ’hood of Mount Pleasant.

She was featured in WeMakeStuff  02, a beautifully produced 2014 book which featured 100 artists and innovators from BC, mostly from Metro Vancouver, who “share a common pursuit of living a life that embodies the teachings and Spirit of Jesus Christ.”

My canvas is the female form, which comes in so many different shapes and sizes – and we make suits to fit them all. . . . It is unusual – though it shouldn’t be – for a woman to visit a shop and feel like she fits! Like she is being represented and her body is being embraced. This is the purpose of my designs: to portray the female form just as it is, authentically beautiful.

Courage to Come Back

Coast Mental Health raised a record $1.43 million at the 2106 Courage to Come Back Awards May 5. Apart from raising funds, the evening was intended to “recognize six truly remarkable British Columbians – their courage to overcome serious adversity, change their lives for the better and move forward to help others do the same.”

All six stories are inspiring, but a couple, at least, also involve the Christian community: 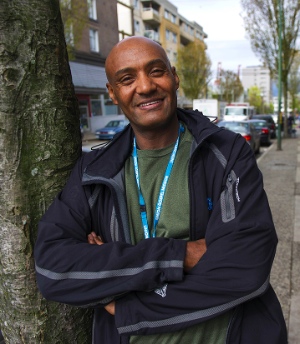 Jemal Damtawe has overcome a traumatic childhood and serious addictions; he now works at UGM.

Jemal Damtawe received his award in the Addictions category.

He was forced to become a child soldier at the age of 15 in Ethiopia. Eventually he escaped, gaining asylum in Canada in 1989. He started a restaurant in Montreal, getting married and having a daughter.

But he couldn’t shake his trauma, undiagnosed PTSD. He self-medicated with drugs and alcohol, left his family, moved to Portland, Oregon, joined a gang and became a drug dealer. The threat of death led him back to Canada – this time Vancouver – in 2005.

An article in the Province said:

Christmas morning 10 years ago Jemal Damtawe woke up to find a friend he had been using drugs with the night before dead of an overdose outside the shared bathroom of his single room occupancy suite on Vancouver’s Downtown Eastside.

He knew instantly that he wanted out. He literally ran to the Union Gospel Mission and asked to enter the rehab program, an act of surrender that changed his life forever. . . .

“Something changed when I came to UGM,” he said. “People prayed for me and they encouraged me, so I got that hope.”

He entered into a four-month recovery program and now helps others [as a UGM outreach worker].

“Without judging them, I just love them, like God loves them,” he said.

His nominators said Damtawe spends Christmas and other holidays with men in recovery so they won’t be alone, engages with youth, preaches at church, offers spiritual care and mentors students.

On weekends, he hands out water and granola bars to people on the streets of Coquitlam, where he lives with his new wife and four year old son and attends church. (Damtawe was reconciled with his daughter, now 23, and visits her regularly.) 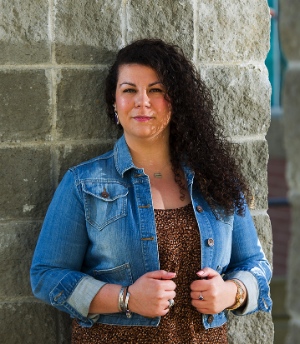 Meredith Graham has been supported by many people as she dealt with mental health issue.

Meredith Graham received her award in the Social Adversity category. She was diagnosed with depression and Obsessive-Compulsive Disorder at 13, bi-polar disorder at 18 and borderline personality disorder at 26. She ran away from home as a teen, couch-surfing with friends. In high school she used coping strategies that further put her health at risk, such as disordered eating.

Another story in the Province said:

However, she said she’s not a victim who’s defined by her mental illness but a “trauma survivor,” and she credits teachers and a church mentor with rescuing her by taking her into their homes and teaching her how to live life.

“They mentored and they guided me,” she said of two women at her church. “I spent holidays at their home. They are my family.”

She said the women answered her questions about how to function in the basics of life and “they just wrapped themselves around me from the beginning.”

Before those women, two high school teachers had also had Graham move in with them at different times, the first when she was 15 and was caught with a knife in school.

One of the conditions was that Graham attend church with the teacher’s family and “I happily agreed.”

I will be away for one week in England; thus the next weekly Church for Vancouver update will be posted May 25.