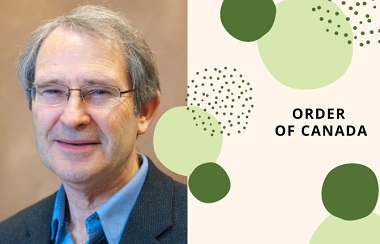 Two men well known in the local Christian community – David Ley and Pitman Potter – were appointed to the Order of Canada December 29.

David Ley is now an Officer of the Order of Canada, “for his ongoing and substantial contributions to the field of human geography.”

UBC’s Department of Geography posted a recognition of his accomplishment January 4:

Across Dr. Ley’s prolific career, his research and teaching have focused on the fields of urban and social geography.

A principal long-term interest has been the processes of social and spatial change in older inner city neighbourhoods. Most notably, he has conducted work on gentrification; processes of urban reinvestment leading to housing renovation or redevelopment; and the replacement and displacement of poorer households by the middle-class. . . .

Dr. Ley first joined UBC as an assistant professor at age 24 in 1972. He received his BA in Geography from Oxford and his PhD from Pennsylvania State University for an ethnographic study in an Afro-American neighbourhood in Philadelphia. He has authored six books, including Millionaire Migrants (2011) and The New Middle Class and the Remaking of the Central City (1996), and co-edited another five.

From 1996 – 2002, Dr. Ley was the founding UBC leader of the Metropolis Centre of Excellence, a long-term interdisciplinary research program on immigration in Canadian cities, partnered with government and NGOs. He served as head of the Department of Geography from 2009 – 2012. 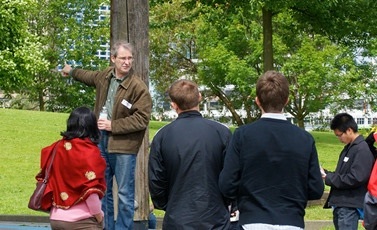 Since retiring from the department in 2018, Dr. Ley has remained highly active as a scholar. His forthcoming book, Housing Booms in Gateway Cities is being published by Wiley in 2023, and includes research in Singapore, Hong Kong, Sydney, London (UK) and Vancouver.

Among his honours, Dr. Ley has been a Trudeau Foundation Fellow, a Canada Research Chair, a Fellow of the Royal Society of Canada and a recipient of the Distinguished Scholarship Award of the Association of American Geographers. He was recently elected a Fellow of the Academy of Social Sciences in the UK, and holds an honorary doctorate from the University of Neuchatel, Switzerland.

Ley may be best known to Vancouverites through Douglas Todd’s Vancouver Sun columns, such as ‘Metro Vancouver has 650 homes worth $10 million+. That’s 13 times higher than 2010’ (June 30, 2022). Todd tweeted: “Congratulations to @UBCGeog Prof. emeritus David Ley for receiving the  @OrderofCanada. This year he talked about how ‘global money, as well as local and national,’ has been flooding the Vancouver property market.”

Ley wrote an opinion piece in the Sun June 21, 2022: ‘Massive densification will not solve our housing affordability program.’

I have posted several articles about his work over the years, linking, for example, to papers such as ‘The immigrant church as an urban service hub’ (Urban Studies, 2008). Every summer for many years – until at least 2019 – Ley led Postmodern Urban Spaces tours from Regent College, where he has been a board member. He attends St. John’s Vancouver Anglican Church. 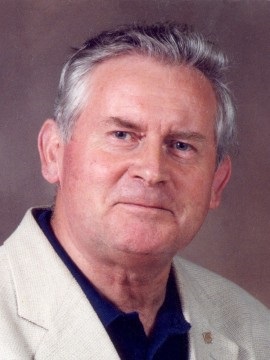 Olav Slaymaker was also awarded the Order of Canada.

The Department of Geography has proved fertile soil for Order of Canada recipients. Ley pointed to the “extraordinary number” of recipients – six since the foundation of the award in 1967.

At least one of those other recipients, Olav Slaymaker, has also been very active in the Christian community. Now retired, he still sits on the Academic Advisory Board of the Peter Wall Institute for Advanced Studies at UBC.

One interesting side note about Slaymaker. This exchange took place during a wide-ranging interview between Dr. Leonora King (UBC Geography alumna and faculty member at Kwantlen University) and Olav Slaymaker in February 2020:

LK: . . . Could you reflect a little bit on any big regrets you have with respect to your career.

OS: Yeah sure. A big regret is my inability to express my faith in the lectures in the secular university. I regard this as harassment in a broad sense. I’m not into litigation or anything like that. But I think we don’t realize that secularism is itself a religion. And whilst it’s successful in more cases than not, it is one of a number of options.

And I was forbidden from talking about my faith in my class lectures. Now, of course in mentoring and in one-to-one relationships, I’ve done a lot of talking about religious faith. And I felt that there’s been no hassle whatsoever about that. But from the point of view of the 10 to 12,000 students that I’ve lectured at, that’s a profound regret. Because they don’t know who I am, they have no idea. I doubt to them that’s special, but for me, it’s special.

And you know, I still bump into students who are enthusiastic to see me. They can’t remember my name and I can’t remember theirs, but an incredible community exists in this region on which I’ve had some influence. But I think they missed out on the most important part of me.

LK: So your regret is that they missed out on an element of authenticity?

OS: Yes. Yes that really, in a sense, whilst I was perfectly authentic about my misguided emphases at the beginning of my career, I should have been able to somehow or other document a change in my perspectives over time, and that this would be more helpful to them than the idea that Slaymaker has his ideas and they’re static and really he is part of this secular world that is academia.

I think we’ve shunted ourselves into a corner in physical geography, by pretending that one methodology, one epistemology, is adequate, and we don’t want to talk about ontology at all because it just doesn’t bear looking at.

The interview covers much more ground than this portion and is available here. 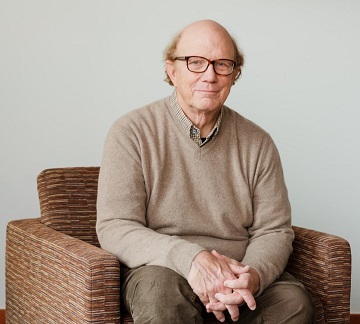 Pittman Potter, Professor Emeritus at the Allard School of Law, has been appointed to the Order of Canada.

Pitman Potter has been appointed a Member of the Order of Canada, “for his precedent-setting scholarship in the field of Chinese legal studies, and for his dedication and service to his community.”

The Peter A. Allard School of Law celebrated this achievement; here is a portion of their statement:

Pitman Potter . . . is recognized for his precedent-setting scholarship in the field of Chinese legal studies and for his dedication and service to his community. . . .

Potter is an internationally acclaimed expert noted for his innovative and impactful research on human rights, foreign trade and dispute settlement in Taiwan and China.

He has led large-scale research projects in countries throughout Asia, including India, China and Japan, and his work has informed the development of law and policy here in Canada and internationally.

He has been awarded multiple large research grants, including two multi-million-dollar SSHRC Major Collaborative Research Initiative grants for his Asia Pacific Dispute Resolution Program. Prior to retiring from UBC in 2020, Potter served in numerous leadership roles at the Allard School of Law, including as Director of Chinese Legal Studies, Director of Asian Legal Studies, Director of the Graduate Program and Associate Dean.

A prolific writer and researcher, Potter has published more than 15 books and over 100 articles and book chapters, and has continued to publish since his retirement. His latest book, Exporting Virtue? China’s International Human Rights Activism in the Age of Xi Jinping (2021), examines the challenges that China’s human rights doctrine poses to international norms and institutions and makes recommendations for effective policy responses.

Potter is currently at work on a new project examining China’s responses to three ongoing international crises: COVID-19, climate change and involuntary migration. “This work explains China’s reaction to the complexity of global governance through promotion of new legal and policy standards for governance, the economy, and society that suit China’s policy perspectives and goals,” Potter explains. The book will include recommendations for constructive engagement with China and a call for principled responses to human rights abuses and other challenges.

In addition to Potter’s academic achievements and contributions to Canadian and international law and policy, he is also an ordained Deacon (ret.) in the Anglican Church, active in local ministries of service to the homeless and needy on the streets of Vancouver.

He says this work has been particularly rewarding: “I have been fortunate to work with so many wonderful people on the streets and in our communities in this transformative ministry.”

The Rev. Dr. Pitman Potter is licensed as deacon to the Archdeaconry of Vancouver. This arrangement allows Pitman to be in ministry with the parishes of St John’s Shaughnessy, St Philip’s Dunbar and St Anselm’s, as well as continuing his work with the West Point Grey Neighbourhood Ministry (which I wrote about here).

Working with the Pope 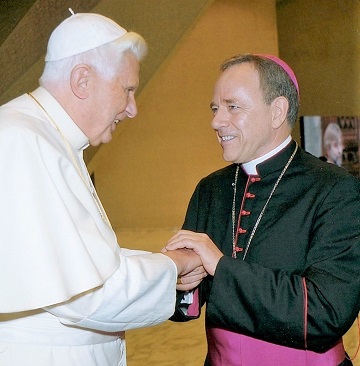 The late Pope appointed Michael Miller as Archbishop of Vancouver in 2009. (L’Osservatore Romano)

An article in The B.C. Catholic captured the extent of his regard for the late pontiff:

[He] commended Pope Emeritus Benedict XVI as an intellectual giant and great evangelizer.

“The death of Pope Emeritus Benedict XVI is an occasion that causes us both sadness for our loss and gratitude for his ministry,” wrote Archbishop Miller.

“Although the Church and the world have lost one of the finest Christian minds of modern times, his passing invites reflection on his dedicated service to the Gospel.”

In the days following the death of Pope Emeritus Benedict XVI, Archbishop J. Michael Miller spoke about the life and legacy of Pope Benedict XVI and offered prayers for the Pontiff he worked with in Rome for three years. . . .

Archbishop Miller worked with Pope Benedict until June 2007, when he was named Coadjutor Archbishop of Vancouver.

Go here for the full article, which includes quotes from the time Archbishop Miller was still in Rome. 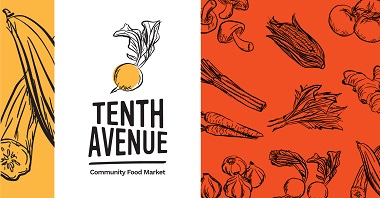 For over 20 years, Tenth Church has met to break bread with the local community regardless of their wealth and social status. Now, we seek to continue developing relationships with the friends we have made, empowering them to make their own choices regarding their health.

Tenth Church’s achievements have helped the community thrive, and have provided food, discipleship, relationships, employment and material goods to those on the margins. The community can further thrive by choosing what food they eat for themselves, therefore, we seek to build a community food market.

When you ask someone what it feels like to be poor, they may say they feel inferior, powerless, less than human, and that they cannot change their life. Charitable acts which reinforce the divide between helpers and the helped can make the one who gets help feel less than the one who helps. Other charitable acts, such as some food banks, grant the helper full autonomy over what they give to the one being helped.

Community food markets, however, as simple as they may be, help alleviate these negative feelings and help to reduce social and economic poverty. They are a place where people can congregate, volunteer, and feel as though they are involved in society.

A guest at the market can feel a sense of equality as they can pay for some of their items. They are also granted some power over what they choose to eat. It helps the guest feel human as they begin to participate in regular economic life. It allows for avenues (classes, cooking advice, relationships) that will allow the guest to change their life.

With the rising cost of food, the issue of food security is becoming more important as the days go on. Food insecurity is a current and practical issue, and it represents a tangible opportunity we have to love our neighbours.

The Community Food Market will be open every second week at Tenth Church, on the corner of Ontario Street and 10th Avenue.