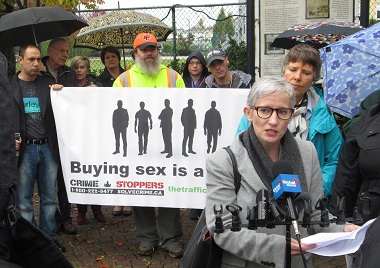 Gwendoline Allison was one of several speakers at an October 18 press conference / rally which urged the police and government to enforce Bill C-36.

Two years ago the federal government passed Bill C-36, which made the purchase of sex illegal. So far, however, no one has been arrested in British Columbia.

On Tuesday (October 18), a coalition “working to eliminate the exploitation of women, youth and girls” held a press conference / rally at the corner of Joyce and Kingsway; speakers representing several groups called for police enforcement of that legislation. (See thetraffickedhuman.org for more information on the movement and the groups involved.)

Vancouver’s Mayor Gregor Robertson attended a conference last summer hosted by the Holy Father Pope Francis on climate change. Mayor Robertson was one of 200 mayors there, and the only Canadian. He signed a declaration on climate change and human trafficking which includes aiming to end prostitution.

At the same time, we commit ourselves to ending abuse, exploitation, trafficking and all forms of modern slavery, which are crimes against humanity, including forced labor and prostitution, organ trafficking and domestic servitude

To date in British Columbia, however, not a single buyer has been arrested. On a local prostitution customer review website, the moderator calmed the fears of his members by telling them that they have a greater chance of winning the Lotto Max than of being arrested. . . .

We are here today to call on our police forces to enforce the law against the purchase of commercial sex and to call on Mayor Robertson [who also chairs the Vancouver Police Board] to live up to the commitment he made in his declaration to combat prostitution and human trafficking.

Allison pointed out that “The Protection of Communities and Exploited Persons Act [Bill C-36] represents a shift in thinking, and focuses the range of the !aw on the actual source of the harm: the buyers and the profiteers.” 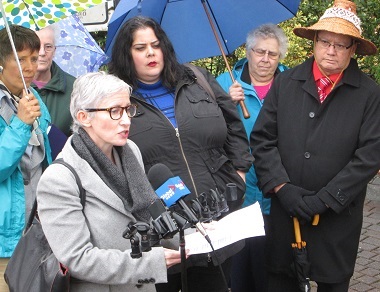 We at EVE are all former sex industry women and we are so glad to see this campaign happen. In 2014 Canada criminalized the buying of sex and I am not sure the average citizen knows that.

In an era of missing and murdered women and bad date sheets we know prostituted women are suffering from extreme violence and we need to stop talking about the violence as if it happens in a void.

There is disagreement over the efficacy and propriety of Bill C-36. A comment from the Canadian Civil Liberties Association, for example, sums its perspective up in this way:

Overall, Parliament has introduced legislation that seeks to eliminate and discourage prostitution, rather than create safer conditions for prostitutes who engage in the legal activity of selling sexual services, as was demanded in Bedford. [The Supreme Court of Canada declared in the Bedford case that the three provisions of the Criminal Code concerning activities related to prostitution were unconstitutional and that Parliament had one year from December 2013 to enact new legislation].

Gwendoline Allison responded to such criticisms by pointing to the true intent of Bill C-36:

The clear statement from Parliament is that girls, youth and women are not for sale; that they are whole human beings, with dignity and human rights. The Act makes buying commercial sex, receiving a material benefit from prostitution and advertising criminal offences. Those are dramatic shifts.

Parliament recognized that prostitution is a demand driven industry and that it is necessary to target demand and prohibit the purchase of commercial sex. 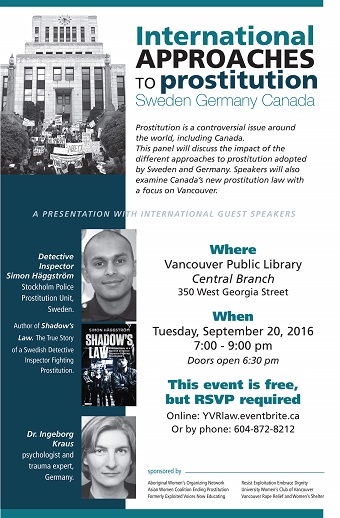 Simon Haggstrom and Ingeborg Kraus made a presentation at the Central Library as well as appearing on CBC’s Early Edition in September.

Trisha Baptie has put the situation in perspective on her Facebook page by pointing to a useful CBC Radio interview. On September 20, Early Edition host Rick Cluff asked ‘How prostitution laws work in Sweden and Germany and what Canada can learn.’

Cluff began by pointing out that “The federal government has pledged to review Canada’s prostitution laws, with the goal of reducing violence against women. Justice Minister Jody Wilson-Raybould [MP for Vancouver Granville] says reforms could be coming, but experts don’t necessarily agree on the best approach.”

He noted that Bill C-36 – which makes the purchase of sex illegal, while the sale is still allowed – was based on Swedish laws.

Sweden has criminalized those who pay for sex, while Germany has legalized the sex industry. Detective Inspector Simon Haggstrom, head of the Stockholm Police Prostitution Unit, and Ingeborg Kraus, a psychologist and a trauma expert who has worked with women in prostitution in Germany, described how these models are working – well in Sweden, badly in Germany.

Haggstrom said there is a “huge difference” between the two systems:

In Sweden we see prostitution as something harmful, not only to the individuals involved but to society at large. . . . When you talk about prostitution, you have to see the link to organized crime, that the sex buyers are actually the crucial sponsors of human trafficking. . . .

When we introduced it back in 1999 . . . this legislation caused a lot of controversy. In the beginning there was a lot of opposition against the law. Several political parties opposed the law; the Swedish police didn’t want the law as well, and also about 70 percent of the Swedish population did not want to criminalize the sex buyer. . .

The biggest challenge at the beginning was probably to have the police to actually start to enforce the legislation. But today what we’ve seen over the past 17 years is a huge change in mindset in the Swedish population. All parties are actually in favour of the legislation today. The police believe it’s the most important tool in the fight against human trafficking, and today we have about 70 percent actually supporting the law . . .

Asked how things are going in Germany since the laws were changed to decriminalize prostitution, Kraus said:

Well, it’s a catastrophic situation. After 15 years . . . the women earn less money, the sex buyers become more perverse . . . No German woman would work in those conditions any more . . . 95 percent of the women working now in prostitution are women coming from the poorest areas of Europe, so it’s [become] poverty prostitution. . . . 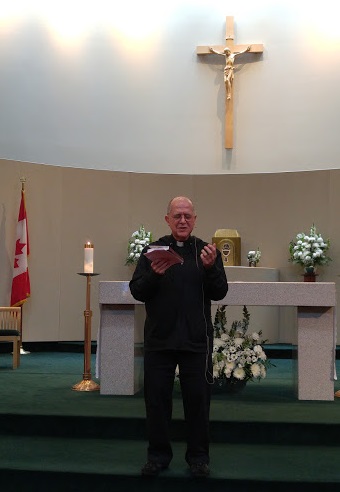 [When they passed the law 15 years ago], they wanted to strengthen the women, they thought that it’s not prostitution that is the problem, but discrimination of the society towards prostituted women . . . so the attitude of course changed, [they were] considered as sex workers. But the attitude of sex buyers changed also, so they don’t feel guilt any more, they think it’s their right and they want more and more. . . .

We need the Swedish model.

When the press conference concluded, participants walked down Joyce Street to St. Mary’s Catholic Church, where a short service was held. Fr. Gabriel de Chadarevian reminded those assembled of the words of Archbishop Michael Miller, who on October 14 sent out a release warning that “Vancouver could become a global hub for sexual slavery”:

Prostitution is nothing less than slavery. In a city that is Ground Zero for the Inquiry into Missing and Murdered women, it is unacceptable for us to tolerate anything that escalates the trafficking of girls, youth and women from Pacific Rim countries and Aboriginal communities, effectively turning our city into a hub for globalized sex slavery. 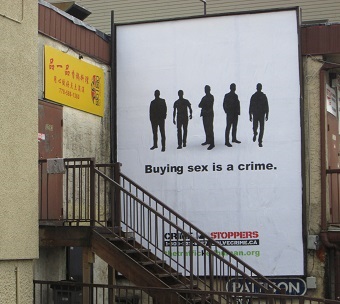 This sign is on Joyce just north of Kingsway; there will be 17 such signs around the city until the end of October.

Organizers suggest a number of ways to get involved with their work, including going to thetraffickedhuman.org; signing their Prevent, Prosecute and Protect petition; and reporting any violations of the law to Crime Stoppers.

There will also be a poster campaign supporting the cause, until the end of October. ‘Buying Sex is a Crime’ signs can be found at 17 locations around the city, including a couple of large billboards at Main and Terminal and Joyce and Kingsway.

Three related initiatives will be coming up soon:

On October 21, Christ City Church will host Integrate: Sex Trafficking, Justice and the Gospel. Organizers describe the event in this way:

Phil Reilly of International Justice Mission (IJM) will make a presentation; he will then be joined by several panelists:

Resist Exploitation, Embrace Dignity (REED) is a Vancouver-based organization that seeks to end trafficking and sexual exploitation and to strengthen the anti-trafficking movement. They are inviting the community to Cheers to Awareness:

On November 4 come with friends to HiVE to learn more about the work of REED and to partner with us to end the sexual exploitation of women in our community. Guests will arrive to acoustic music and appetizers and will have the opportunity to purchase local craft beer from our sponsor Parallel 49. Craft beer prize packs will be raffled at the end of the night.

Over 18 is a documentary about pornography which will be showing at several churches in the area during November. The film, produced by Hope for the Sold (which also made Red Light Green Light) is “a feature-length documentary to combat pornography addiction among children and teens.”

← British physicist will address science, religion and wisdom
Medical Assistance in Dying: We are now on the slippery slope →