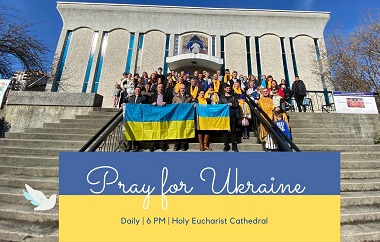 Churches and ministries are working hard to help Ukrainians, both locally and in Ukraine and the neighbouring nations.

Ukrainian churches are leading the way. Here are just a couple of examples that have been noted by the media:

A CTV News story described how Holy Eucharist Cathedral in New Westminster has been helping Ukrainians fleeing the war:

A church in Metro Vancouver is expanding its daycare program in preparation for families arriving from Ukraine.

The upper level of the Holy Eucharist Ukrainian Catholic Cathedral in New Westminster used to be for the choir, but now it’s a childcare space. 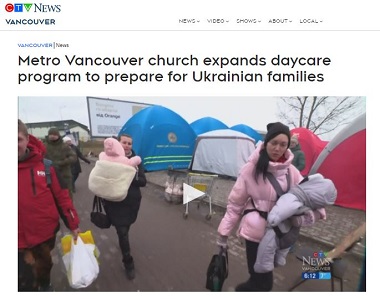 “Most of those fleeing the war in Ukraine are women and children,” said Rev. Mykhailo Ozorovych, pastor at Holy Eucharist.

“We’re trying to expand our program that we have here at the church so we can have a little more children and we’re trying to get another location.”

The parish has been a driving force in Metro Vancouver since the invasion of Ukraine first started.

It’s raised more than $100,000 to purchase aid such as military clothing and medical supplies to send to Europe, but efforts are now turning to setting up local supports such as housing.

Go here for the full story and video. (I visited the church and posted a story March 3.) 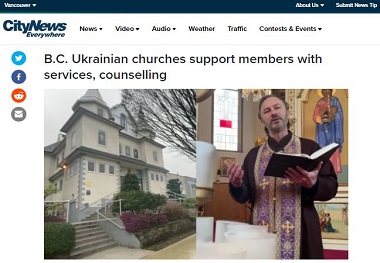 Here is a portion of their article:

Ukrainian Churches on the Lower Mainland have started offering daily services and counselling to help members cope with fear and anxiety over Russia’s invasion of their home country.

On Monday morning, Father Roman Tsaplan of Holy Trinity Ukrainian Orthodox Cathedral got a text message from a church member worried about their family in Odessa. The port city has been bracing for Russian forces.

The reverend scheduled them for counselling hours later. He’s familiar with their fears, as he’s been checking on his 81-year-old mother in western Ukraine.

“It helped me a lot to understand people because I’m going through all of this,” he told CityNews. “My mom had been in shock, very emotional, crying, worried about children, grandchildren. It was a very difficult and painful time for me, I’ve never seen my mom in this condition.”

Go here for the full article and video. 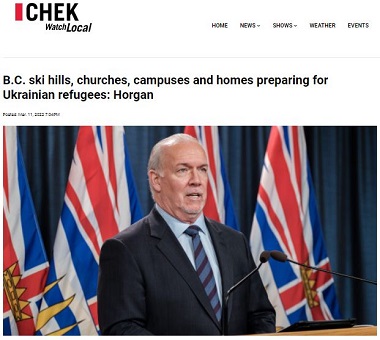 Premier John Horgan announce March 23 that the provincial government will provide an extra $500,000 for the relief effort.

Horgan said [March 11] he met with Ukrainian community leaders and spoke earlier with refugee settlement agencies and some faith groups about plans to meet the housing, health and transition needs of those fleeing the war. . . .

B.C.’s Ukrainian community leaders said housing will be the top issue for arrivals and discussions are underway to possibly use rooms at ski hills and university campuses, or in churches and people’s homes as a refuge for those who have left Ukraine, said Horgan.

All the Ukrainian churches are welcoming support from other churches.

Many other local churches and ministries are helping out in their own way. Just a few of many examples: 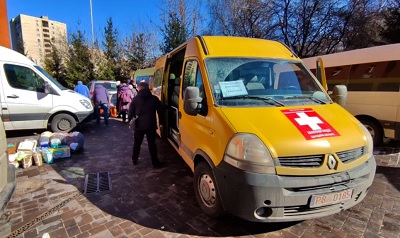 * Coastal Church has partnered with Livets Ord (Living Word) Church in Uppsala, Sweden with financial aid to Ukraine. To date, they have raised nearly $100,000 in response.

* South Delta Baptist Church: “Our Fellowship International missionaries, Pierre & Hanna Jutras and Ben & Krista Taylor, along with their church partners have been able to set up two emergency shelters at churches in the towns of Hrubieszów and Zamosc in Poland near the border with Ukraine.” Fellowship Baptists nationally have raised over $400,000.

* Hungry for Life International, based in Chilliwack. Chad Martz (and wife Mary) remain in Ukraine supporting people. March 18 post: “To each and every person who had it on their heart to donate to war relief in Ukraine: “You provided FOOD for many mouths. You provided SAFETY and warmth for those in transition. You provided FUEL for vans delivering food. You provided SHELTER for orphans. YOU RAISED ONE MILLION DOLLARS!!!”

* Stella’s Voice Canada, based in Langley: “While doing all we can to help refugees fleeing Ukraine, including opening our homes in Moldova to them, the expense of day-to-day life continues for those in our care in Moldova.” 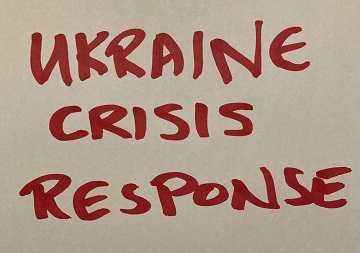 Two Metro Vancouver communities which work with asylum seekers / refugee claimants are reminding us of the bigger picture, even as they welcome displaced Ukrainians.

Both Journey Home and Kinbrace joined with Multi-Agency Partnership BC (MAP BC) for an online presentation March 15 which focused generally on “the precarious housing situation for refugee claimants, and what it takes for more groups to step up and be that ‘transformative place.'”

Loren Balisky, Director of Engagement for Kinbrace, has posted a couple of blogs to put things in perspective.

The first, ‘Use the right language – displaced Ukrainians, not Ukrainian refugees,’ includes this:

Right now, Ukrainians fleeing into other countries are technically not refugees.

They are forcibly displaced people or asylum seekers: people outside their country, seeking safety, but not refugees in the legal meaning of the word.

Under international refugee law, with its roots in 1951 Convention Relating to the Status of Refugees (Refugee Convention), a person becomes a refugee when either the United Nations High Commissioner for Refugees (UNHCR) or the safe country they are in verifies their refugee status through an independent legal process. Getting ‘Convention Refugee’ status is a powerful protection under international law.

It takes refugee claimants in Canada months, and sometimes years, to get Convention Refugee status. It doesn’t come cheap. . . .

The second is ‘New safety pathway to Canada for Ukrainians bypasses refugee convention.’ Here is a portion:

In response to the now more than three million Ukrainians who have fled their country into Poland, Romania and other neighbouring countries, the Canadian government introduced the Canada-Ukraine Authorization for Emergency Travel.

This special measure “offers Ukrainians and their family members free, extended temporary status and allows them to work, study and stay in Canada until it is safe for them to return home.”

As perfectly appropriate to the situation this is, it is an extraordinary, unprecedented offer by Canada to a population that is forcibly displaced.

I sincerely hope this is the way of the future – a timely, open-door response that fast-tracks people from forced displacement to safety with few barriers in between.

Both Journey Home and Kinbrace continue to work with a wide range of asylum seekers and are concerned that other displaced persons – especially Afghans and other non-Caucasians – will be overlooked. 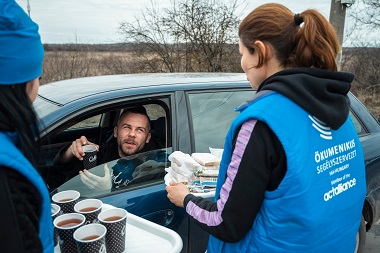 A March 22 press briefing by ACT Alliance and the World Council of Churches confirmed the essential role of churches on the ground in Ukraine and in surrounding nations.

Here is a portion of the report accompanying a 45 minute video:

A delegation from the World Council of Churches (WCC) and ACT Alliance  shared their observations from a recent trip to Hungary, Romania and Ukraine, where they witnessed firsthand both urgent humanitarian needs and a robust church response.

“You see the consequences of war which is forcing millions of people to leave their land,” said Rudelmar Bueno de Faria, ACT Alliance General Secretary, noting the heightened risk for human trafficking and forced labour.

“We heard from ACT members and from church workers that the first wave of refugees were mainly people with healthy financial situations and good connections in Europe,” he said, while a second wave comprised people with fewer resources.

“The third wave we are facing now is of people without any resources,” he said. “During the visit we could see the distinctive role that church and faith-based organizations played in the emergency response so far.”

Prof. Dr Isabel Apawo Phiri, WCC deputy general secretary, said that the reason church response is able to happen is because many churches are well-equipped structurally to quickly turn compassion into actions that address human need, wherever it occurs. . . .

ACT Alliance (Action by Churches Together Alliance) is the “largest coalition of Protestant and Orthodox faith-based actors working on humanitarian, developmental and advocacy issues”; it is active in more than 125 countries.

Go here for the full report and the video.

← Niels Henrik Gregersen: ‘I see no barriers to faith in contemporary science’
Creating Conversation: ‘We are called, first and foremost, to pray’ →