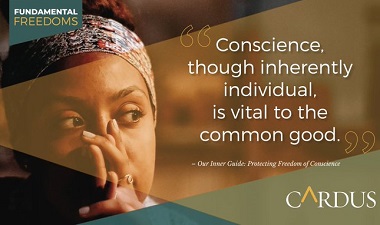 Bird, who teaches at UBC’s Peter A. Allard School of Law, has made the case for several years, but says that several current BC disputes illustrate the need clearly.

‘When conscience is attacked’

Writing in Public Discourse October 10 (‘When conscience is attacked, the ground beneath us shakes’), he said:

Many say the Canadian election last month achieved nothing, that the country is back to where it was before. There’s a lot of truth to this statement. The new seating map for Canada’s Parliament is almost a carbon copy of the old one.

But the election was far from inconsequential. The conscience rights of doctors suffered a major blow. During the campaign, every major national party in Canada refused to support doctors who decline to refer for procedures they consider harmful to patients or third parties.

Canada’s political leaders, it seems, have much to learn about freedom of conscience. 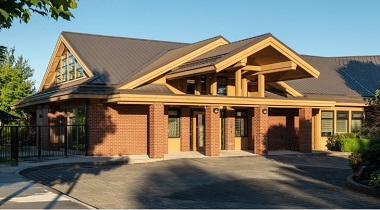 The Irene Thomas Hospice lost provincial funding because it refused to allow euthanasia.

He also referred to several situations in British Columbia:

The Irene Thomas Hospice, a private healthcare facility that declined to offer euthanasia for ethical reasons, was shut down by public health authorities this year.

Star of the Sea Parish, a Catholic community that refused to rent its event hall for a Pride fundraiser due to the community’s beliefs on marriage and family, is being sued by an LGBTQ group.

And Shahdin Farsai, a lawyer who questioned the wisdom of obliging all lawyers and litigants to identify the “correct pronouns” by which they should be addressed in the courtroom, was canceled by the court of public opinion.

(The Christian Legal Fellowship and the Evangelical Fellowship of Canada have been granted leave to intervene in Klassen obo White Rock Pride Society v Star of the Sea Parish, which will be heard before the BC Human Rights Tribunal.) 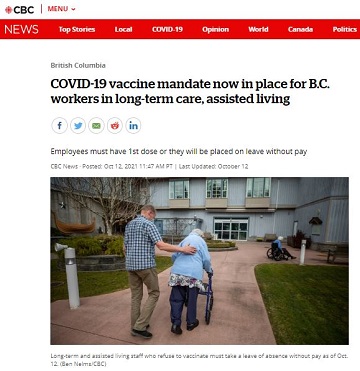 Equally current are situations related to the pandemic. Provincial Health Officer Dr. Bonnie Henry mandated that all long-term care and assisted living workers who had not received at least one dose of vaccine against COVID-19 by October 12 would have to take a mandatory leave of absence without pay.

Stephen Quinn addressed the situation at one Christian institution on The Early Edition October 12. Here is a portion of the article based on that interview:

Karen Biggs, chief executive officer of Menno Place, a care home in Abbotsford, B.C., where 700 seniors live, says she is losing about nine employees out of 675 because they are not willing to vaccinate.

Biggs said some staff have also chosen to retire early, while 19 casual employees who do not have permanent positions but work on a have-need basis have also refused a jab.

“The ones who are anti-vaxxers, of course, are very, very upset,” said Biggs.

“Some employees have worked with us for 14 years, 20 years, and they’re choosing to walk away from their pension and their benefits by doing this,” she added.

And in Quebec, Health Minister Christian Dubé asked that all professional orders in the health sector suspend the licences of workers who aren’t immunized. The president of the Quebec Order of Nurses said they would carry out those suspensions by October 15, though Dubé has now granted the unvaccinated an extra month to comply.

Bird pointed to a new report by the Canadian think tank Cardus: ‘Our Inner Guide: Protecting Freedom of Conscience.”

The first is when a person refuses, because of conscience, to perform an action that happens to be lawful: the soldier who declines to work at a concentration camp, the pacifist who will not bear arms, or the physician who refuses to euthanize a patient.

The second is when a person refuses to do something that would endorse a belief or cause that she conscientiously disagrees with: the journalist who opposes a directive to publish state propaganda, the public official who refuses to take an oath containing statements that he considers dangerous or untrue, or the politician who votes against legislation that she deems gravely harmful to the common good.

How, in a liberal democracy, should we handle these scenarios? When must conscience give way to other considerations in the public square? When should conscience take precedence?

This paper tackles these questions. Even when considering these questions, can we accept the fundamental premise that all of us would wish, if we were to find ourselves in any of the scenarios described above, to be free to follow conscience? We at Cardus would argue in favour of such an assertion: that this hope is common to all of us.

How can we accept this as objectively true? Because of the immense value that we, as human beings, innately ascribe to living integrally. It is only reasonable, then, that we should support fellow citizens who find themselves in these scenarios – even if we disagree with their convictions of conscience. All of us naturally hope that our fellow citizens would afford us the same treatment if ever the tables are turned.

Article 1 of the Universal Declaration of Human Rights captures this idea well by not only affirming that all human beings “are born free and equal in dignity and rights” but also, fittingly for the topic at hand, that they are also “endowed with reason and conscience and should act towards one another in a spirit of brotherhood.”

This outlook should be embraced by all citizens for the sake of individual flourishing, peaceful coexistence and liberal democracy itself. This paper makes the case for that destination, and explores how we can get there.

We aim to raise awareness of the value and significance of freedom of conscience in a liberal democracy, alert Canadians to the pressing need for this human right to be afforded due respect and protection, and propose ways in which that respect and protection can be cultivated and achieved.

Go here for an overview of the report and here for the full 30-page report.

Several recent articles in The B.C. Catholic have raised the issue of conscience. 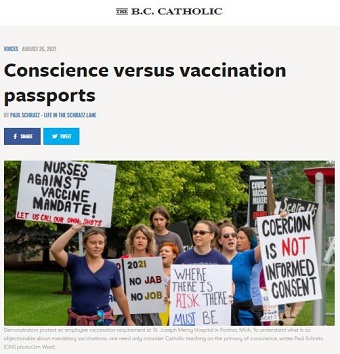 [Dr. Bonnie] Henry is asking faith leaders to encourage “only immunized people” to attend services, but has so far has stopped short of mandating it. “Those are decisions that faith leaders, communities, church groups, choirs, make for themselves; they don’t need an order from me to do that.”

We can only hope she’s more reliable in holding to those words than she was on passports and exemptions.

Most Canadians have apparently been in favour of the ominous notion of mandatory vaccinations since the start of the COVID. But in the past year, ethical debates about forced injections have largely been replaced with discussions on how best to carry them out.

To understand what is so objectionable about mandatory vaccinations, one need only consider Catholic teaching on the primacy of individual conscience and forming one’s conscience accordingly.

Yoshioka’s comment was a response to the Schratz piece. He said:

Conscience rights in Canada have been under attack for years. So it is understandable for social conservatives to be on high alert for any further threats to our legitimate and intrinsic rights. However, certain watchdogs don’t know how to stop barking. . . .

Catholic teaching, along with the Charter, calls us to broadly consider all the issues at hand. Conscience is not a warrant for unfettered autonomy but a call to responsibility and virtue (CCC 1792, 1781).

Klassen responded to both the Schratz and Yoshioka comments.

Protestant churches have been compliant with government demands, in general, but there are some differences in approach.

For example, Mennonite Church Canada leaders (including Garry Janzen from BC) issued a statement recently:

‘There is nothing in the Bible, in our historic confessions of faith, in our theology or in our ecclesiology that justifies granting a religious exemption from vaccinations against COVID-19,’

These coercive policies are having real-world consequences for Canadians. Some people are expecting to lose their jobs while others may be forgoing post-secondary education, as just two examples.

Anger and resentment is festering. It is very apparent that we are living in a different social and political-legal climate than just two years ago. Yet, as Paul says, “We are perplexed, but not driven to despair.”

They conclude with several suggestions about how to respond.

I have posted several articles about the Forgotten Freedoms of the Charter. Here is the beginning of one:

Two British Columbians, including a new faculty member at UBC’s law school [Brian Bird], made significant contributions to a valuable series of videos on The Forgotten Freedoms of s. 2 of the Charter.

Co-presented by the Christian Legal Fellowship (CLF) and the Forgotten Freedoms Project, the series, released earlier [in 2020], “explores fundamental freedoms which have been largely overlooked in Canada.”

The four Forgotten Freedoms videos (and an introductory video) address these issues one by one.