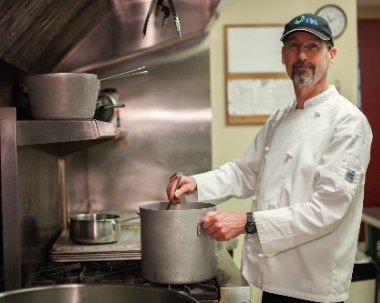 Mike Miller has been in charge of the kitchen at UGM New Westminster for 19 years; he will tell his story at the 75th anniversary gathering.

Twenty-one years ago Mike Miller stepped off the bus in Vancouver with nine dollars in his pocket, looking for a fresh start. Despite his desire to break from his addiction and move forward in life, he ended up homeless, sleeping in a newspaper bin behind Kingsgate Mall.

Fortunately, his story did not end there. On September 26 he will address the legacy that brought him to where he is today, at Union Gospel Mission’s 75th anniversary celebration. Gratitude Live will be held at Glad Tidings Church in Vancouver.

During Miller’s first two years in the city, he was caught in an all too familiar cycle of drinking away pay cheques, finding shelter on people’s couches, losing work and finding sustenance by eating meals at UGM.

“I’ll never forget my first meal at UGM,” says Miller. “The cooks really went out of their way to make their food robust and tasty, because they had a huge heart for people. I was pretty impressed by that.”

After his uncontrolled drinking lost him another job, Miller, feeling the crush of defeat, turned to UGM for a meal and found something better – a space in the Alcohol and Drug Recovery Program. He immediately sold his belongings and on August 19, 1996 he took up residence at UGM. He began the fresh start he had hoped for during his move to Vancouver two years prior.

Today, Miller is 19 years clean and sober and runs the kitchen at UGM New Westminster – a kitchen he has worked in since he graduated from the recovery program.

Miller is just one of thousands who have been changed through UGM since its humble beginning in September 1940. Since then, UGM has grown from a small soup kitchen in an upstairs facility at 10 Powell Street, to seven locations across Metro Vancouver. This includes UGM’s newest facility, 601 East Hastings, a six-floor multi-purpose facility which, in 2014, provided 320,000 meals, 28,000 nights of shelter and housing for 101 people.

To celebrate their diamond jubilee, Union Gospel Mission is hosting “Gratitude Live,” an evening of stories, music and community. This milestone event honours the legacy of work that UGM has offered across Metro Vancouver, providing support to those struggling with homelessness, addiction and poverty.

“This is a historic year for us,” explains Bill Mollard, UGM’s president since 2008, “and we want to pause and reflect with gratitude on this legacy. UGM began in response to the circumstances plaguing so many after the Great Depression. Since 1940, the faces have changed and the issues have become significantly more complex, but thanks to the care and concern of so many, UGM has been resourced to adapt, providing an evolving continuum of care to meet the needs of those on the margins today.”

Miller, who has given back exponentially in his 19 years of sobriety, explains how he tries to create a positive dining experience for guests whose stories reflect his own.

“I love the fact that each day I am able to provide a nutritious base, which can be the first step towards recovery or other steps. If you can serve a meal with compassion, you can impact people. It’s not so much the food – the food is great! – but it’s vital that it’s provided with heart. That provides the first step on a bridge to change.”

There is no charge to attend Gratitude Live, but UGM is asking those who would like to attend to RSVP at celebrate75@ugm.ca.