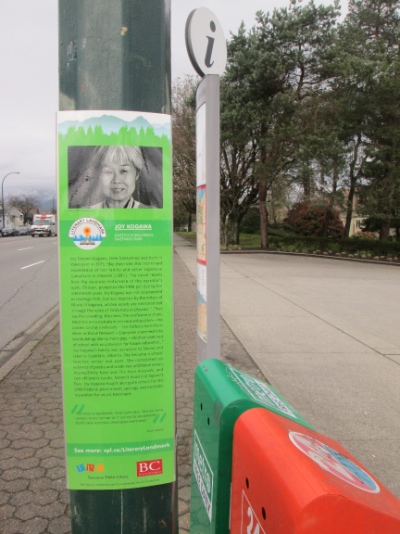 Joy Kogawa’s Literary Landmark is at the northeast corner of Renfrew and Hastings.

The Vancouver Public Library and BC BookWorld have joined forces to install permanent literary plaques around the city. The Literary Landmarks project was launched with 26 authors this month; more will be added next year.

Some of the featured authors are household names.

Margaret Atwood is recognized by a plaque on the 3800 block of West 11th Avenue.

From the Literary Landmarks site:

One of Canada’s foremost authors, Margaret Atwood, lived near here in 1964-1965 while working as a lecturer at UBC. “It was a wonderful breakthrough year for me,” she has recalled.

“In it, I finished writing The Circle Game and wrote all of the draft of The Edible Woman. . . . I loved the entire year and the only reason I didn’t stay was that I felt I had to go back and complete the work for my PhD or I would always be an academic floorscrubber.”

Douglas Coupland has a plaque on a lamppost at the corner of Richards and Davie downtown. This is from the site:

In 1987, Douglas Coupland had a solo sculpture show at the Vancouver Art Gallery called Floating World and he began describing his own ‘twentysomething’ generation for Vancouver magazine, an urban lifestyles magazine edited by Malcolm Parry, at this location. . . .

Eventually Coupland went to Palm Springs and completed his breakthrough novel Generation X: Tales for an Accelerated Culture, rejected by 15 Canadian publishers and 14 American publishers before it appeared in March of 1991. 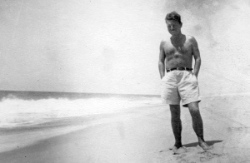 Malcolm Lowry is remembered by a plaque on Beach Avenue at Burnaby Street in the West End. Here is his write-up:

Malcolm Lowry was an alcoholic novelist whose relationship to Vancouver – and much else – was uncertain, though there is no doubt that he did his best work here. In Under the Volcano, arguably the most famous novel ever written in British Columbia, he offhandedly refers to Vancouver as a place “where they eat sausage meals from which you expect the Union Jack to appear at any minute.”

During his 14 years in the Lower Mainland, mainly in North Vancouver, Malcolm Lowry briefly resided at three West End locations giving rise to his poem, ‘Lament in the Pacific Northwest,’ about the Haywood Bandstand, at English Bay, which was built in 1914 and restored in 1988.

One world-famous pair that I didn’t realize had any connection to Vancouver are Raymond Hull and Laurence J. Peter, authors of The Peter Principle. Some of the others recognized with Literary Landmarks are Margaret Laurence, George Bowering, Evelyn Lau, Jane Rule and W.P. Kinsella.

There are some connections to the Christian community. 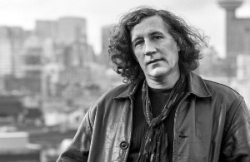 Bud Osborn was a priest, a prophet and a poet. Photo: Barry Peterson and Blaise Enright

Bud Osborn is described as “a superb poet” and “an unofficial archivist of Canada’s poorest neighbourhood.”

But he was also a follower of Christ. As Brian Walsh said of him:

We have lost a priest, a prophet and a poet.

A priest because he mediated the pain of the most vulnerable,
bringing it before the throne of God.

A prophet because he proclaimed to the powerful the cries and demands for justice.

A poet because through his words he gave voice to what was inarticulate,
and engendered an alternative imagination of hope in the midst of the pain.

Joy Kogawa is the author of several books, including the novel Obasan, in which a teacher remembers the trauma experienced by her family and community as Japanese-Canadians were interned and displace during the Second World War. Ogawa’s father was an Anglican priest and she contributed to Shouts and Whispers: Twenty-one Writers Speak About Their Writing and Their Faith.

Kogawa’s childhood home at 1450 West 64th Avenue has been preserved as a historic literary landmark.

Ethel Wilson was born to Methodist missionary parents in South Africa in 1888, moving to Vancouver as a teenage orphan to live with her grandmother. She went back to England before returning to Vancouver. Her fiction, which was published between the late 1940s and early 1960s, clearly owes a significant debt to her Christian upbringing.

Andreas Schroeder is described as “ex-Mennonite” and that certainly accords with his own amusing web bio:

. . . We then moved to Agassiz, BC where a considerable number of my relatives had already settled. Since the nearest Mennonite church was across the Fraser River in distant Chilliwack, we formed our own impromptu congregation, led by my grandfather Heinrich Bartel. Since each of its 67 members was either my aunt, uncle, or cousin, I was effectively saddled with an additional 25 mothers and 25 fathers – each one of whom considered it their God-given job to monitor and correct my behaviour at every opportunity.

Disaster struck in 1957 when the cows on our small dairy farm became infected  . . . and we didn’t have the money to start again. We sold what was left of the farm and moved to Vancouver . . .

My family’s loss was my personal gain. Vancouver had a lot fewer Mennonite spies per square block, and astonishing cultural facilities like public libraries, theatres and even nightclubs.

Much of the vision and content for the Literary Landmarks site was provided by Alan Twigg, who is best known as the publisher of BC BookWorld and who recently became a member of the Order of Canada:

Way back when, I wrote a book for Vancouver’s centennial in 1986 called Vancouver & Its Writers: A Guide to Vancouver Literary Landmarks. At the time, the city had only the Pauline Johnson memorial in Stanley Park so I allocated sites around the city for fiction writers. It was an exercise in wishful thinking. There were no plaques – it was just an idea to propagate an awareness that we have a rich literary history.

Twenty years later, the leadership of Vancouver Public Library and Dr. Yosef Wosk has resulted in 26 landmarks, with more to come.

This progress makes me think of some lines at the end of a satirical poem that Earle Birney wrote here in 1947: “no Whitman wanted / it’s by our lack of ghosts / we’re haunted.” Now our city literally boasts thousands of authors and BC easily qualifies as one of the most active literary societies on the planet.

This is progress as much as skyscrapers and high property values.

Twigg has produced BC BookWorld since 1987. He also writes and manages ABCBookWorld, a separate public reference service for and about more than 10,900 British Columbia authors.

(When I emailed Alan to point out that there are not many Christian authors on the database, he said he would be happy to hear from those who would like to be listed. Just send biographical and bibliographic info to him directly, at bookworld@telus.net, with a Jpeg headshot. “The important thing,” he said, “is to stress that it should not be overly self-promotional. Facts rather than hype. Include only information that will remain accurate if I am run over by a bus; or if the same bus hits the author.”)

In 2014, he launched BCBookLook, “an omnibus news hub for BC literature that provides a wide range of original materials such as videos, audio interviews, blogs, bestseller lists, lengthy essays, excerpts, theatre reviews and event information.”

If you would like to suggest an author for a future Literary Landmark, contact the Vancouver Public Library: info@vpl.ca or phone 604.331.3606.

← Around Town: Waiting for Pope Francis, UBC’s Papal Bull, Neighbourhood Grants
The Whipping Man: Observing Passover in the shadow of slavery and war →