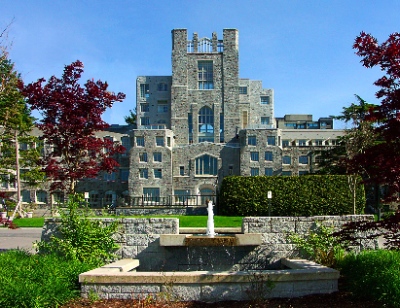 While the Vancouver School of Theology (VST) $28 million sale of the iconic Iona Building ‘castle’ to the University of British Columbia is significant news, VST principal Richard Topping suggests there is more to the story.

The ‘more’ relates to the changing scene in Canadian theological education – particularly the increasing role of online learning and expanded educational services to present and future ministers and faith leaders.

Dr. Topping is a minister who pastored one of Canada’s largest Presbyterian churches, did most of his theological studies at Wycliffe College, Anglicanism’s evangelical seminary at University of Toronto, and earned his PhD from St. Michael’s College, a Catholic institution also at the UofT. 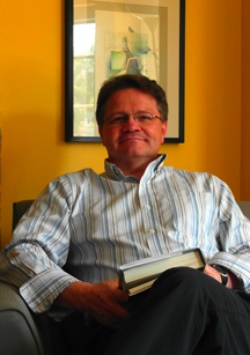 (The congregation he served as senior minister from 2000 to 2009 was the Church of St. Andrew and St. Paul in Montreal. He moved to the west coast in 2009 to become professor of studies in the Reformed Tradition at St. Andrew’s Hall. He became principal of VST this past summer, while retaining the Reformed Studies role.)

Topping asserts: “We have the incredible opportunity to construct a purpose designed facility to advance thoughtful, engaged and generous Christian faith for the 21st century.”

Amplifying on that statement, he notes that the student body, at present, is 115, but draws from a range of faith backgrounds, including the school’s participating bodies – the United, Presbyterian and Anglican traditions.

The landmark stone-faced 100,000 square foot building topped by an imposing tower and featuring stunning views to the north, was built shortly after the 1925 church union. That union brought together the Methodist, Congregational and a large section of the Presbyterian denominations in Canada.

That original Iona was known as Union College. Growing up around them in subsequent years were the Anglican Theological College (ATC), St. Andrew’s Hall (Presbyterian) St. Mark’s / Corpus Christi College (Catholic) and Carey Centre (Baptist). Regent College came into existence in 1968 but, before it moved into its own building across campus, it occupied one wing of Union College.

UBC plans to make the Vancouver School of Economics, which operates under its Faculty of Arts, the main occupant of the towered building. According to Gage Averill, UBC Dean of Arts: “This will generate great excitement for the Faculty of Arts. The magnificent Iona building is ideally suited for the UBC Vancouver School of Economics. It is a treasure that will provide an inspiring setting for our faculty and students.”

VST was formed in 1971 from the merger of Union and ATC. Later, St. Andrew’s affiliated. “Interestingly,” Topping says, “space in St. Andrew’s will be used to accommodate some of the classroom and faculty to be moved from the Iona Building.” 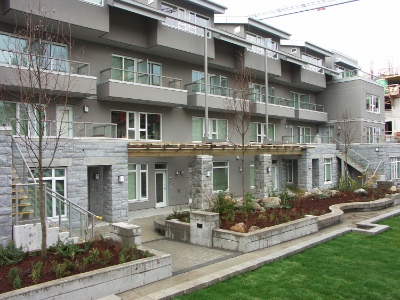 Somerville House may be renovated to accommodate VST activities.

He added that “[VST] was using about one-quarter of the Iona Building in recent years.” He said that while final plans are still in process, Somerville House, a smaller structure in the north part of the “neighbourhood” may be renovated to permanently accommodate VST activities.

Somerville House was built on the site of the structure which originally housed ATC, near the Chapel of the Epiphany, which remains a worship centre for the complex – and home to University Hill United Church.

Alternatively, a new structure may be built, equipped in a fashion that recognizes the breadth of theological interests that exist around the Pacific Rim. As a Pacific-facing institution, that emphasis is significant, says Topping.

All the theological facilities on and around Iona Drive form what is known at UBC as the Theological Neighbourhood. While each institution maintains its independence, the arrangements they have in common are governed by a covenant.

Amplifying on its plans, a VST release notes that the school leaders plan “to use the proceeds of the sale to continue its existing operations as a theological college at UBC,” by: 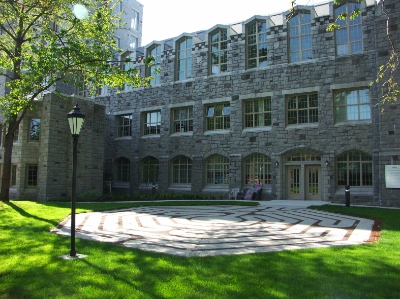 The south side of the Iona Building, with a labyrinth.

The Iona Building sits on UBC-owned land leased to the theological school for 999 years. UBC plans to take possession this coming July, with a view to beginning use for the economics school in the fall of 2015.

VST first approached UBC with the purchase idea in 2012, having concluded that the venerable structure was, in Topping’s words: “no longer suited to the school’s new programming, and that different facilities were needed.”

For its part, UBC leadership sees the VSE as “a global centre for research and hands-on learning about pressing economic issues.” It claims VSE is one of the world’s best schools of economics, adding that in a recent ranking based on research publications, it placed “in the top 20 worldwide, and number one in Canada.”