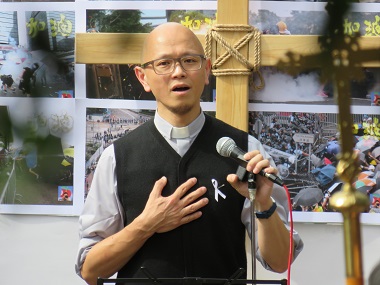 More than 500 people gathered Sunday afternoon (June 16) to take part in a prayer rally for Hong Kong outside the Chinese Consulate on Granville Street.

Organizers describe themselves as “a group of Christians in Vancouver who are concerned about Hong Kong. We are committed to promote love, peace and justice in Hong Kong through prayer and other social actions.”

Rev. Antony Law (Mennonite Brethren) gave an exhortation from the beatitudes, then likened people in Hong Kong to those who mourn, those who are persecuted . . .

Leaders read several long passages of scripture and led those assembled in several songs – including ‘Sing Hallelujah to the Lord,’ which has become particularly significant during the massive Hong Kong demonstrations over the past month (see below). 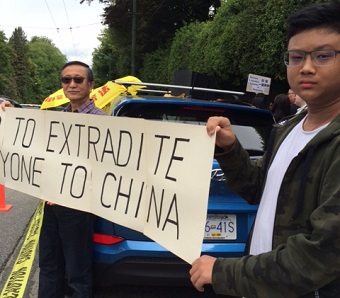 Bill Chu has been active in several justice causes, and has attended several Hong Kong-related events in front of the Chinese Consulate recently. Here he gives credit to some of the Christian leaders who have been peacemakers and who have persecuted in Hong Kong. He also provides some background which helps to explain the size and nature of the demonstrations.

Although there are plenty of examples of civil disobedience in the Bible, from the Hebrew midwife who refused Pharaoh’s order to kill baby Moses, to the apostles who disobeyed orders to keep silent about Jesus, such has not been a practice among most Chinese Christians.

However after Hong Kong’s return to China in 1997, its democratic base has been steadily chipped away and Christians there are reflecting more deeply about the nature of their society and what kind of engagements are necessary to ensure its future.

On August 31, 2014, China reneged on its promise to allow Hong Kong’s Chief Executive to be elected in 2017 by universal suffrage, and stated that a 1,200 person nominating committee would pick two or three candidates, who would then be voted on by the people. 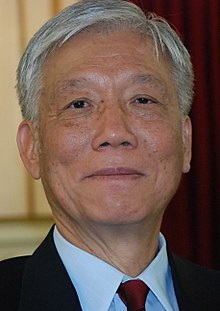 Before freedom disappeared, three Hong Kong Christian leaders felt a great need for the society to cling onto its core values, so as to promote a constructive return towards democracy.

They are Benny Tai, a law professor, Chan Kin-man, a sociology professor, and Rev. Chu Yiu-ming, the white-haired retired pastor of Chai Wan Baptist Church, with whom I had the honour of having lunch when I visited Hong Kong in December 2015.

These three suggested Occupy Central in early 2013 and spent a year and half in teaching, sharing the vision and asking all participants to sign a covenant before kicking off the first major civil disobedience movement in Hong Kong on September 28, 2014.

It is often referred to as the Umbrella Movement due to the sea of umbrellas used to shield participants from pepper spray and tear gas canisters. The Christian motto they developed for the movement was “Let love and peace occupy the Central District.”

Huge crowds subsequently set up tents in the Central District and managed to occupy it for 79 days. However, shortly before that, the three leaders sensed there was no potential for resolution with the government, while large number of students and youths developed their own directions. So, after urging the students to retreat, to put down deep roots in the community and transform the movement, they turned themselves in to the police on December 3, 2014 – as they had covenanted – but were released soon after.

Compared to what happened in Hong Kong one week ago (June 12), the Umbrella Movement was relatively peaceful. Though it did not change Pharaoh’s heart, it nurtured a strong sense of civic responsibility and solidarity among the people, which turned out to be crucial for the peaceful but awe-inspiring massive marches in Hong Kong June 9 and 16.

In 2017, almost as soon as Carrie Lam took office as the new Chief Executive, two prominent student leaders were sentenced to jail, followed by 13 other activists. In April 2019, the Hong Kong government convicted another nine, including the three Christian leaders mentioned above.

Because many in Vancouver were concerned about possible harsh sentencing for these nine, a protest rally was held April 13 outside the Chinese Consulate. I was there carrying a cross [pictured in a Sing Tao Daily story April 14] to symbolically indicate the prosecution of the innocent near Good Friday.

As soon as the Hong Kong court announced their sentences April 24, I helped translate a letter from Lawyer’s Rights Watch Canada to Chief Executive Carrie Lam, objecting to the wrongful prosecution, conviction and sentencing of these human rights defenders for peacefully exercising their internationally protected right to advocate for the right to vote and other democratic reforms.

In memory of Tiananmen 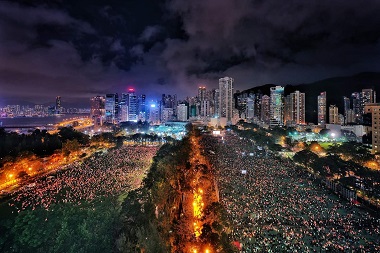 The June 4 candlelight vigil in Victoria Park in memory of Tiananmen Square was massive.

As this year is the 30th anniversary of the June 4 Tiananmen Massacre, Hong Kong folks held a candlelight vigil attended by 180,000, a record in recent years. In Vancouver, I attended a similar local one with 500 people.

Hand-picked by China rather than by the people’s vote, and emboldened by a Legislative Council rigged with a pro-China majority, Carrie Lam tried hard to prove her worth by introducing policies with no or minimal consultation with the people.

The one that has rocked Hong Kong this month is the proposed amendment to its Extradition Law, which would allow extradition  to the People’s Republic of China (along with Macau and Taiwan). It was brought up April 3 and has been seen as the means to undermine Hong Kong’s rule of law and begin a reign of fear.

Upon seeing that the independent Legislative Committee set up to review the amendment had a pro-democracy chair and that its first meeting was terminated by spectacular scuffles within the Legislature, Carrie Lam bypassed the Committee and caused the bill to be sent to the Legislature for debate June 12.

The imminent passage of the bill alarmed Hong Kong people, who joined a protest march June 9. The march was attended by 1.03 million despite the short notice, the sweltering 32C heat and occasional rain. The outpouring of people was so immense that many were stuck inside the huge Victoria Park for hours and the whole ordeal took over seven hours for many.

The whole march ended peacefully at 10 pm. A few hundred, mostly youths, stayed behind near the government headquarters, vowing to continue protesting until June 12.

At 11:07 pm, Carrie Lam announced that the June 12 debate would still take place. Her provocative words, ignoring the will of the masses, angered the demonstrators who then got into a clash with the waiting police. Just past midnight she sent in the heavily armed Rapid Response Team and brutally drove the crowd away, chasing and cornering about 300 of them in Wanchai.

On evening of June 11, many started to congregate at or near the government headquarters. While the air was thick with rumours of what might happen after dark, many Christians – both Protestant and Catholic – responded by joining the people, though the police intimidated many by lining them up and conducting body searches.

For eight or so hours through the night, they sang ‘Sing Hallelujah to the Lord’ in three parts. Some non-believers also joined for an hour or two of singing to seek some peace amidst the increased presence and movements of riot police. (A June 19 Time story is titled: ‘A 1974 Hymn Called ‘Sing Hallelujah to the Lord’ Has Become the Anthem of the Hong Kong Protests.’)

On the morning of June 12, the government HQ and Legislature were surrounded by a sea of concerned citizens wanting to stop the passing of the amendment. Being a weekday, it was mostly youths. But the crowd was so thick that the Legislative Council meeting was called off.

The apparent calm following did not last long; by about 3 pm, the police feigned a retreat causing some youths in the front to move forward. Using the excuse that they were under attack, the police immediately pushed aggressively forward, beginning a brutal crackdown on overwhelmingly unarmed and peaceful people.

While some pastors stood in the front to plead with the police, one officer said, “Ask your Jesus to come down and talk to me.”

From videos, it appears that more than 90 percent of the masses were peaceful, while most of the rest were those on the front line pushed into action by batons and pepper spray raining down on them. Some protesters were dragged along the ground and then beaten by six or seven police. Even journalists complained many of them were beaten or fired at by tear gas. For the first time, police used rubber bullets, as well as shot guns firing lead shots in bean bags. Of the 80 or so who reportedly went to be treated at hospitals (many who needed to did not go), some were arrested inside the hospital.

The Chinese Methodist Church In WanChai opened its doors to anyone seeking refuge; the inside looked like a war zone, with exhausted people lying around, people’s eyes being washed and blood being wiped away.

Carrie Lam criminalized the people on TV that evening by describing the protest as an “organized riot.” The truth is that people were simply reacting on their own to the Extradition Law. The protesters were not “well equipped” as the Chief of Police said later. All they had were bottles of water, masks, goggles, hard hats or umbrellas – no match for heavily armed riot police with shields.

Many people were infuriated by how Hong Kong’s leadership responded to their million-plus march. So on June 16, they marched again. This time two million and one reportedly show up – that one extra person is to pay respect to Mr. Leung, who fell to his  death while putting up a big banner. That outpouring of humanity for a common cause is a peaceful spectacle not to be forgotten.

Thus far, Carrie Lam’s only concession to the people is to suspend the amendment, not to cancel it.

Top religious leaders have joined the growing demands for the city’s leader to scrap – rather than suspend – the polarising extradition bill and to investigate allegations of violence against protesters.

In a joint statement on Wednesday, Cardinal John Tong Hon, the apostolic administrator of Hong Kong, and Rev Dr Eric So Shing-yit, chairman of the Hong Kong Christian Council, called on the government to appease the public by withdrawing the bill and setting up an inquiry into police conduct.

The Christian Council is an umbrella body for 21 churches, including Anglican and Methodist. . . .

What we have observed is that people in Hong Kong since Occupy Central have learned much about showing compassion, taking initiative, networking and generally working towards common good.

Hong Kong owes much to the three Christian founders of Occupy Central, whose selfless dedication has landed two of them in jail, while the third, Rev. Chu, received a suspended sentence due to his health and age. 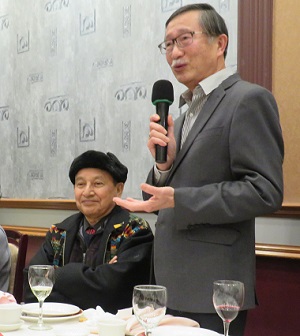 Their teachings and sacrifices have inspired many to place their bodies on the line as a statement from a people about to lose their freedom. May God bless and keep them all.

Bill Chu is supposed to have retired last fall after 30 years of “seeking God’s kingdom,” especially on Indigenous issues, but also on matters related to gambling, the Chinese community and freedom of activity for churches (see story here). He had already retired several years earlier as an engineer.

But he remains very active, particularly of late, on issues related to Hong Kong. He moved here from Hong Kong in 1974.