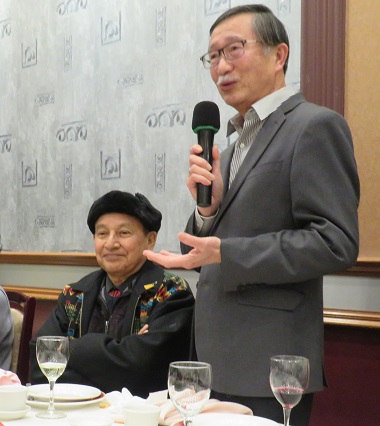 When Bill Chu ‘retired’ from 30 years of activism recently, Grand Chief Stewart Phillip was on hand to praise his work and wish him well.

Friends and supporters joined Bill Chu recently at the Gingeri Restaurant in Richmond’s Lansdowne Centre to celebrate 30 years of activism with Canadians for Reconciliation Society (CFRS) – and his 70th birthday.

Enjoying the multi-course meal with him were co-labourers from several of his projects over the years. Several spoke appreciatively of his work, including Grand Chief Stewart Phillip, head of the Union of BC Indian Chiefs.

Chu, a retired engineer originally from Hong Kong, described how CFRS began on his website:

Chinese Christians In Action Society was founded in 1989 to express its support for the student’s democratic movement in China. In 1990, the Oka Crisis in Quebec forced some of us to think if we were concerned about the ones crushed at Tiananmen Square, shouldn’t we be concerned about those Aboriginals to be crushed at Oka?

That initiated a movement to find the theological basis as well as earthly ways for caring of the world, as those topics were by and large missing in Chinese church teachings. Among our subsequent areas of engagement, the one with Native people led to improved public understanding of their plight in Canada. By 2001, we have witnessed so many major conflicts with Aboriginals in Canada that we were convinced reconciliation with the Aboriginal deserved a focused treatment and CFRS was born in September. 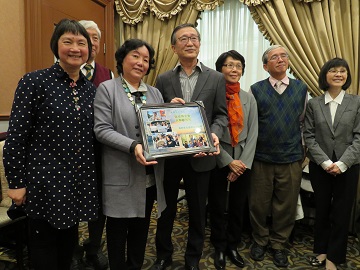 Members of BC Alpha thanked Bill Chu for helping with their work, which preserves the history of WWII in Asia.

At the dinner he followed up on that theme. He referred to some of the CFRS’s other undertakings – “initiating the first major Chinese New Year celebration in a shopping centre, leading the lengthy anti-gambling campaigns, lobbying and stopping Vancouver from imposing a social service use permit on churches serving the poor” – but said he would focus mainly on the group’s participation in Aboriginal issues. 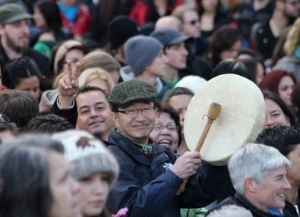 Stewart Phillip referred fondly to this picture of Bill Chu at the Annual Women’s Memorial March for Missing and Murdered Women in 2012, which has been on the UBCIC website.

With the majority of BC’s land mass still without treaties with the original Indigenous nations, acknowledging only the former is alike to me acknowledging that I stole your cell phone, but I am not going to do anything beyond that! Given a chance, I would like to steal the cell phones from other members of your family, and life for me will go on as usual!

So the reason to add the second acknowledgement is to remind the settlers of God’s mandate for his people to seek first his kingdom and his righteousness, and thereby wake Canada up to its original sin.

As he prepared to show some pictures, he said:

• 1 is our one goal of reconciliation.
• 2 is the number of BC minority history we have dug into and publicized.
• 3 is the three levels of government I have engaged with either directly or less directly in the process leading to three formal apologies.
• 4 is the number of Chinese heritage sites in BC I have defended from further destruction.
• 2,000-plus is the number of folks I have brought to Indigenous reserves over the years. 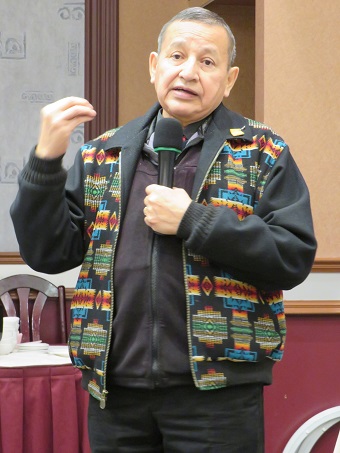 Grand Chief Stewart Phillip attended the meal to honour Chu, even though he had spent a couple of tiring days at the annual BC Cabinet and First Nations’ Leaders Gathering and still had to drive home to Penticton that night.

He said the Union of BC Indian Chiefs (UBCIC) is “enormously grateful” to Chu:

When I think of Bill Chu, the word that comes to mind is ‘relentless.’ Reconciliation is not an event, it’s a lifelong commitment to creating, nurturing and sustaining a relationship. . . .

On behalf of the UBCIC I want to thank you Bill for all your good work over the years. . . . He’s widely known and deeply respected by our people.

Chu said it is surprising that CFRS has achieved as much as it has with “no employees, no office, no money, no fund-raising.” He thanked those who have worked with him, but also acknowledged that replacing him would be an issue if the group were to carry on. He will take it easier now, but several speakers expressed doubts about whether he will really be able to retire.

Chu concluded with these thoughts:

There is also no road map or model that I can follow except those in the good book. It is against all these odds that I was called to start CFRS. For many who stereotype all Christians as narrow-minded or selfish characters who just focus on life after death, they have a surprise now as I have been concerned with life before death as well, and try to manifest God’s will within our culture and history. . . .

[My summary] will serve as a road map of sorts for the younger generation, who still will have to face a society with largely un-reconciled relationships, and with growing populism and nationalism. . . .

Bear in mind though, CFRS has wound down due to succession difficulty; we are not at the end of reconciliation but just the beginning.

Several articles by and about Bill Chu have appeared in Church for Vancouver over the years, including here, here and here. He has been widely covered in the secular press as well. 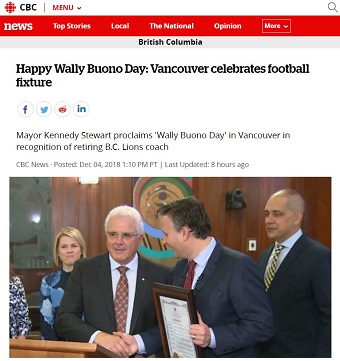 “I’m quite humbled by it,” said Buono. “You do a job that you really love and have passion for, you work hard and do the things you need to do to be successful. To be recognized, it’s appreciated.”

Mayor Kennedy Stewart called the 68-year-old an inspiration to all Vancouverites.

Buono is the winningest coach in CFL history, as well as a former player and general manager.

He spent the final 16 years of his 46 year CFL career as head coach and/or general manager of the B.C. Lions, leading the team to two Grey Cup titles.

Buono is well known for his Christian faith. He spoke with Peter Stockland of Convivium magazine about it last summer:

Convivium: You’re identified as a public Christian. How do balance your visibility as a public person, a celebrated figure in professional sports, and your life as a person of faith?

Wally Buono: I don’t separate them. My little theme is that every day is Sunday. You just don’t use your faith when you go to church on Sunday morning. Your life, your family, your work, everything you do, your faith is a part of it in some way.

As a coach there’s a lot of stress, a lot of pressure. Being a man of faith helps you to put them in the proper perspective. It helps you to be able to cope. A lot of times, it will give you the strength to work through a difficult situation. I’m not in the position where I feel I can preach to the players and coaches in our meeting rooms. It’s not what I’m there for. But they know how, and on what, I base my decisions. They know how I deal with people based on what I believe from the Biblical point of view.

Do I have to keep hammering at you that I’m a Christ follower, or that I believe what the Good Book says? No. I don’t have to continually remind you of that. What I try to do as much as possible is live it. We all fail, and when you fail you have to be willing to accept it and move on, right?

For the Love of God 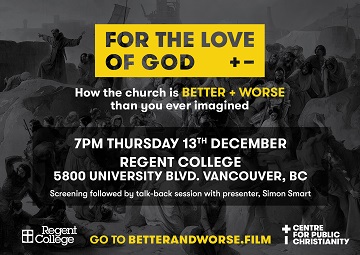 Regent College will feature a film and discussion next Thursday (December 13) which will grapple with what professed followers of Christianity have done in God’s name – and how we might respond. The organizers say:

For the Love of God: How the church is better and worse than you ever imagined is a documentary by the Centre for Public Christianity (CPX) in Australia. It confronts the worst of what Christians have done, while also tracing the origins of Western values like human rights, charity, humility and non-violence.

For the Love of God goes back in time to examine the life and teachings of Jesus Christ to see how one man upended not just his world, but also ours. It travels the globe recounting how the followers of Jesus have actually followed Jesus throughout history – featuring stories such as ‘holy war’ during the Crusades, the German church’s capitulation to Nazism, but also the sacrificial care of the sick at a leper colony in Hawaii, and Martin Luther King Jr.’s commitment to non-violent resistance.

The film showing will be followed by a talk-back session with Simon Smart, one of the presenters.

Every year there are a couple of opportunities to enjoy or sing along with Handel’s Messiah in the lead-up to Christmas. But this year there are several to choose from, and they come in variety of forms, from very professional to some that won’t require much expertise or even singing ability:

For many, the holiday season isn’t complete without a performance of Handel’s Messiah. This year, we bring our beloved production of this time-honoured classic to the Bell Centre in Surrey. Joined by the newly founded Surrey City Orchestra, we celebrate a holiday favourite, in a production that celebrates the depth of local talent we enjoy in the Metro Vancouver area.

The Chilliwack Symphony Orchestra & Chorus invite you to experience the intimacy and drama of Messiah, Handel’s most beloved choral masterpiece. Messiah transcends cultural, geographic, and religious boundaries with its message of charity, peace, goodwill, and sacrifice. It also contains some of the most uplifting, touching, and magnificent music ever composed.

Join us for the Vancouver Bach Choir’s first ever Singable Saturday. Created from a love of sharing singing with our community, we invite you to join us for this free series. You’ll get the chance to sing major choral masterworks with Maestro Leslie Dala and pianist Stephen Smith, alongside new and old friends. Invite your friends! No experience required, and if you don’t read music you’re welcome to come and listen or sing along to the best of your abilities.

Everyone welcome. Scores will be provided. Sponsored by Hominick Music Studio.

← Statement on the Legalization of Marijuana in Canada
Jesus in the Caravan: Daily Advent Prayer Guide (December 13 – 25) →