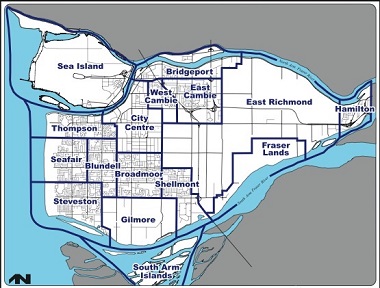 Peter Biggs of The Light Magazine is researching one Metro Vancouver / Fraser Valley municipality each month, and producing a focus on each one. The May issue features Richmond.

Few will be surprised that Richmond is distinct. This low-lying island, notable for being totally flat (only a metre above sea level) has a unique cultural and ethnic makeup.

With a mostly middle-class to upper-middle-class demographic, Richmond politically has voted quite regularly along centrist lines. The city’s politics are well known in the often factious Lower Mainland, for how seldom political upsets or surprises occur. North Richmond has communities with over 90 percent visible minorities. In Steveston – the southwest of Richmond – this figure drops to 43 percent.

The 2016 Census records Aboriginal people accounting for only 0.8 percent of the population (compared to 2.5 percent for Metro Vancouver and 5.9 for BC).

Richmond is home to many totally Chinese-oriented shopping malls, most of them along No. 3 Road. The Richmond Olympic Oval was built for the 2010 Winter Olympics and was originally configured with a speed skating rink. Following the Olympics, the venue was transformed into a community multi-sports park.

SkyTrain’s Canada Line connects both Richmond Centre and the airport to downtown Vancouver and all points in between. It opened in August 2009.

Since all of Richmond occupies islands in a river delta, the city has plenty of rich, alluvial soil for agriculture. Richmond is surrounded by a system of dykes. There is a possibility that, during an earthquake, the dykes could rupture and the alluvial soil may liquefy, causing extensive damage. Richmond is also at risk of a major flood if the Fraser River has an unusually high spring freshet. 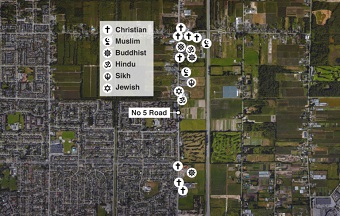 Number 5 Road is nicknamed ‘Highway to Heaven’ as it has a unique row of religious buildings (churches, a Jewish temple, mosques and two of the largest Buddhist temples in North America, along with faith-based schools). It runs north parallel to Hwy 99 after the Massey Tunnel.

Last fall the BBC reported on its distinctiveness, with religious services in English, Mandarin, Minnanese, Cantonese, Arabic, Hindi and Punjabi. 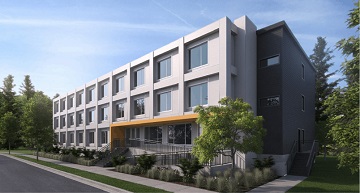 This is what the proposed 40-unit modular housing for homeless would look like.

In partnership with the province, the City of Richmond is set to build 40 homes on Elmbridge and Alderbridge Ways. The city-owned land is currently an off leash dog park. The studio units will each have their own kitchen and bathroom. RainCity Housing will be onsite to connect residents to support services, meals, skills training, healthcare and around the clock oversight.

This initiative has received forceful negative public feedback. However, churches are supportive, as is RUSH (Richmond United for Supportive Housing). Richmond Poverty Response Committee has also expressed strong support for the project. 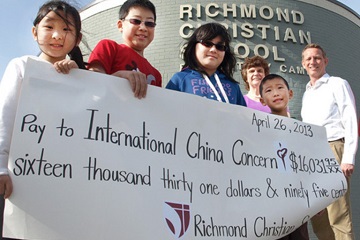 Richmond Christian School has more than 1,000 pupils (preschool – grade 12). The elementary school is situated at a separate campus on Woodward Road.The school has raised over $400,000 for orphanages in three Chinese cities. [The annual Carnival on Friday (June 1) will celebrate RCS’s 60th anniversary.]

Trinity Western University is the first university in Richmond. Situated in the downtown core, it opened in the fall of 2015, offering both undergraduate and graduate degrees. About 400 students study both full-time and part-time at evening and weekend classes. 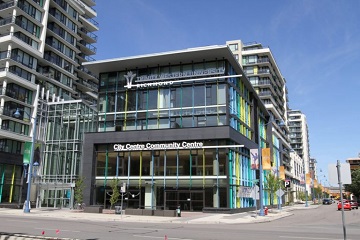 Over 95 percent of our students come from overseas, mostly China. Most do not come from a faith background, but parents choose TWU knowing it is Christian, as they consider it safer. We also partner with Trinity Language Centre, who have approximately 80 students enrolled.

The Asian culture is very collective – they like to ‘blend in.’ Every people group has many distinctives. Asked about how best to relate to the Chinese mindset, Jonathan Chan – lead pastor at Crucible Church –said:

You need to be aware of Confucian values. There is an intense desire be the best in whatever position you are – be it a daughter/son, student, business-person . . . this merges with Christianity. For instance, many Asian churches emphasize intensive Bible study with discipleship linked to how much Bible you know.

There’s a striving for excellence – especially those things that will bring honour to the family. Many Chinese children feel a sense of duty, and many times pick a career path in high end professions for this reason.

Chan also spoke of the ‘salmon’ – those who go away but return to spawn:

Some Chinese churches are bleeding, with an exodus of millennials (25 – 45 year olds). However, now they are having children they are returning to the church because of the underlying ‘family unit’ being important to growing their kids – input from their grandparents, uncles, etc.

This group has waxed and waned; currently there is a new energy. “The ministerial has a whole new generation of pastors with a real commitment to the city and the gospel,” said St. John’s Richmond pastor Sean Love (his church meets at Trinity Lutheran Church). “Three or four years ago a group of us decided we needed to re-invigorate the ministerial with a five minute devotional one of us would give, followed by praying for each other in small groups.”

A second pastors’ group (of 10 or more) also meets at another time as some pastors have an ongoing scheduling conflict. This is facilitated by Stefano Piva, lead pastor at Bethany Baptist Church. 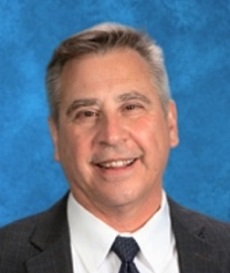 I asked Richmond Christian School superintendent Roger Grose how he sees Christianity in Richmond from his vantage point as a city-wide interdenominational ministry (RCS students come from 140 different congregations). He said:

Many churches are vibrant, with Asian churches doing a great job of evangelism! I meet dozens of parents – often Asian – who tell me their recent story:

I came to Richmond and didn’t know anybody. Someone from work invited me to their church. I met so many happy and friendly people, so I asked if I could come back the next week. I heard the message of the gospel of Jesus for the first time. I cried and cried and knew that was what I wanted. I’ve been going to church ever since!

“There are a lot of young Chinese Christians in Richmond,” Grose added.

Richmond Pentecostal Church’s senior pastor Jim Caruso said, “I had an Iranian man turn up one day and told us that God had revealed himself in dreams to him. He was later baptized – along with his wife and his boss.”

Most Sundays the church gives an ‘altar call,’ Caruso said:

At our recent Alpha Course we had over 100 guests with 13 people becoming Christians. In our neighbourhood we are regularly seeing people coming in and getting saved. One lady with a Buddhist background, after her conversion, destroyed all her statues and idols. She told us she felt so free she phoned [and witnessed to] her friend in Shanghai, China who immediately flew here and was converted!

His congregation of 500 or so has people from 60 different cultures, with Chinese and Filipino being the largest. The church offers real-time translation services.

Brighouse United Church is set for huge changes. As part of a provincial agreement with the BC Conference of the United Church of Canada, the church is poised to build 165 rental homes on its aging and underused property. Half the units will have rent fixed to 30 percent of gross income.

Pastor Stuart Appenheimer told the Vancouver Courier, “A lot of us are sad. I’ve been the minister here for 30 years. But I think there’s some excitement around having a new facility.” The church is now seeking an interim place of worship.

According to the Courier, in order to fit 165 units into the space, the church is proposing to build a 14-storey tower at the rear of the rezoned lot. To either side will be low-rise apartments that will flank the townhouses next door. A childcare centre and church hall will face Bennett Road.

For a detailed look at the Brighouse United development go here.

A word from the mayor

I reached Mayor Malcolm Brodie, who was happy to express his support for the faith community in Richmond: • Thrive Church is headed by pastor JB Lim (who previously practiced law in Taiwan). The church provides Mandarin translation, and is unique as a church plant with growth coming from high schoolers.

“We started meeting in homes with only five people; with the influx of teens we adjusted what we did,” Lim said. The average age of their congregation of 200 or so is 25. “People are open, by last August we had baptized over 100.”

• Crucible Church has recently (October 2017) been ‘replanted.’ They are one of four church plants that meet in the TWU Centre.

Jonathan Chan is the pastor. Academically highly qualified he spent 15 years in the corporate world, but was troubled by a disconnect between the gospel and his work. After completing his MDiv at Regent College, he founded Company of Disciples in 2011, focused on the business community. Crucible Church carries some of this DNA. “Our vision is to reach out to young professionals in the community of city centre Richmond,” he said.

• MT 12 Church also meets at TWU Richmond. A largely Asian church, they re-planted with a small number last April. Previously a recording artist, lead pastor Boz Poon has a remarkable background – coming to Christ whilst serving a four year prison term seven and a half years ago. He connected with Point Grey Community Church and grew in their Commercial Drive campus.

MT 12 has karaoke Friday evenings and a contemporary (rap) worship. The church now sees 50-plus each week. “We’ve lately seen Chinese Triad Gang members and others from the ‘underworld’ coming,” Poon said.

• The Tapestry on No. 2 Road has two services and about 800 attendees in Richmond, along with a further 100 or so each at their Marpole (Vancouver) and Mundy Park (Coquitlam) campuses. We interviewed associate pastor Albert Wu (lead pastor Albert YS Chu is on sabbatical). He said:

We mostly reflect the population demographic around us. The congregation is mostly Asian – second, third and fourth generation. However we’ve seen a recent influx of non-English speakers.

In the Asian culture ‘evangelism’ is better served through hospitality. Along with that the ‘western mindset’ may ask ‘is it true?’ – if it is then they respond positively.

I remember so many ‘intellectual’ conversations with my father {who had not become a Christian]. The ‘apologetics’ approach never swayed him. Then his mother (my grandmother) died and he saw how a Christian handled grief. That caused him to begin to believe. The Asian often says, not is it true, but ‘does it work’ – if it does then it must be true.