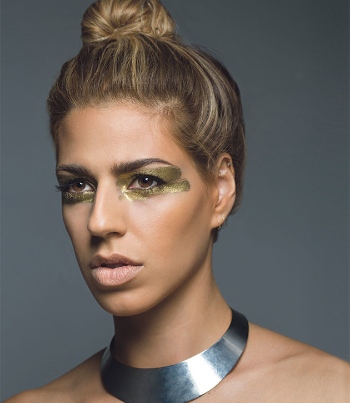 When I noticed that Brooke Fraser was going to be performing at Venue Night Club this Friday (January 23), I thought, wait, isn’t that the name of the Hillsong woman who wrote ‘Hosanna‘ (“I see the king of glory coming down the clouds with fire / The whole earth shakes, the whole earth shakes . . .”) and a bunch of other worship songs? The answer is yes, though it wasn’t obvious from looking at ads for the show, or even at most interviews about her latest album.

Fraser seems to keep her two lives pretty separate, at least while she is promoting her ‘secular’ albums. Here’s an explanation from Timothy Yap, in his review of Brutal Romantic – which came out late last fall – on Hallels, a Christian music website:

Brooke Fraser has . . . evolved from her brand of quirky folk-pop to a full album of experimental electronic pop with this new effort Brutal Romantic. Yet, what’s even more interesting about this New Zealand songbird is that running parallel to her pop music career is her involvement as a writer and worship leader of Hillsong Worship.

What is an enigma is that she has completely kept both career trajectories separate from each other. Under . . . her married name Brooke Ligertwood, she has written some of the Australian mega church’s most cherished worship songs including ‘Hosanna,’ ‘I Will Rise (Beneath the Waters),’ ‘Like Incense (Sometimes by Step)’ and ‘Our Father.’

When she takes on her Brooke Fraser persona, rarely does she ever talk about her Hillsong endeavours. While her Hillsong compositions are rife with gorgeous expositions of scripture, on her own solo outings, God is at best peripheral or designated into the vocabulary of allusions. 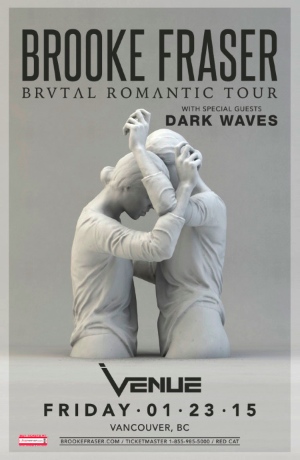 Lydia Jenkin in the The New Zealand Herald puts it this way in an insightful interview:

None of that has changed of course, but with her fourth album, entitled Brutal Romantic, we’re about to see a whole new side of her.

“I really felt that Flags [her third album, released in 2010] was the end of a trilogy for me as an artist. I felt like I’d explored the folk pop singer songwriter world. I knew that I had always set my voice against really warm organic sounds, and I really wanted to experiment with setting my voice against different textures – spiky things and cold things and mechanical things, and bring out the tension and contrast and balance that could be enjoyed if I did that.”

So, if you like Brooke Fraser, you’ll probably enjoy her show at Venue, though you might want to check out ‘Psychosocial‘ from the new album to see how you feel about the new sound – and you probably shouldn’t expect to hear ‘Hosanna.’

No to the Hollywood 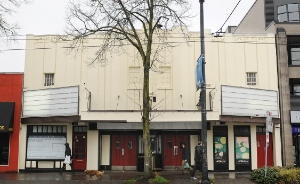 It appears the former Hollywood Theatre will not become a church, at least not in the near future.

Redemption Church has decided not to make the move to the former Hollywood Theatre. The process has been a long one, but pastor Tim Horman announced on a January 15 blog posting that the leadership of the church has decided “not to continue with the purchase of the Hollywood.”

He pointed out that the church had been working on a second contract after an earlier one had fallen through. The church’s architect presented a submission to the city planning office in September, containing several important requests: “in particular that in return for maintaining some of the heritage aspects of the building and offering community access to the facility, the city would enable us to change the designated use of the Hollywood from a ‘theatre’ to a ‘church’; give us the ability to sell our unused density to help cover the renovation costs; and guarantee relaxations on a number of city by-laws (such as parking, among others), as is common with buildings of heritage value.”
In October, the church received a disappointing letter from the planning office, which “rejected important aspects of our proposed renovations that were necessary for the facility to work as a worship and community space; it required that we double the amount of community access time we were offering (at cost-recovery only); and it did not guarantee the by-law relaxations or the change of use designation we had requested.”
The board and elders decided at that point not to go ahead with the purchase, but the owner extended the contract until the end of the year. Subsequent talks with the planning office and a city councillor did not change the situation. The church allowed the contract to lapse at the end of the year and is no longer pursuing purchase of the Hollywood Theatre. 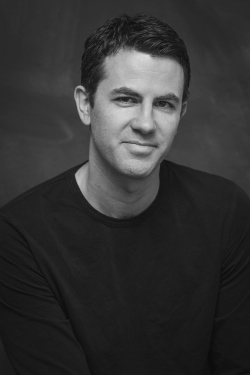 Pastor Tim Horman feels Redemption Church has been open to God’s leading, no matter where it is housed.

Acknowledging to his congregation that “this feels like a disappointing outcome, especially after so much work and prayer and money has been invested in trying to make the purchase a reality,” pastor Tim Horman said:

I want to make it clear that God’s purpose for us has never been about the Hollywood Theatre (or any facility for that matter). We have tried to keep this in our minds all the way through the process. Our attitude has been that although the Hollywood is a facility with many problems, and required a lot of upgrading, it seemed to make sense to move there from the perspective of our presence and mission in the neighbourhood.
We never thought that our mission in the neighbourhood was dependent on the theatre, but we could see how it might be enhanced by it. We weren’t sure what the outcome would be, and have been open to God’s leading at every step along the way.
For the full statement go here. For earlier stories on Church for Vancouver go here and here.
Tim announced last September that wherever the church ended up, it would have a new name:
As of this week, we will be no longer be Church From the Hollywood. Our new name is Redemption Church. After 25 years as Point Grey Community Church, and two years as Church at/from the Hollywood, we are replanting the church with a new vision and a new name. . . . Our vision is simple. To join with God in bringing Redemption, Reconciliation and Renewal to Vancouver. Our name reflects the call of the church to join with God in healing the world. This is our passion and our great joy.

I recently wrote a story on the loss of local church properties in Vancouver – and the great difficulty in finding new land or renovating older buildings for church purposes. 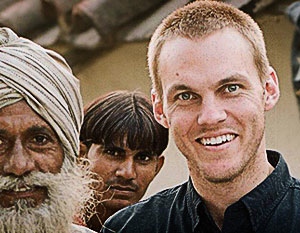 David Platt will be in town January 27.

David Platt is best known for his books – Radical, Radical Together, Follow Me – but he is also pastor of a megachurch and, more recently, president of International Mission Board, which has almost 5,000 members in the field. He will be in town next Tuesday (January 27) as part of the Send North America Experience Tour, at Bethany Baptist Church in Richmond.

This excerpt from the introduction to Radical Together gives a sense of Platt’s passion:

In my first book, Radical, I explored how the biblical gospel affects individual Christian lives. Simply put, in a world of urgent spiritual and physical need, gospel-believing, God-exalting men and women do not have time to waste their lives pursuing a Christian spin on the American dream. . . . as long as individual Christians journey alone – no matter how ‘radical’ they are – their effect will be minimal. But as men and women who are surrendered to the person of Christ join together in churches that are committed to the purpose of Christ, then nothing can stop the spread of the gospel to the ends of the earth.

In Radical Together, I want to consider what happens – or can happen – when we apply the revolutionary claims and commands of Christ to our communities of faith. I want to contemplate the force of a people who come together to enjoy God’s grace in the church while they extend God’s glory in the world. And I want to propose that a movement of such people in such churches has the potential to permeate nations with the praise of God.

Platt will be joined by worship leaders Shane and Shane.

Thomas Merton: A Man for All Seasons
Recognizing that Thomas Merton “is viewed, by many, as one of the most significant contemplative theologians and prophetic Christian public thinkers of the 20th century,” Regent College is celebrating the 100th anniversary of his birth this month with an afternoon Symposium January 29 that touches on some significant aspects of his life and writings.
Moderator Hans Boersma from Regent will be joined by three presenters. Jens Zimmerman (Trinity Western University) will address ‘Dietrich Bonhoeffer and Thomas Merton: Christian Humanists’; Lynn Szabo (Trinity Western University) will look at ‘Merton’s Theopoetics: The Symbiotic Relationship between Theology and Poetry’; and Ron Dart (University of the Fraser Valley) will discuss ‘C.S. Lewis and Thomas Merton: Mutual Admiration and Soul Friends.’
On February 5, Don Grayston, past president of both the Thomas Merton Society of Canada and the International Thomas Merton Society, will discuss  Thomas Merton at 100: Public Intellectual and Democratic Dissenter at SFU Harbour Centre.
For a more relaxed evening, you could try Thomas Merton’s 100th Beerthday, uh Birthday Party at Our Town Cafe on Broadway near Main. For other local Merton-related events go here.
Celebrating 25 years with Darryl Klassen 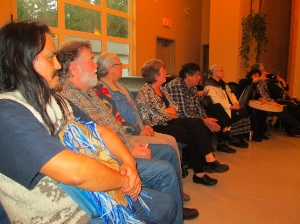 Darryl Klassen, second from left, was recently celebrated for his 25 years with Aboriginal Neighbours.

My wife Margaret and I recently had the honour of joining a celebration of Darryl Klassen’s 25 years with MCC BC’s Aboriginal Neighbours program. Last Sunday (January 18), friends, co-workers and those who had benefited from his tireless bridge-building with Aboriginal cultures heard many stories about his work around the province. He even entertained us with a couple of songs; one of his other lives involved producing and playing country folk (hillbilly jazz?).

My own family benefited from Darryl’s friendships with Native people. He took our family on a 10-day camping trip to three native communities – Dog Creek, Cheslatta and Ksan – in 1993. We had chance to meet and interact with some of the people living there, and it has affected our lives since. Our four children who still live in Metro Vancouver all work or volunteer with Aboriginal people to one degree or another, and have come to appreciate their culture. Thanks Darryl!

← Place-making: The latest fad or a foretaste of the kingdom of God?
Glenn Smith: How – and why – churches should research their neighbourhoods →