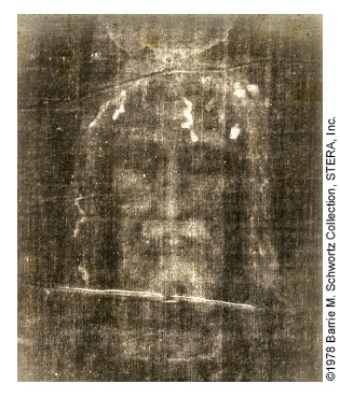 “The face in the Shroud conveys a great peace; this tortured body expresses a sovereign majesty. It is as if it let a restrained but powerful energy within it shine through, as if to say: have faith, do not lose hope; the power of the love of God, the power of the Risen One overcomes all things.”

So said Pope Francis in a statement about the Shroud of Turin during the Easter season in 2013.

Those of us in Metro Vancouver will have the opportunity to see for ourselves this week (April 8 – 13) at the Man of the Shroud Exhibition and Lectures at Rosemary Heights Retreat Centre in Surrey.

Organizers – a group of clergy and lay people in the Vancouver area – say this of the exhibition:

It consists of a series of professionally-prepared documentary museum panels; a collection of recreated artifacts of Christ’s passion; and an actual-size photographic reproduction of the Turin Shroud. The exhibit will be complemented with a lecture series given by Shroud scholar, Phillip Wiebe, PhD; Father Andrew Dalton, LC, Rome; and Father John Horgan, pastor of St. Pius X Parish, North Vancouver.

The Shroud of Turin is a 14-foot long linen cloth which bears the mysterious image of a man who has been scourged and crucified. Since at least medieval times, it has been venerated as the cloth in which Jesus’ body was wrapped in the tomb . . . Each new study and discipline has uncovered data that had not been previously imagined, resulting in new interest not only in the cloth itself but also in the crucifixion and resurrection of Jesus.

The exhibit will be of special interest to those asking questions about Christian faith, as it focuses on bringing participants to ask the question, “Who is the Man of the Shroud?” Confronting us with the evidence of Jesus’ sufferings and death – as well as his resurrection – the Shroud causes us to ask the further question, “And what does he mean to me?”

Phillip Wiebe, who teaches philosophy at Trinity Western University, says: “The Shroud of Turin is often considered as nothing more than a curiosity, especially by Protestants. However, its significance for the claim that Jesus was resurrected is arguably quite important.”

A recent report from the Catholic News Agency says that Pope Francis “will venerate the Shroud in the Cathedral of Saint John the Baptist shortly after his arrival in Turin” during a June 21 – 22 visit.

The pope said in 2013 that “our gaze is not a mere ‘observing.’ but rather a veneration. It is a prayerful gaze.” In reporting his comments, The Economist pointed out:

[H]e issued a statement that urged people, in rather passionate terms, to contemplate the object with awe; but he also stopped firmly short of asserting its authenticity. In a carefully worded message, he asked and answered a rhetorical question: “How is it that the faithful, like you, pause before this icon of a man scourged and crucified? It is because the Man of the Shroud invites us to contemplate Jesus of Nazareth.”

Wise words, whatever the exact nature of the Shroud. 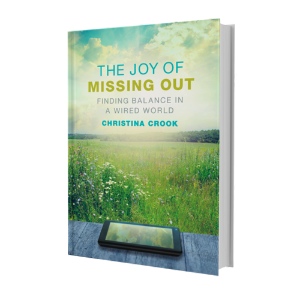 Christina Crook: The Joy of Missing Out

Christina Crook’s new book, The Joy of Missing Out, is getting all kinds of attention from across the country and around North America. She has been interviewed by CBC, CTV, The Vancouver Sun, Christianity Today and many other outlets – and endorsements are rolling in as well.
Here’s the comment I like best; serious book sales loom, to the extent that Read Mercer Schuchardt (associate professor of communication at Wheaton College) has his finger on the pulse of the culture:

In its own way, The Joy of Missing Out is our age’s sequel to The Joy of Cooking and The Joy of Sex. Who knew you could gain so much by selectively giving up so little?

So, what is The Joy of Missing Out (JOMO) about? The publishers subtitled the book ‘Finding Balance in a Wired World’ and describe it this way:

There’s no doubt that technology has overrun our lives. Over the past few decades, the world has embraced ‘progress’ and we’re living with the resultant clicking, beeping, anxiety-inducing frenzy. But a creative backlash is gathering steam, helping us cope with the avalanche of data that threatens to overwhelm us daily through our computers, tablets and smartphones. . . .

Most of us can’t throw away our smartphone or cut ourselves off from the internet. But we can all rethink our relationship with the digital world, discovering new ways of introducing balance and discipline to the role of technology in our lives. This book is a must-read for anyone wishing to rediscover quietness of mind and seeking a sense of peace amidst the cacophony of the modern world.

I’m cheating a bit by including JOMO in an ‘Around Town’ column on Church for Vancouver because Christina (and her husband and three children) “recently traded the seaside views of Bowen Island, British Columbia for the banks of Toronto’s Humber River where they attend Grace Toronto Church.”

But a glance at her blog will show the depth of her connections to Metro Vancouver. She grew up here and her blog is rife with appreciation for friends and family in the area. On top of that, I am pleased to note that she used to write for Christian Info Society (when I was publisher) along with other publications, from Vancouver Magazine to Faith Today, Geez, CBC.ca and many others.

To hear Christina Crook’s April 6 interview on CBC’s The Current, go to Ditch social media and FOMO to discover the ‘Joy of Missing Out’ (and start at 12:50). 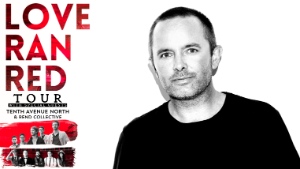 Chris Tomlin will be leading worship this Sunday (April 12) at Abbotsford Centre.

One of the really big names in Contemporary Christian Music will be dropping in this weekend. Chris Tomlin will be at Abbotsford Centre with his Love Ran Red Tour on Sunday (April 12).
Among Tomlin’s best known songs are ‘How Great is Our God’ and ‘Our God.’ Five of his songs are in the CCLI top 25; most of those are co-written with other artists.
Tomlin has produced 10 albums, which have sold some 30 million copies. The latest – Love Ran Red – came out last fall. He won a Grammy Award for Best Contemporary Christian Music Album in 2012 and has won many Dove Awards.
Tomlin is obviously very popular in the pews. A 2013 article in Relevant pointed out:

It came as a surprise when CNN hailed worship leader Chris Tomlin as the world’s most-sung artist.

It’s a hard claim to quantify, but Christian Copyright Licensing International [CCLI] estimates Tomlin’s songs were played in churches well over 3.1 million times in 2012. CCLI extrapolates that data to figure at least 20 million people are singing Chris Tomlin songs on any given Sunday. For comparison, CNN says Katy Perry’s songs were played on the radio about 1.4 million times in 2012.

Of course, Perry and her ilk have album sales that dwarf Tomlin’s, but their songs aren’t used in global weekly sing-alongs. In all likelihood, several worship artists would top any honest list of “the world’s most-sung artists.”

Tomlin’s music has not received unanimous praise. Regent College prof John Stackhouse, for example , wrote that “he is a bad lyricist” in his blog Chris Tomlin’s Worship Songs: We Have to Do Better back in 2009. His post generated a lot of heat and some light as well. The Worship Wars aren’t what they used to be – fortunately – but the comments are still worth reading.
More recently, Jonathan (a music director in a mainline church, no last name mentioned) blogged: What did Chris Tomlin ever do to you? or: Why I criticize a worship superstar, which is also worth reading, and also features some good responses.
Popular taste will never win over professors and music directors. The thousands who go to the concert will have a great time (I’m pretty sure I’d enjoy it myself). But I hope they – and Chris Tomlin – will listen to the critics as well.
Tomlin will be joined by Tenth Avenue North and Rend Collective.

CPJ Justice Tour
As a young adult Marxist (of sorts) convert to Christianity, Citizens for Public Justice (CPJ) gave me hope that at least some Christians did care for social justice issues. And it still does. On February 3, for example, a collaborative campaign between CPJ and Canada Without Poverty, released Dignity for All, an ambitious and compassionate National Anti-Poverty Plan for Canada.
So I am looking forward to the CPJ Justice Tour 2015 stopover at Our Lady of Sorrows Catholic Church in East Vancouver next Monday (April 13). No doubt the speakers – Susan Johnson (National Bishop of the Evangelical Lutheran Church in Canada), Willard Metzger (Executive Director of Mennonite Church Canada) and Karen Hamilton (General Secretary of the Canadian Council of Churches) will suggest some creative ways for Christians to approach justice issues, particularly in light of the upcoming federal election. 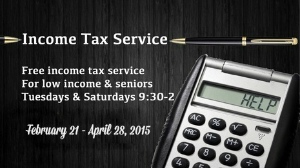 According to the church website, “Those eligible for this service will be low income, and may include Aboriginal peoples, social assistance recipients, newcomers to Canada, seniors and students.”

The volunteers invite clients to join them for coffee when they come in; the service runs until April 28.