Like many Vancouverites, Amy Dauer has felt helpless watching the plight of Syrian refugees on the news. But the 24 year old theatre graduate was struck with an idea recently: She could use her gifts for acting and playwriting to make Syrian children laugh – and help them understand that Canada is a safe place they can call home.

Dauer partnered with the Syrian Canadian Council to put on Vancouver’s Welcoming Squad, an interactive theatre event for Syrian refugee children on Wednesday (December 16) at the Vancouver Welcome House. The story, penned by Dauer, was funny and non-violent, as well as non-verbal so children were able to follow even if they don’t speak English. Children were invited to participate in face-painting, music and dancing.

Dauer, who graduated from the theatre program at Trinity Western University in 2014, said she hoped the event would be a bright spot for parents as well as children: “For a lot of parents, the greatest cause of distress can come from seeing your children living in despair and hopelessness. If we can make the kids smile, maybe their parents will smile too.”

Churches and related groups all over Metro Vancouver are actively welcoming, and looking forward to welcoming, Syrian refugees. I’ve heard many encouraging stories; here are a few of them: 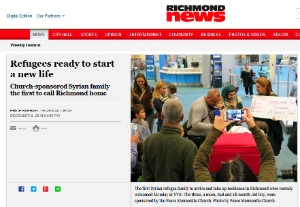 * Peace Mennonite Church in Richmond welcomed the first family in this wave of refugees. Here is a portion of a December 8 story from The Richmond News:

There wasn’t a familiar face in the crowd welcoming them to Canada in the international arrivals at YVR Monday, but Samer Alragheb and his wife, Amna knew who Justin Trudeau was.

“I don’t know how they knew who the Canadian prime minister was, but they said he was a good man,” said Subrata Chakrabarti, who coordinated Richmond’s Peace Mennonite Church’s sponsorship of the Syrian couple and their 18 month old son.

They are the first refugees from the war-torn region to find a new home in the Lower Mainland, as part of Canada’s recent efforts to provide sanctuary for thousands who have been displaced.

Chakrabarti said Samer, 30, and Amna, 20, are originally from the city of Edlib which is 60 miles south of the Aleppo, Syria’s largest city. They fled their home and for the last two years have been in a refugee camp in Lebanon – their son was born in Tripoli.

Now they are here, thanks in part to funds raised by members of the church, Chakrabarti said the couple is anxious to start new lives in Canada. 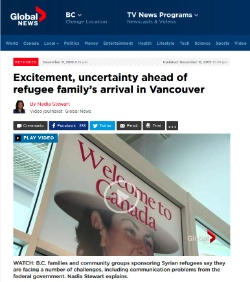 * Kitsilano Christian Community Church raised more than $50,000 in less than 30 days. A report on Global TV by Nadia Stewart December 11 shows members of the church getting ready for the arrival of their family of five from Damascus. The date of that arrival is still uncertain, but Ged McLean said that’s no deterrent:
We have to maintain a state of readiness for them to come. We have to be looking for long-term accommodation for them, which is a huge need that we’re trying to address. But we don’t know when we need it. So, there’s this challenge and I think what we’ll have to do is just keep stepping forward, step by step in faith and we’ll figure it out.
Kits’ denomination, the Canadian Baptists of Western Canada, is helping with the sponsorship process. 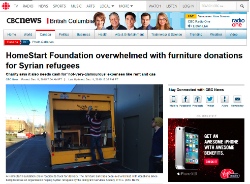 * HomeStart Foundation, a Christian non-profit which donates furniture, has been inundated with offers of support. A story on CBC News December 11 said:
A Vancouver-based furniture bank says it has been overwhelmed with donations for Syrian refugees, and it now needs cash to get those donations to those who need them. Vancouver-based charity HomeStart Foundation collects gently-used furniture and delivers it to homes in need.

It was listed on the Immigrant Services Society of BC website, along with several other groups, as a charity looking for donations for Syrian refugees coming to BC. Vikki Stevenson, the group’s executive director, said in 10 years, she had never seen so much support.

Stevenson asks people to hold onto their furniture until space again becomes available in HomeStart’s warehouse. 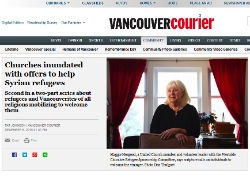 * Westside Churches Refugee Sponsorship Committee is a group of seven United, Mennonite and Presbyterian churches which is sponsoring a pair of Syrian brothers in their twenties who could arrive within weeks. Pat Johnson interviewed United Church member, and voluntary leader of the group, Maggie Hosgood for a story in the Vancouver Courier. She said:
There is a lot of scripture that calls us to welcome the stranger, to look after those who need our help, to see brothers and sisters in new faces. We have a saying – we don’t sponsor people because they are Christian. We sponsor people because we are Christian.
These stories are just the tip of the iceberg, ones noticed by the media. There are similar stories all over Metro Vancouver – good news whether it’s covered or not!

The chief justice of the British Columbia Supreme Court ruled in favour of Trinity Western University (TWU) December 11, concluding that the benchers of the Law Society of BC (LSBC) “improperly fettered their discretion and acted outside their authority in delegating to the LSBC’s members the question of whether TWU’s proposed faculty of law should be approved for the purposes of the admissions program.”

The Evangelical Fellowship of Canada (EFC) provided a very useful synopsis of the decision and the overall situation:

The BC Supreme Court ruled today in favour of Trinity Western University (TWU) in its legal challenge against the Law Society of British Columbia.

In today’s judgment, Chief Justice Hinkson ruled that the Law Society of BC had not adequately considered the religious freedom Charter rights of TWU and its students.

“We welcome the outcome of the decision and the court’s recognition that the Law Society’s refusal to recognize future TWU law graduates’ degrees ‘conclusively . . . infringe[s] [their] right to freedom of religion’,” says Bruce Clemenger, president of The Evangelical Fellowship of Canada.

Lawyer Geoffrey Trotter of Vancouver, who served as co-counsel to the EFC, explains: “The court ruled that the benchers denied TWU the opportunity to present its case during their deliberations and to have its submissions fairly and fully considered, and that the benchers wrongly bound themselves to a referendum of all BC lawyers in which there was no evidence that the voting members gave any consideration to the Charter rights of TWU and its students.” 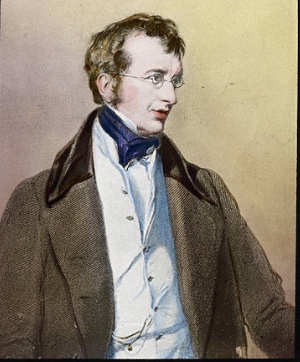 Thomas Fowell Buxton chaired the first meeting of the SPCA, in 1824.

A recent article in the Province noted that the SPCA turned 120 in British Columbia this year (and celebrated its one-millionth adoption). The society was initially formed in England in 1824, as part of a series of reforms initiated the Clapham Sect, led by William Wilberforce.

A BBC documentary had this to say:

Wilberforce was a leading member of the Clapham Sect, a group of evangelical Anglican Christians with a strong bias towards social improvements, who worked for the abolition of the slave trade and promoted missionary work. One of their causes was the formation in 1824 of the Society for the Prevention of Cruelty to Animals. . . .

Chairing the first meeting of the Society in 1824 was Thomas Fowell Buxton; another BBC entry points out that he was also leader of the anti-slavery movement when Parliament voted to abolish slavery in 1833.

(Full disclosure: Family lore – my family lore that is – has it that Buxton is one of our ancestors. This fact is undisputed, though untested, and will probably remain that way, for fear that it might be disproved.) 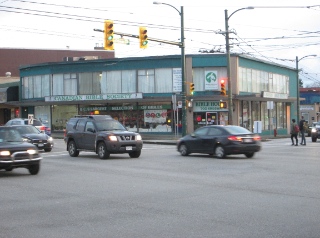 This landmark of the Christian church in Vancouver will be closed December 31.

The Canadian Bible Society has decided to close its high-profile bookstore on the corner of Kingsway and Fraser in Vancouver by the end of the year. A letter on BC page of the society’s website from interim national director Don Hutchinson announced the closure, making it clear that Bible distribution will continue:

For many years, it has been the privilege of the Canadian Bible Society to provide quality Bibles and Christian resources in the province of British Columbia through the local ministry of our Vancouver bookstore. However, after a careful evaluation of bookstore operations in Vancouver and across the nation, our Board of Governors has reached the difficult decision to close the Vancouver bookstore, effective December 31, 2015.

In making this decision, consideration was also given to the expanding distribution of Scriptures within the province through our ministry partners – churches and other ministry organizations – which do not require the overhead costs of operating a bookstore.

In conjunction with the BC provincial board, we are looking at possible locations in the Vancouver region to continue to maintain offices and a small display area. We hope to announce a suitable location in the near future.

Given the loss of spaces available for church meetings – and the store was ideal because of the large room on the top floor – one hopes the Bible Society will be able to find a purchaser who will allow churches to continue to meet there.

In the meantime, Grace New Covenant Pentecostal Church, which has been meeting in that space for 16 years, will have to find a new meeting place. Pastor Shawn Selvarajah would love to hear from anyone with a suitable location; contact him at ntcshawn@gmail.com or 778.881.3714.

The Bible Society has a long history in BC. From its website:

The Bible Society’s first work in BC was during the Gold Rush of 1858 – 1861, when the Upper Canada Bible Society sent Scriptures in several languages to miners panning gold on the Fraser and other rivers. . . . In 1899 a branch began in Vancouver.

← Seventy years after the Holocaust, anti-Semitism is again on the rise
The other Saint Nick →