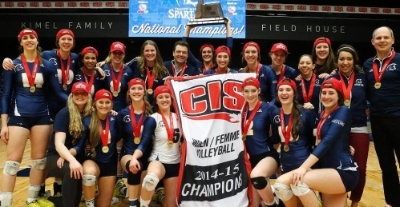 It’s not like it’s ancient history, but if you look back on the humble beginning of Trinity Western Spartans women’s volleyball, it certainly seems like a long time ago.

On Sunday, as it won for the 23rd time in its past 24 matches, the contrast over 16 seasons was stunning.

Second-year setter Nikki Cornwall of Coquitlam was named the 2015 championship MVP. For the full story go here.
The TWU men’s team has been very strong over the past few years; it has taken home two national volleyball titles and was playing in its fourth national final in the past six seasons. This time they came away with the silver medal, losing to the Alberta Golden Bears.
In other sports news, on February 28 the TWU Spartans women’s track and field team won the Canada West championship for the second straight year, while the men finished third overall.

Memorial for Shiloh and Keziah Johnston 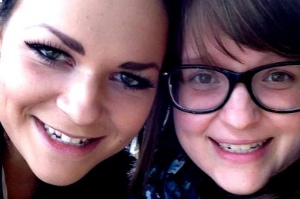 The lives of Keziah (left) and Shiloh Johnston will be celebrated at Willingdon Church.

The lives of two sisters who died just a few days apart last month will be celebrated at Willingdon Church this Saturday (March 7) at 10 am. Here is a portion of an article about Shiloh and Keziah Johnston in The Tri-City News:

A grieving young Coquitlam woman who wanted a legacy bench to keep the memory of her younger sister alive will now have a bench in her name as well after she died tragically in a car accident.

A fundraising campaign has been established on the website gofundme.com to buy the bench and contribute to other charities supported by Keziah, 20, and Shiloh Johnston, 22.

The two young women died within 10 days of each other, Keziah earlier in February of undisclosed causes, and Shiloh on February 17 from injuries she sustained when she was hit by a car while walking.

Now their friends, families and church communities are in mourning. . . .

According to the website, Shiloh was back at her second day of work after taking a week off to grieve her younger sister’s death and was walking during a lunch break when she was struck by a car that had collided with another vehicle.

Cari Andrews, a friend from Shiloh’s drama ministry at Northside Foursquare, recalls Shiloh as a person who was full of life and drew people in. “You could tell [she] had Jesus in her,” noted Andrews, who recalled her friend’s perseverance and dedication.

Burying those without a name 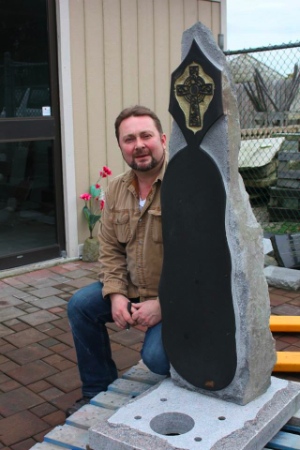 Ves Vukovic with one of his creations at his business, Stonemarks. He also makes gravestones for people who have died without family.

Douglas Todd’s blog featured an interesting story the other day about how people are buried when no one knows who they are. Most such burials – “in this careful-to-not-offend era . . . ‘pauper’s burials’ are now technically called ‘ministry burials’ – take place at Surrey Centre Cemetery.

Todd included a heart-warming story about a local Orthodox Christian who has made it his business to provide gravestones for graves that would otherwise be unmarked:

Ves Vukovic had a friend whom he saw only once or twice a year. After the Serbian man died, it was months before Vukovic found out.

When Vukovic tried to find where his friend was buried, it wasn’t easy. But, along with discovering the fellow had been on welfare, Vukovic . . . learned his friend had a ministry burial – and there was no gravestone.

It so happens that Vukovic makes them.

Since Vukovic arrived in Metro Vancouver in 1995 from war-ravaged former Yugoslavia, he has carried on with his family’s traditional engraving business, which is called Stonemarks. . . . Vukovic began making simple gravestones out of B.C. granite – not only for his friend, but for other so-called paupers.

“I make headstones for all these needy people,” Vukovic said this week. So far he and family members have been making about 50 flat gravestones a year.

Vukovic and his family do so at the end of their normal workday. Each headstone takes about three hours. They would cost anywhere from $450 to $850 retail. But Vukovic donates them, receiving only a charitable tax receipt. Why?

“When I came to this great country of Canada, after experiencing five years of war, people with big hearts made our family feel very welcome,” said Vukovic, a member of Burnaby’s St. Archangel Michael Serbian Church. “And I thought: ‘It’s our time to do something on behalf of this society.’”

As a result of the generosity of the Vukovics, other supporters and the city of Surrey waiving certain fees, roughly 175 of Metro Vancouver’s deceased so-called ‘paupers’ have now had headstones placed on their graves.

Anna Christian, the coordinator of Surrey Centre Cemetery, told Todd she “wants to approach religious groups to find volunteers who would serve as witnesses at the burial of a person who would be a stranger to them.”

(Surrey Centre Cemetery was established by the Methodist Church and has been in use for over 110 years. The Christ Church Anglican Church and Cemetery, a heritage site, is adjacent to the cemetery.)