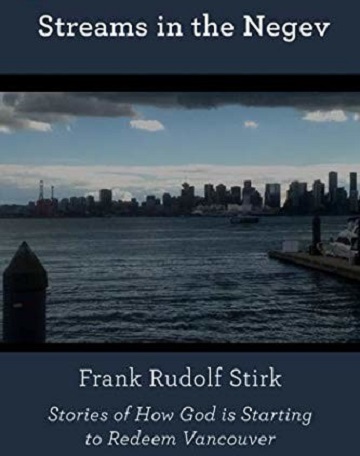 Frank Stirk has written a book that should be read by anyone who believes – or would like to believe – that the church can have a positive future in this city. He has carefully chronicled how the church is growing rather than dying in the downtown core.

Streams in the Negev tells ‘stories of how God is starting to redeem Vancouver.’ He told some of that story in the May 2019 issue of the International Journal of Urban Transformation. It is re-posted on Church for Vancouver (in two parts; go here for part 1) with the author’s permission.

Most of this peak in church-planting activity occurred between 2010 and 2015. Which begs the question: Why then and not at some other point in time? The answer appears to be the catalytic effect of the Winter Olympics Games held in Vancouver over two weeks in February 2010 and the positive community spirit it created – plus the heavy investment in prayer it generated among Metro Vancouver’s Christian community both years in advance of the event and during it.

“The affirmation that Canada as a nation received out of the Olympics created a confidence that spurred exploration of new ideas,” says Ray Woodard, a local church-planting leader with the Canadian National Baptist Convention. “It was a beachhead from which to launch.”[28]

Others don’t go that far, but they see a connection nonetheless. Dr. David Koop, the senior pastor of Coastal Church in the West End, credits the way God used the massive global media coverage of the Games to call out potential church-planters. “The Olympics put Vancouver on the map,” he says. “There definitely was an awakening within the church world outside of Vancouver, an awareness that this is a mission field: ‘This is a place that needs to have a greater church presence, and I feel I’m called to it.’”[29]

Dr. Darrell Johnson, at the time the senior minister of First Baptist Church, saw evidence of that the following year. “I was taken aback by the number of people who showed up wanting to meet me, who were church planters from largely the States or eastern Canada,” he recalls. “I never asked, ‘Did you know about Vancouver because of the Olympics?’ Now they may not have made that direct connection, but I can see that as they were praying, they saw God’s leading, God wanting to transform Vancouver.

“Some of them didn’t stay, because they thought of themselves as the great savior of Vancouver. They just had this perception that Vancouver had no churches. I disabused them of that. Then they’d say, ‘Is there room for me?’ And, of course, there is. But they didn’t stick around.”[30]

As for the people of Vancouver, while the openness many of them showed during the Games has waned since then, it’s still there. “It’s not as if every second person is throwing themselves at us to come to Jesus or receive what we have to say,” says C3 Vancouver’s Graham Fletcher. “We just find there’s a much better open attitude which we need to go with. That openness, that surge of receptivity, is definitely being felt by us in the downtown.”[31]

In early 2018, Mennonite Brethren urban missionaries Dennis and Mistin Wilkinson and their four children, who had been ministering under the banner of Meta Communities in the West End for six years, lost their rental home and were forced to move. After checking out a staggering 68 options, they finally found a new home that meets their needs perfectly.

“God has done this, there is no denying that,” Wilkinson wrote. But while it’s still (if just barely) within the downtown peninsula, it’s outside the West End. “This was never our plan. We love the West End . . . All of our friends and support network are [there]. Our vision for ministry life never expanded beyond the borders of the West End. We started a church in the West End for West Enders! So now what?”[32]

Wilkinson blames their housing crisis on “skyrocketing market rental prices and a complete lack of suitable vacancies”[33] – and he’s not alone in facing this dilemma. Finding an affordable and feasible place to hold worship services is one of the greatest obstacles facing Vancouver’s new church planters. Compounding the lack of rental space is a declining stock of disused older church buildings. Once they’re sold, they’re usually either torn down to make way for a new development, turned into multiple residences, or bought by another religious organization.[34] Only rarely is a new church able to take over the property.[35]

Virtually every church planter has a story to tell about the difficulties they faced – and often continue to face – in trying to find some place to rent. When the MB’s Artisan Church, launched in downtown Vancouver in 2012, tried to plant a new neighborhood parish in the nearby Mount Pleasant area in 2014, they had to move its location four times in two years before eventually deciding first to leave Mount Pleasant and then to abandon the entire project. (Part of the problem ironically was the need for additional space to accommodate a growing congregation.)[36]

When Calvary Chapel church planter Marlon Brown and his family and team arrived in 2013 from Idaho, to launch what is now Awake Vancouver, it took a lot of searching before they finally found a meeting place in Yaletown. “We didn’t really know where in Vancouver the Lord wanted us to plant,” he says.

Coastal’s David Koop likewise laments the loss of the older church buildings. “When you lose that vibrant church community, you’re sending a message,” he says. “There’s a theology around a building. It speaks that there’s life, a presence of people and community there. So, when these buildings disappear, then it’s like ‘Christianity is on its way out.’ But if we’re breathing new life into them, then it’s ‘The church is strong and healthy.’ It becomes more attractive to the unreached.”[38]

Yet the situation facing these and future church plants is unlikely to change for the better. When the City of Vancouver, for example, approved a new community plan for the West End in 2013,[39] the only mention of churches was a passing reference in a broader discussion on the lack of cultural facilities in the community. That led one Christian observer to comment, “The church – all faith groups for that matter – appear to be way off the radar of city planners.”[40]

“Jesus is always building His church”

A decidedly secular or materialistic ethos has always been part of Vancouver’s DNA, a permanent and immutable characteristic – humanly speaking, of course. Because perhaps now more than ever before, there is a growing sense that a change is beginning to take place spiritually that can’t be attributed to any human effort. As Trinity Central’s Rhys Scott says, “It doesn’t seem to be organized strategically by a bunch of people. It does seem to be very much a God thing. There is a real sense of increasing activity.”[41]

This is not at all to gloss over the challenges they face. Most planters are living daily on the knife edge; it would not take much for them to face setbacks big enough to jeopardize their ministries despite all their prior “successes.” Reacting to a 2015 study on church planting in Canada[42], James Watson, the Corps Health and Planting Consultant for The Salvation Army Canada and Bermuda, noted that it reported remarkable stories of significant numbers of Canadians experiencing faith in Jesus for the first time and rapid growth of recent plants . . . however they do not seem to be common.

The more usual feedback that I am picking up from Canadian planters is acknowledgement of the depth of prayer and personal investment in lives and communities required for reaching the point where there are spiritual conversations.[43] If one were to measure the transformational impact these churches are having solely by Sunday worship and small group attendance and the number of baptisms, the results to date could be worrisome.

“It’s sobering,” Alistair Sterne says. “Westside has seen phenomenal growth. It’s great there are maybe 1,500 people there now. But that’s nothing in terms of influence in this city. If you compare that to like a voter demographic, you couldn’t even influence who’s going to be the Member of Parliament. That’s how insignificant it is. And so there has to be a movement of God.”[44]

But Dr. Jason Byassee, a professor of homiletics and biblical interpretation at the Vancouver School of Theology at UBC, seems more hopeful that this movement is already happening. After visiting churches in Vancouver across the denominational spectrum, he wrote that he’s “convinced that . . . God is still alive and well here and wherever God is alive the Church is getting born.”

One example was what he saw and heard one Sunday at Westside: “Its preaching is line-by-line exegetical, almost more Bible study than preaching. Its music is loud and excellent and its cultural references hip. But it’s not selling hipness, it’s selling expository preaching. . . . I’m just amazed at the crack in the dome [of secularism] it represents.”[45]

Jonathan Bird with the CityGate Leadership Forum also sees God moving among Vancouver’s churches. “I’m actually stunned by the quality of the pastors. The level of education, of thoughtfulness, of cultural awareness among church planters and the pastors who’ve been here 15 years or more really impresses me,” he says. “Vancouver is a brilliant laboratory for 21st century mission, and God has put some brilliant people here.”[46]

“When I arrived here in 2000,” Darrell Johnson says, “there was one congregation in Vancouver with an attendance of over a thousand on Sunday. There are a dozen now [across the Lower Mainland]. Jesus is always building his church. . . . I’m very optimistic about the Church, even in so-called ‘secular Vancouver.’”[47]

The bottom-line question, though, is how many people, usually millennials, are actually coming to Christ through these new churches – versus how many attenders have had some previous exposure to Christianity. “I can count certainly on one hand the number of actual conversions that have happened in Artisan’s life that we have baptized that have come to faith from an entirely non-faith background,” says Artisan’s Nelson Boschman. “The vast majority have been those who have gone on a journey back to church and maybe are being discipled for the first time or in an intentional way.”[48]

These people have been called the “de-churched.” Many of them, wrote author and pastor Skye Jethani, “haven’t walked away from faith in Christ. These Christians have simply lost confidence in the institutional structures and programmatic trappings of the church. For them the institutional church is not an aid in their faith and mission. Rather it’s become a drain on time, resources, and energy. It feels like a black hole with a gravitation pull so strong that not even the light of the gospel can escape its organizational appetite.”[49]

Over at Trinity Central, eldership team leader Rhys Scott says “the whole de-churched demographic is quite large. Certainly, we’re having a lot of conversations with de-churched people. A lot of our experience has been that people love the belonging in the community and the sense of ‘I’m joined to people that I love hanging out with.’”[50]

“We reach a lot of people who felt like their faith wasn’t connecting with life, but we’re trying not to build the church on transferred growth,” says Sterne. “We’re still figuring out how to reach someone who has never entered a church. We’re reaching a few people. It’s hard. And I think a lot of churches are acknowledging that’s the next hurdle in terms of reaching the person who has no Christian background.”[51] 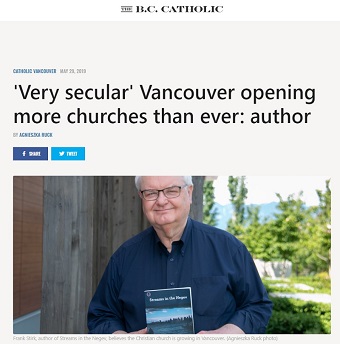 The first part of the article was posted on Church for Vancouver last week.

The B.C. Catholic interviewed Frank Stirk about Streams in the Negev: ‘Very secular’ Vancouver opening more churches than ever: author.

Three earlier stories by Frank (here, here and here) on Church for Vancouver also relate directly to themes in the book.