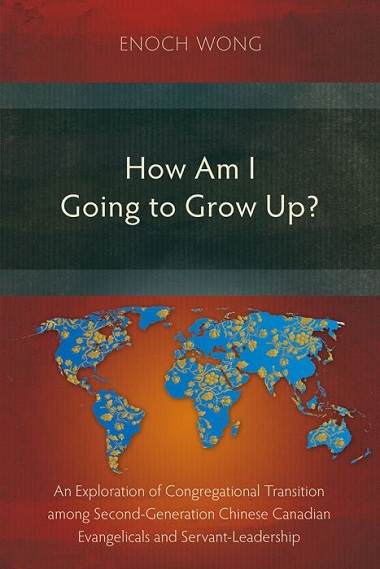 Pastors and scholars have acknowledged for years that there has been a ‘silent exodus’ of Chinese Christians from their parents’ churches throughout North America.

In his new book, Dr. Enoch Wong examines the phenomenon carefully, focusing particularly on the situation in Canada.

How Am I Going to Grow Up? is an academic study based on Wong’s expertise in the sociology of leadership; reflection on leadership styles in immigrant Chinese churches is key to this study.

But the book also relies heavily on in-depth, personal interviews with church members who have taken part in that exodus, and with pastors.

The majority of of the participants lived in western Canada; they represented five major English-speaking cities with a high population of immigrant and Canadian-born Chinese (Vancouver, Richmond, Calgary, Toronto, Ottawa).

He presented the material from this book to the Vancouver Chinese Evangelical Ministerial Fellowship in April. He emailed me: “Those who attended gave me great feedback, and lamented the fact that others did not attend as the topic is very pertinent and relevant to their ministry.”

This in not self-promotion. There is no doubt that How Am I Going to Grow Up? will prove to be invaluable to local Chinese churches, but also to any church which purports to be interested in intercultural ministry.

(I say ‘purports,’ because Wong alluded, during an EFC Faith Trends Podcast interview, to a time when he challenged a Caucasian pastor who described his church as very ethnically diverse. Wong described that kind of church as an “assimilative model . . . if the leadership is predominantly white, it is white.”)

Gordon T. Smith, President of Ambrose University and Seminary made this insightful assessment of the book:

Surely one of the greatest challenges and responsibilities of the church is ‘passing on the faith’ from one generation to the next. This is always a challenge and always a responsibility, but it is particularly so for relatively new immigrant communities, whether it is Russian Mennonites or Cantonese Chinese, Filipino or Somalian.

In this publication, Dr. Enoch Wong focuses on the Chinese diaspora communities in Canada; however, what emerges in this study is invaluable for all communities and churches that are keen to foster the capacity of the church to nurture faith in the children of the church.

Wong spends some time looking at early Chinese immigration to Canada, and their ill treatment – being labelled the ‘Yellow Peril,’ being forced to pay a head tax and being denied entry under the Chinese Exclusion Act (1923 – 1947). Churches were often welcoming, but also often believed that Christianizing newcomers would lead to assimilation.

Particularly interesting is the way he ties the opening up of Canadian immigration policies in 1967 to the “genesis and growth” of the Chinese Evangelical Church (the predominant form among Protestants, and the main focus of this book):

In conjunction with the student ministries on campus, Christian churches began to grow at a fast pace starting in the 1970s as part of the overall ethnic church movement in Canada. The remarkable increase of the ethnic congregations did not necessarily come with forethought or strategic planning on the part of the local Canadian evangelicals.

Rather, many of these churches were established by the newcomers themselves, and the religious communities became a fruit of their labour. This phenomenon emerged mainly as a result of the arrival of a group of evangelical church faithful who were leaders in their home countries or ministers themselves. Once they landed in Canada and saw the needs of the local communities for ministry, they started churches of their own. . . .

The arrival of these religious leaders from their homeland also preserves the ethnic characteristics of evangelicalism of the Chinese church in Canada.

New immigrants found continuity and comfort in these churches, allowing them to adapt to the new land among people with common traditions, cultural rituals, language and customs.

Wong does make the point that while the Chinese in diaspora “can be seen merely as a homogeneous ethnic entity,” they are in fact quite diverse. He argues “that these subethnic groups can be traced to their time of arrival in Canada and thus form different cohorts within the larger Chinese Canadian evangelical community.”

Much of How Am I Going to Grow Up? focuses on this fourth group. Second-generation Chinese Canadian Evangelicals (SGCCE) totalled around 35,000 according to that survey.

As children of the post-1967s so-called ‘new immigrants,’ SGCCE share several key characteristics with the broader cohort of the second-generation visible minority in Canada.

Researchers have suggested that second-generation immigration children in general are less likely to find concrete, meaningful connection with the ‘back-home’ tradition of their parents. Rather, they are prone to evaluate or be evaluated by standards of the ‘new home.’

These Canadian-born Chinese often found themselves struggling with their own identity. Are they Chinese, or are they Canadian? What about their faith identity as Christians?

Some of the most interesting portions of the book are interviews – each several pages long – with individuals wrestling through such issues. For example, Phoebe Lee (not her real name), a 45 year old married mother working as a human resources manager in a major city in western Canada who had left her parents’ church:

The discussion of her children’s cultural heritage led to a discussion of how she saw her own identity. Although she did not “feel very Canadian,” Phoebe characterized herself as “100 percent Chinese [and] 100 percent Canadian.” She further distinguished herself from the immigrant generation by identifying with those Chinese who had “grown up here” in Canada.

However, when juxtaposing her faith identity with her cultural identity, she was adamant that “I’m more than 100 percent Christian before I’m 100 percent Chinese.”

During the EFC interview, Wong said we do not have enough statistical evidence to give a definitive answer about the number of Canadian-born Chinese who have left their parents’ churches, and for what reason: “My personal guess – I would say 50 to 60 percent, when they grow up, they left.”

Those who leave have taken a number of paths.

In an attempt to assert freedom and autonomy, and finding the immigrant church offering no creative platform to realize their aspiration, many second-generation Asian North American Christians have decided to exit their parents’ church.

In so doing, many either have abandoned their faith altogether, or formed congregations in line with their own identity, one that is shaped by their ethnicity, culture and faith.

H. Lee characterizes this phenomenon as a “silent exodus”: it is silent because the younger generation left quietly; it is an exodus, because the size of their departure was massive.

Yet on another level, C. Chen contended that other second-generation Asian American Christians exited their parents’ churches and attempted to stretch their wings because their parents’ religious institutions may have played a role in democratizing the relationship between parents and children, thus consecrating the individuality and autonomy of children.

Be that as it may, research has been devoted to analyzing both the causes and the outcomes of this phenomenon, and multiple scenarios have surfaced since the mid-1990s.

Although some second-generation Asian American Christians have abandoned their faith after their departure, many have creatively crafted different pathways for their transition:

Wong notes that many studies have considered second-generation Asian American Christians, but few have focused on Chinese Canadian Christians, saying:

My study explores how – in the first generation immigrant churches and the non-immigrant congregations SGCCE were attending at the time of interview – the church leadership mediated the transition of SGCCE from their parents’ institution to their current place of worship . . .

Wong pays considerable attention to the issue of ‘foresight’ in this book.

During the EFC interview, Wong said he was trying to understand what is behind the ‘silent exodus.’ He said:

Anything that happened in the church would have something to do with the leadership practices. One of the key attributes of leadership – seldom discussed – is the understanding and exercise of foresight. . . .

It is about the biblical servant leadership, alright, but it is also about [Robert K.] Greenleaf (Servant Leadership), and one of the key things that Greenleaf talked about – and no one picked it up, even within the servant leadership studies – is his discussion on foresight.

His argument about foresight is the ability to really travel up and down the ladder of looking at things. He talks about, [a] leader must at once look far enough and understand what looms ahead, and then come down and begin to exercise leadership capability, to prevent it from happening or to address the opportunity. Failing to do that is actually a moral failure, so said Greenleaf.

So I’m trying to use that kind of a concept, and understand what’s going on in the Chinese church.

His work implies that Greenleaf ’s philosophy of the idea of being the “servant first” could be realized and embraced with appreciation by individuals and communities so that all can “become freer and wiser and become servant-leaders.”

Wong devotes a considerable amount of attention to issues of leadership and foresight (for example, 43 pages are devoted to modern leadership studies as part of his ‘Literature Review.’)

Although this work is solidly academic, Wong is not shy about revealing his personal stake in the enterprise. He introduces the book with an amusing anecdote reflecting intergenerational differences.

As he and his daughter Sarah discussed/debated the ideal university for her; she said she didn’t want to be too far away (not UBC), but didn’t respond well to his follow-up suggestion, the University of Toronto (too near home).

Her response: “Dad, how am I going to grow up if I stay in Toronto!” Higher education was as critical for her as for her father, but so was the opportunity to forge an independent identity.

Wong, who plays a leadership role at a Chinese church associated with the Christian and Missionary Alliance denomination, has a personal connection to the issues he studies and writes about.

Speaking particularly of those who have continued as Christians, he concludes:

As a lay leader in the Chinese Canadian Christian community, I was deeply moved by the openness and genuine emotion expressed by the participants during the interviews. The stories of their transition experience from their parents’ churches to non-immigrant congregations of their choice were filled with pain and agony over the departure, and yet with relief and joy in experiencing growth and a newfound sense of freedom at the churches they were attending at the time of interview. . . .

[T]hey have told me that, irrespective of where they congregate, their religious identity reigns supreme. They know their name. They are Christians, for God has told them, they are his. 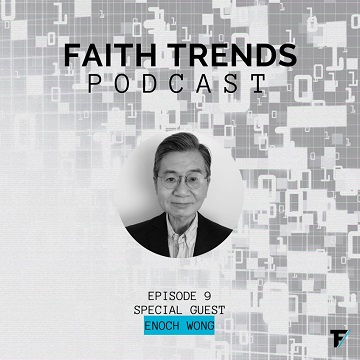