Our Whole Society: Bridging the Religious-Secular Divide will address those questions next month (March 22 – 24) at UBC Robson Square. The purpose of the conference is “to bring together thinkers and practitioners to investigate the process of reconciling secularism, religion and the common good.”

The conference will address issues which underlie some of the conflicts facing the church these days: challenges to the Trinity Western University School of Law; differing views on who should have control over the end of life process (see accompanying article on assisted suicide); whether a city council can deny a group access to a public building because they don’t like to religion-based views of some of its members . . .

The event is not primarily oriented to dealing with such specific issues, however. Nor is it only about challenges facing the Christian church. Organizers explain the value of the conference in this way:

It is often assumed that a secular society has no need for religion in its public affairs, and that faith ought to be left to the private lives of individuals. And yet, Canadian public discourse is increasingly preoccupied with the role of religion in society. Religious freedom, religious accommodation, the secular charter – these have been the subject of headlines for the past several years.

The return of religion has not been about disagreement or conflict between faiths, it has been about the place of religious knowledge, belief and practice in our secular, public life. Expectations that religion would recede out of the public eye have been disappointed. Instead of receding from view, religion has reappeared – in some cases, with renewed social purpose. In this new context, what does it mean to be a secular society?

Does this mean opening up deliberation and discourse to all voices and perspectives without prejudice, or does it require restricting certain ideas from entering into public debate? How should government and the courts regard the problem of religious freedom in relation to other human rights? In a society that values science and free thinking, what does religion have to add to our understanding of the common good?

More generally, what conception of religion does secularism promote, and is this accurate? These questions are not easily resolved in the opinion editorial pages, nor should they simply be left to a few experts to decide. One way or another, they are questions that concern us all.

The steering committee represents a wide range of religious groups, including, Muslim, Christian, Hindu, Sikh and Baha’i. Both the Canadian Council of Churches and the Evangelical Fellowship of Canada are represented on the committee. Speakers also represent diverse points of view; among them will be Regent College professor John Stackhouse and Vancouver Sun columnist Douglas Todd.

The early bird rate applies until this Saturday (February 14). To register go here.

Regent College plans to cut its staff by 30 percent as part of a major restructuring process which is already under way. A February 6 announcement said:
The Board of Governors and senior leadership have focused over the past year on two priorities:

As a result, after months of prayerful consideration and review, we have decided to restructure our organization and reduce our staff complement by approximately 30 percent.

But in today’s world it is far harder than 10 or 20 years ago for people to stop, leave their jobs, move cities and study for a year. So we need to adapt and make our educational offerings more flexible, accessible and affordable so that we can continue to equip the whole people of God. . . .

It is agonizingly painful for me personally to have to inform some of our colleagues that their service to the College needs to end. These reductions in our staffing were really a last resort. Looking ahead, however, I am confident that our new ways of ordering our organization will enable us to serve the church more effectively and creatively in the coming years.

For a full account of the rationale, process and projected results of the restructuring process go here.
UGM says ‘Walk a mile in SHOEme shoes’ 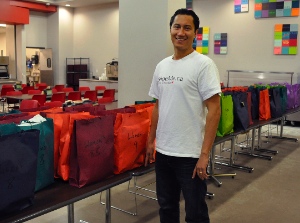 Sean Clark, co-founder of SHOEme, with last year’s donation of shoes to UGM.

On Thursday morning (February 12), just in time for Valentine’s Day, Vancouver start-up SHOEme will team up with Union Gospel Mission to provide the Downtown Eastside community with 200 pairs of brand new quality shoes and socks.

“We’re thrilled to partner with UGM again this year,” says Sean Clark, co-founder and chief revenue officer at SHOEme, which doubled the donation from last year:

Giving back to enhance the community and the lives we touch is an important part of our company culture. We had a fantastic time last year handing out new shoes, and our team learned a lot from UGM staff about the meaningful programs and services they provide to those in need.

SHOEme staffer PJ Worsfold came to UGM for the first time last year, unsure of how his team would be received and wondered what difference their efforts would make, if any.

“The UGM team was really welcoming,” he says. “They assured us that the guests would be glad to see us and would put the shoes to good use. And once we met the community, it felt great. There were so many smiling faces and kind words. We were only sorry we couldn’t meet all of the demand.”

People who struggle with homelessness or are under-housed are forced to spend most of their daytime outdoors,” he says. “And walking is their main mode of transportation. It’s more common for people here to have ill-fitting and/or worn out shoes than it is for them to have adequate footwear. Our damp, wet Vancouver weather exacerbates the problem. This all accumulates to not only painful foot problems, but can lead to medical issues like street feet – much like trenchfoot experienced by World War One foot soldiers.

Shoes are one of the most difficult items to help community members acquire because sizing is much more critical than for general clothing, and adequate practical footware is not often donated. 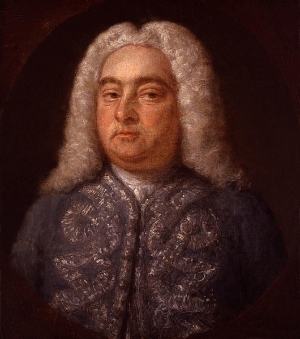 Early Music Vancouver is presenting Theodora, one of the Handel’s largest scale oratorios, at the Chan Centre this Saturday (February 14).

A parable of spiritual resistance to tyranny and an indictment of persecution, Theodora depicts the self-sacrificial love between a Christian virgin and a Roman imperial bodyguard.

And it was written for the Lenten season. From the programme notes by UBC professor emeritus Evan Kreider:

By 1749, George Frideric Handel . . . was still revered as England’s foremost composer, though keeping ahead of the ever-changing whims of London’s notoriously fickle audiences was an ongoing challenge. . . . Finding time to write even a single new oratorio for the coming Lenten Season would be difficult.

Only 38 years earlier, this young German’s Italian opera Rinaldo had been so successful that the king and others persuaded Handel to move to London. But by 1741 and 37 operas later, ticket receipts were no longer covering costs. The Londoners’ former thirst for Italian opera had been well-quenched.

Fortunately, the enterprising Handel had already begun offering entertaining oratorios in English in 1732 for the austere weeks of Lent, when society’s upper classes felt obliged to submit to ecclesiastical admonitions to forego secular theatrical performances during the season of repentance.

Handel realized how readily texts extolling heroic biblical figures could supplant those about ancient deities and Roman politicians. Omitting stage sets and staging helped to quiet uneasy consciences even further, and yet the oratorio libretti, operatic soloists, choir and orchestra could remain as dramatic as in any opera. . . . By the 1740s, Handel was managing to write one, and sometimes two new oratorios for the coming Lenten season’s concerts. Yes, his audiences still adored Messiah year after year, but they wanted other oratorios as well – annually.

Thus it was that in 1749, when Handel turned his attention to the coming 1750 Lenten season, he quite naturally asked his latest favourite librettist, the Rev. Thomas Morell (1703 – 1784) to create something special. Morell had been reading Love and Religion Demonstrated in the Martyrdom of Theodora, and of Didymus . . .

Rather than another story from Hebrew scripture (Deborah, Saul, Israel in Egypt, Joseph and his Brethren, Joshua, Solomon) or the Apocrypha (Judas Maccabaeus), Morell turned to this legendary story of two martyred saints set in the societal and political struggles between the established Roman state religion and the new faith becoming known as Christianity. . . .

Morell saw how a story focusing on two individuals in this environment could give expression to profound conflicts of loyalties between friends, the struggle between the status quo and new ideas, and the inner anguish over whether to remain a secret Christian, recant Christianity or die for your faith. . . .

Handel considered the libretto for Theodora to be the best and most stimulating he had ever encountered. . . . Julian Herbage once quipped that “Handel’s pagans always have an ear for a catchy tune, and an almost complete ignorance of counterpoint.” By contrast, the Christians get the more profound choruses – often with superb counterpoint.

Biographia Dramatica reports that Handel was asked “whether he did not consider the grand [Hallelujah] Chorus in The Messiah as his masterpiece. ‘No,’ said he, ‘I think the chorus, “He saw the lovely youth,” at the end of the second part in Theodora far beyond it.’” Contemplative choruses can be truly effective for the sensitive listener.

For Kreider’s complete Programme Notes go here. Well worth reading, especially for those of us who won’t make it to Theodora in person.