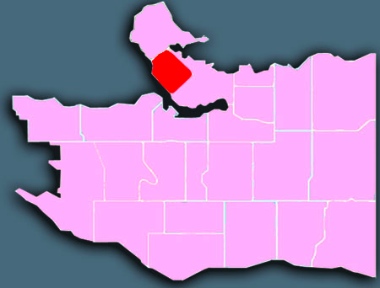 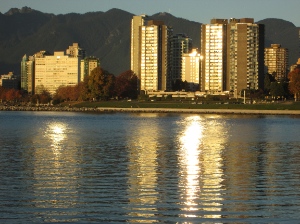 The West End is one of the most densely populated neighbourhoods in North America, comparable to Manhattan. All but 200 of the area’s 29,000 dwellings are in apartment buildings, 77 percent of which have five or more floors. Close to four out of five residents are renters.

Sixty percent of residents are single, but only 39 percent live alone – perhaps because rising rents in this once modest income neighbourhood are forcing people to share housing costs.

Although the West End has a slightly below average number of seniors, it has the second highest concentration of seniors living alone, at 7 percent. It also has the lowest concentration of children and youth in the city: 4 percent, compared to the city’s average of 14 percent (and the region’s 19 percent).

The West End is home to a very substantial gay population and to many language groups found more commonly here than anywhere else in the city.

Whoi Whoi, Chaythoos, Kanaka Ranch. Before there was a Stanley Park, there were villages on the peninsula. Stanley Park was by no means the pristine wilderness that we often imagine when it was designated as a park in 1888. In Stanley Park’s Secret, historian Jean Barman tells the story of the Indigenous inhabitants: “Aboriginal people made use of the tongue of land we call Stanley Park for thousands of years” – and no doubt roamed over the West End. 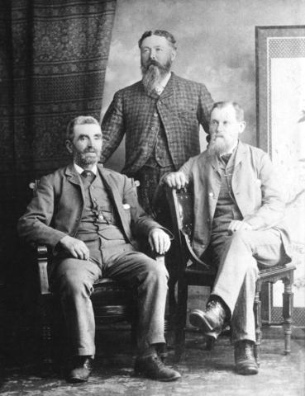 A Yorkshire potter named John Morton saw a chunk of Burrard Inlet coal on display in a New Westminster shop window and wondered if near that coal there might be fine clay suitable for pottery. There was clay, but of a quality suitable only for bricks, and so Morton and two associates – his cousin Sam Brighouse and William Hailstone – preempted (November 3) 550 acres, at a price equivalent to $1.01 an acre, with a view to becoming brickmakers.

They spent, some thought, far too much money for the remote “Brickmaker’s Claim,” and one newspaper report derisively described them as “three greenhorn Englishmen.”) The three greenhorns built a cabin near the north foot of today’s Burrard Street and began to raise cows.

Brighouse later moved out to what is now Richmond, where his name is remembered in several ways, including by Brighouse United Church. Morton apparently laid the cornerstone of First Baptist Church at Nelson and Burrard, and also left money to build Ruth Morton Baptist Church (named after his wife, it was only recently renamed Mountainview Christian Fellowship). 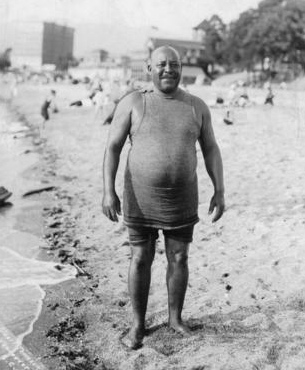 Probably the name most associated with the history of the West End is Joe Fortes, ‘the King of English Bay.’ Born in the Caribbean in the early 1860s, he arrived in Vancouver in 1885. Over the years he trained thousands of children to swim in English Bay.

Davis describes his popularity, and hints at one reason for it:

Fortes . . . was named Vancouver’s Citizen of the Century by the Vancouver Historical Society during the city’s centennial year in 1986 . . .

His funeral at Holy Rosary Cathedral [in 1922] was the most heavily attended in Vancouver history to that time, with thousands outside the packed church. A small fact about Joe that stays with you: he had, for all his life, one small well-thumbed book by his bed, apparently the only book he ever read: The Imitation of Christ by Thomas à Kempis. 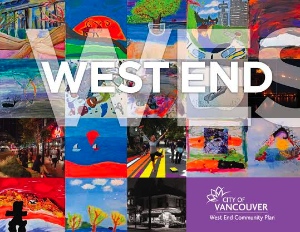 West End Community Plan: The West End Community Plan was adopted by Vancouver City Council November 20, 2013. The exhaustive 124-page plan recognized several key corridors – “generally the newer areas of the community where the majority of new housing and job space has been built over the past 40 years.” The main ones are along Burrard and down Georgia (with a short section on Alberni), and then Lower Robson and Lower Davie.

The plan describes four neighbourhoods: Nelson Heights (moving away from Burrard, to Jervis); Nelson Slopes, leading down to Denman); Beach (between Davie and English Bay); and West of Denman (up against Stanley Park). 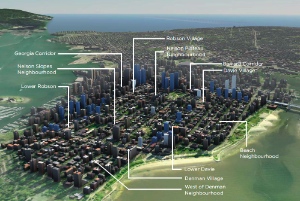 The plan says: “Three distinct, primarily low-rise Villages [along Davie, Robson and Denman] help knit the community together and provide opportunities for locals and visitors alike to shop, work and play during the day and at night.” These will be “strengthened” under the plan.

A November 27, 2015 comment by West End Neighbours (WEN) on the proposed 23-storey Larco Tower at 1688 Davie Street (a block up the hill from Denman) was clearly concerned about the pace and nature of increased density:

This is the second of four new towers on the same block. . . . Be prepared for construction noise and traffic disruptions for the next few years. . . . All this development was unleashed by the West End Community Plan adopted in 2013. City Council pre-zoned the area so that no public hearing is required. The Board cannot deny a development if it meets the zoning requirements, “official development plan,” and guidelines.

In an October 25, 2015 post, WEN quoted former Vancouver director of planning Ray Spaxman, from an email he sent to colleagues in the city’s urban planning and development community:

As time goes by and more and more “spectacular” high rise proposals appear in the newspapers, as do the anxious cries of affected neighbours, I become increasingly appalled at the lack of neighbourliness in our development processes. . . . 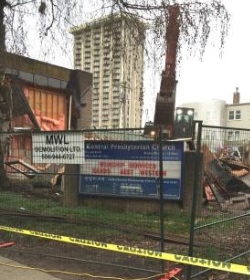 Few churches: There are less than 10 churches located in the West End community. That’s less than one church for each 5,000 people! Many more churches are needed, but it has proved difficult to get established.

St. John’s United Church (1401 Comox) was sold to Westbank Projects Corporation in 2009. The beautiful wood structure was torn down in 2011, and following a battle between the developers and local citizens another highrise took its place.

A 2013 article on this site suggested that city planners had largely ignored faith groups, though probably not intentionally: 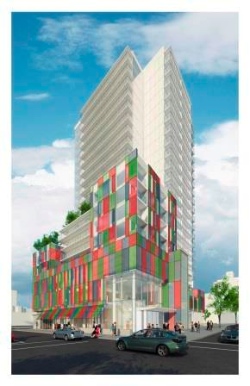 This complex, which includes space for Central Presbyterian Church, is due to be completed in 2018.

Read through the 123-page West End Community Plan released by the City of Vancouver October 22 and you might come to the conclusion that there’s no longer much room for the church in that congested and secular environment.

The comprehensive report covers just about everything one can imagine, from a survey of the three ‘villages’ within the West End to housing, parks, transportation, heritage, arts, culture, local economy, community well-being, energy and climate, utilities and service . . . you get the idea.

So where does the church fit into the report? Nowhere, really.

Renoviction: Rezoning for increased density and ‘renovictions’ (renovations as a pretext for evictions leading to increased rents) are a problem. With four out of five residents of the West End renting, this has been a significant issue for years. Many renters are elderly pensioners who have lived for decades in this historically lower rent section of town. Other communities with high percentages of renters – Mount Pleasant, Fairview, Kitsilano – face similar problems.

We are in the midst of a wave of church planting in the downtown core. Churches such as Westside at The Centre; Artisan at the Central Library; St. Peter’s Fireside at Robson Square; The Crossings on Smith Street; Vancouver West in the Waterfront district; and Trinity Central in Yaletown have all taken root over the past few years.

There will likely be more church plants in the West End in the near future.

Here are some ways in which West End churches are linked to their neighbourhood. We would love to hear about other examples: 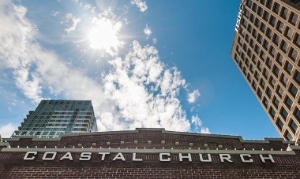 Coastal Church has taken advantage of the airspace above its building. Photo by Dave Koop.

* Coastal Church, on Georgia between Thurlow and Bute, works with Whole Way House at the Avalon Hotel in the Downtown Eastside, and also with Union Gospel Mission and the Vancouver Food Bank. One of Coastal’s most creative initiatives is Business by the Book, “where people from the business community come [for lunch at the Law Courts Inn Restaurant] to be inspired and empowered by amazing leaders who fearlessly share their triumphs and tribulations and how their faith in God has positively impacted their personal and business lives.”

* St. Paul’s Anglican Church, in the centre of the West End, on Jervis, blocks in from Davie, operates an Advocacy Office, which “offers services of information and support to persons experiencing difficulties in day-to-day living. These issues include accommodation needs, landlord-tenant disputes, health and disability issues, and access to social benefits and other government services.” The church is also closely involved with the Our House drug and alcohol recovery program, which “holds a place for homeless and seemingly hopeless addicts.”

* The Courier did several articles on West End as part of a year-long series of articles on Vancouver neighbourhoods in 2013/2014.

* The city has a West End page.

← Regent Exchange: ‘Churches and the Housing Crisis’
The Vancouver Consultation →